skip to main content
Return to Fordham University
You are at:Home»University News»Alex Trebek, Jeopardy! Host and Generous Benefactor to Fordham, Dies at 80
Trebek at the 2011 Commencement (Photo by Chris Taggart)
Together with the nation, the Fordham community mourns the loss of Alex Trebek, PAR ’13, host of the immensely popular game show Jeopardy! and generous supporter of the University, who died on Nov. 8 after living publicly with pancreatic cancer for more than a year. He was 80. 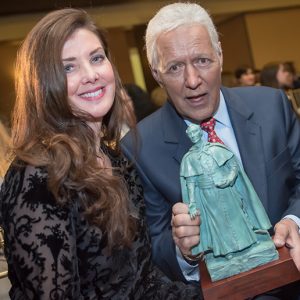 Jean and Alex Trebek received the Founder’s Award this past January. (Photo by Kait McKay)

“Much as we loved Alex as the award-winning television host of Jeopardy!, I believe he came to mean more to Fordham—and to the public—as an educator and a spokesperson for the power of education,” said Joseph M. McShane, S.J., president of Fordham. “He gave knowledge and expertise a cachet among a broad audience in a time when those qualities seemed under assault in popular entertainment. Today we, and the world, grieve with his wife, Jean, and his children, Emily, Matthew, and Nicky, over the loss of this exceptional and compassionate man.”

From the moment Trebek arrived at the Rose Hill campus in 2009 with his son Matt Trebek, FCRH ’13, a prospective student at the time, to more than seven years after Matt graduated, Trebek and his wife Jean have been model University parents. Both gave generously, not just to the Alex Trebek Endowed Scholarship Fund they created, but of their time as well.

In 2011, the same year the University bestowed an honorary degree upon him, Trebek set time aside time from his busy schedule to host a Q&A with students from Rose Hill. He was celebrating 50 years in the industry at the time.

“There is a line that I heard not too long ago that goes, ‘Find something you’re good at, and if you really like doing it, you will never have to work a day in your life,” Trebek told the students. “That’s the way it’s been for me and broadcasting.”

His generosity of time continued through his illness, as was noted by Jeopardy! contestant Ed Condon, FCRH ’84. Cordon was a two-day champion on episodes that aired in October 2019.

“Alex Trebek is incredible because he’s doing all this stuff he doesn’t have to do,” Condon said at the time, noting that despite his illness Trebek spent hours with contestants and the studio audience, talking to them and answering their questions. 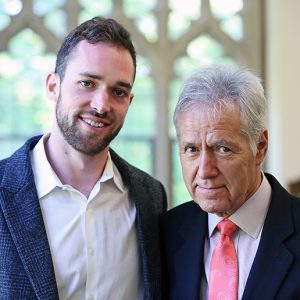 His steadfast dependability was on display on Jan. 7 when the Trebeks were honored with the Fordham Founder’s Award at a special award ceremony held in Los Angeles. Trebek arrived straight from the studio, still in makeup after recording five episodes of Jeopardy!. It was the first time the statuette of Fordham founder Archbishop John Hughes was presented outside of New York City.

The award citation noted that in his more than three decades of hosting Jeopardy! Trebek received numerous accolades, including six Daytime Emmys (now seven) and a Lifetime Achievement Award from the Television Academy. In 2011, the show received a Peabody Award for “encouraging, celebrating, and rewarding knowledge” while maintaining “a model of integrity and decorum.”

On bestowing the Founder’s award, Father McShane underscored what Trebek has meant to millions of viewers.

“He’s a brilliant man who is the nation’s schoolteacher, let’s admit that. As the host of Jeopardy!, he is our schoolteacher and we look forward to going to school every evening,” he said.

Trebek was visibly moved during his acceptance speech at the event. He spoke of how his Catholic upbringing helped him amidst the cancer treatments.

A native of Sudbury, Ontario, Trebek attended Jesuit grade schools that laid a foundation for the two degrees in philosophy he eventually earned at the University of Ottawa. In a 2008 interview with CBC, Trebek was asked why he studied philosophy. He provided a rather Jesuitical response.

“I got into philosophy to figure out what on earth I was doing on earth,” he said.

He said in the interview that he had “drifted into broadcasting” and found it to be a good fit. Yet, even as his chosen profession took him toward gameshows, he said he favored competitions that required contestants “to win the old-fashioned way, earning it.”

Trebek was first noticed by American viewers in 1973 when he hosted the NBC game show Wizard of Odds.  After several other hosting roles, he was chosen to host Jeopardy! He was a hit with viewers and soon became a pop culture icon, setting the world record for hosting the most episodes of a game show.

Lance Strate, Ph.D., professor of communication and media studies, said that for many Americans, having Trebek in their homes night after night gave them a sense that they knew him.

“We knew him parasocially, which is to say we knew him, but he didn’t know us,” said Strate. “Alex Trebek is the teacher we all wanted to have growing up.”

Strate said that the game show host also evoked an earlier time when radio was the primary medium and quiz shows celebrated the spoken word. 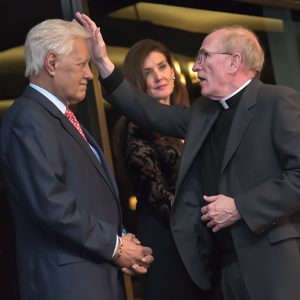 “Jeopardy! has been a throwback in contrast to recent game show formats that have morphed into reality TV and are more visual and action-oriented,” he said. “With the focus on text and words, that put much more emphasis on the host. He became a much more powerful presence because of that, and that’s also why his loss is felt so profoundly.”

He added that Trebek also represented the idea that one could get ahead by the strength of one’s mind rather than by luck.

“In a sense, he symbolized the idea of college itself—that education is important, and it is something that continues,” he said.

Throughout his career, Trebek led a rich family life. Over the years, he remained a devoted father to Nicky Trebek, whom he adopted during his first marriage to her mother, Elaine Callei Trebek. The couple separated in the early ’80s.

He met Long Island native Jean Currivan—a businesswoman, author, and spiritual counselor—at a party in New York in 1988. They married two years later and had two children together: Emily and Matthew. The siblings both chose Jesuit schools for college. Emily graduated from Loyola Marymount University in Los Angeles in 2015 and went on to a career in real estate. Matthew graduated from Fordham College at Rose Hill in 2013 and, like his father, earned a degree in philosophy.

Matthew now lives in Harlem and owns and runs three restaurants there: Oso, a Mexican restaurant at 140th and Amsterdam Avenue; Pizza by Lucille’s; and Lucille’s Coffee & Cocktails. The last two are named for his grandmother and located at 150th Street and Frederick Douglass Boulevard. His chosen university and neighborhood have become part of his parents’ lives as well.

“I have seen the benefits of a Fordham education close up,” Trebek told Fordham News in 2015. “My son’s career at the University not only sharpened his intellect but helped him develop as a leader and a well-rounded person.”

In a 2016 interview with Fordham Magazine, Matthew said that while his father doesn’t necessarily share in devotion to food—“He would be fine eating chicken, white rice, and broccoli for the rest of his life”— he shared an appreciation of his son’s adoptive home. 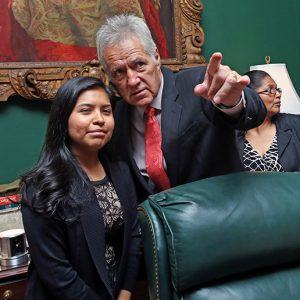 In 2015, the Trebeks established the Alex Trebek Endowed Scholarship Fund with a gift of $1 million.  Four years later they made an additional gift of $1 million to the fund, which supports students from North Harlem and East Harlem.

At the ceremony, Jean said that she and her husband find the very idea of how a scholarship can change a life “awe-inspiring.”

One of the Trebek scholarship recipients, Joel Gomez FCRH ’19, said that even though he knew Trebek was ill, the news of his passing still came as a surprise.

“Just seeing the news, it comes as a shock. He’s Alex Trebek, he’s been hosting Jeopardy! for as long as I’ve been around,” said Gomez. “The first thing I thought about was the scholarship that I was gifted through him. I tweeted out thank you.”

Gomez attended a high school in the South Bronx where the student body was “about 98 percent men of color.” He stressed that the gift’s geographic emphasis was good for him and the University as a whole.

“It’s important to see that the University caters to different students,” he said. “Giving help to students like me lets me absorb different cultures and that experience is really important.”

Gomez took note of Trebek’s Canadian background and appreciated how the gift crossed boundaries and cultures.

“I think it’s exciting, he grew up in a completely different culture and to give back later to a whole different community—it’s pretty dope,” he said.

In their philanthropy, the Trebeks have supported World Vision, an international anti-poverty organization, as well as many other humanitarian and educational organizations. They also established a forum on public policy issues and an innovation/challenge fund at the University of Ottawa.

“You think Alex Trebek is a good man; you don’t know the half of it,” Father McShane said at the Founder’s ceremony in L.A. “He teaches us about how to live each day with purpose, with focus, with determination, with love, and without being obsessed with oneself. All that he does is outwardly directed.”

At the L.A. event, Father McShane said that by publicly sharing his journey with cancer, Trebek had actually evolved his role to that of minister. He then asked the crowd to say the Lord’s Prayer for Trebek and his “ministry.”

The gesture threw Trebek slightly off-balance before he regained composure by holding his wife’s hand and entering a state of prayer.

In his acceptance speech, he reflected on what gives meaning to one’s life.

“If you have compassion in your heart, everything is possible, peace everywhere is possible,” Trebek said. “If we are able to affect society in a positive way then our lives will not be for naught.”

Trebek is survived by his wife and children. His final episodes of Jeopardy! will air through Dec. 25. 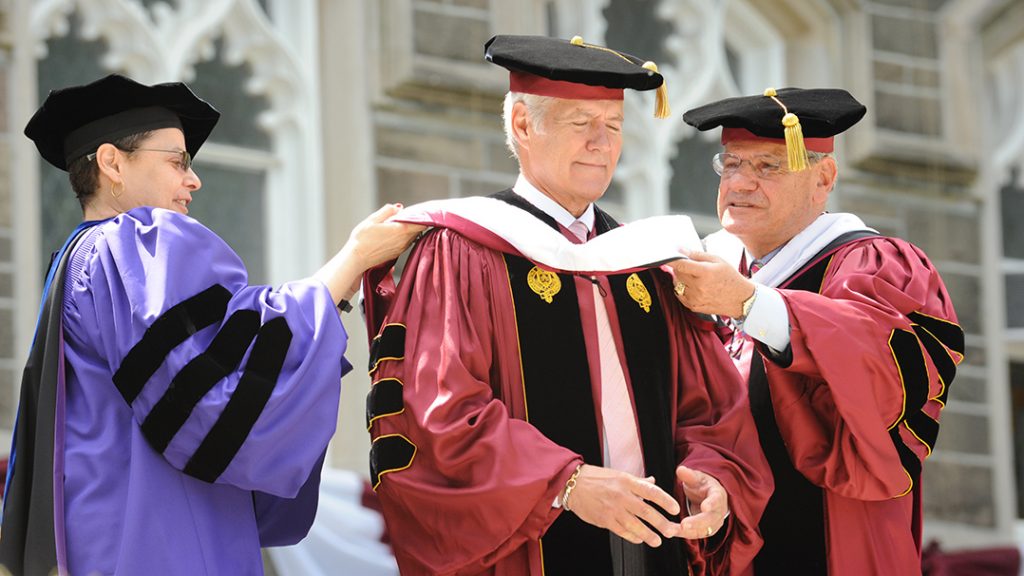 Trebek takes on the doctoral hood in front of Keating Hall at Fordham’s 2011 Commencement. (Photo by Chris Taggart)