skip to main content
Return to Fordham University
You are at:Home»Arts and Culture»This Tremendously Popular Quiz Show Host Has Endowed a $1 Million Scholarship at Fordham.

Who is Alex Trebek?

Jeopardy! host Alex Trebek is donating $1 million to endow a scholarship for undergraduates at Fordham. The Alex Trebek Endowed Scholarship will provide financial aid support to current, full-time and/or part-time students who live in North Harlem—the section of Manhattan north of Central Park. 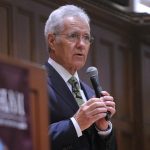 “We are deeply grateful for Mr. Trebek’s generous gift, not least because it means we can offer a Fordham education to students who might otherwise not afford one,” said Joseph M. McShane, SJ, president of the University. “It is a welcome gift, but not a surprising one. Mr. Trebek has a long—if not well-known—history of giving where the need is greatest, and this scholarship is characteristic of his desire to do the most good for the most people.”

In addition to hosting Jeopardy!, Trebek supports a number of charities and educational organizations, including the National Geographic Society, the USO, World Vision and WonderWork.

The first Trebek Scholar is Estefania Cruz, a history major at Fordham College at Rose Hill, Class of 2017. Cruz commutes to Fordham from her family’s home in Harlem, where she tutors low-income students. She speaks Spanish and French, in addition to English, and hopes to add another language soon. Cruz is already planning on graduate school for a degree in clinical social work. “I hope to help people, especially the most vulnerable, overcome serious social problems, so they can lead productive and fulfilling lives. I plan to help my community in any way I can,” she said. 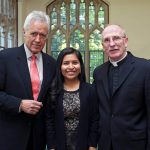 Trebek and his wife, Jean Trebek, have two children: Emily, Loyola Marymount University Class of 2015, and Matthew, who graduated from Fordham College at Rose Hill with a degree in philosophy in 2013, and is opening a Mexican restaurant, Oso, in North Harlem this year.

“I have seen the benefits of a Fordham education close up,” Trebek said. “My son’s career at the University not only sharpened his intellect, but helped him develop as a leader and a well-rounded person. My hope for this scholarship is that it helps many other deserving students have that same transformational experience.”

Trebek received an honorary degree from Fordham in 2011, and entertained students and faculty in “An Evening of Answers and Questions with Alex Trebek” at Rose Hill in September of the same year.

Trebek is a native of Sudbury, Ontario. He graduated from the University of Ottawa before going to work for the Canadian Broadcasting Company, and began his U.S. broadcasting career in 1973. He has hosted Jeopardy! for 32 years, winning five Daytime Emmy awards for Outstanding Game Show Host and a Peabody Award.

Two years ago, he received a Lifetime Achievement Award from the Television Academy. Trebek has a star on both the Hollywood Walk of Fame and the prestigious Canadian Walk of Fame in Toronto, making him one of only a handful of people honored by both the United States and Canada.