skip to main content
Return to Fordham University
You are at:Home»Inside Fordham»Questions, Answers and Insight Mark Evening with Alex Trebek

Suppose you were playing Jeopardy! and were given this answer: 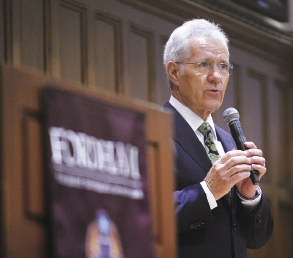 Alex Trebek mixes insight and wit in his appearance at Rose Hill.
Photo by Chris Taggart

“He is a multiple Daytime Emmy Award-winner in his 28th year of hosting one of television’s most popular game shows.”

The correct question would be, “Who is Alex Trebek?”

As the Fordham community learned in a wide-ranging discussion with Trebek on Sept. 29, other Jeopardy!-style answers would also apply to him. Such as:

“His father was an emigrant from the Ukraine who came to Canada in the 1920s and became a pastry chef and restaurant owner.”

“He joined the Canadian Broadcasting Company (CBC) on a whim after he was unable to pay his university tuition bill.”

“He once had a lengthy conversation with Queen Elizabeth II of England, though the very next day she didn’t remember meeting him.”

Those and other personal reflections were part of Trebek’s presentation at Rose Hill, which touched on his family, career and hopes for the future.

Though known as a consummate intellectual who seems completely at home on a game show seen nightly by millions of people, Trebek admitted to feeling some unease at the outset of the evening.

“This is not something I do, usually,” he said. “Tonight, I have to give answers after the questions—not before. That’s not familiar territory for me.”

Yet his ability to quote Mark Twain and Confucius with equal aplomb left little doubt as to Trebek’s intellectual bona fides.

He spoke at length about his father, who he characterized as “one of those people who liked everyone, and was liked by everyone.”

“In the 40 years I knew him, to the best of my knowledge, we never shook hands,” Trebek recalled. “Any time we greeted each other or parted, it was always a hug and a kiss.”

Growing up in Canada, he was educated in primary school by Jesuits and Gray Nuns. He then attended the University of Ottawa Prep, where his teachers were Oblates of Mary Immaculate.

“They were tough priests, but they were great. We had wonderful times together,” Trebek said. “Whatever character I have was developed in those years at the University of Ottawa Prep.”

He noted that his son, Matthew, who attends Fordham, and his daughter, Emily, who studies at Loyola Marymount in Los Angeles, carry on the family tradition of Catholic higher education.

In his junior year at the University of Ottawa, however, Trebek was forced to suspend his studies because he was unable to pay his tuition, which he recalled was “a whopping $500 a year.”

He applied to the CBC as a part-time announcer and was offered a permanent position the following February. He accepted with the caveat that he be allowed to finish his philosophy degree.

Despite the unintentional start to his career, he has ascended to the highest levels of broadcasting and celebrated his 50th anniversary in the industry this year.

“There is a line that I heard not too long ago that goes, ‘Find something you’re good at, and if you really like doing it, you will never have to work a day in your life,” Trebek said. “That’s the way it’s been for me and broadcasting.”

In a lengthy question-and-answer session, he was asked whether he would be a successfulJeopardy! contestant and how much longer he will continue in the role that has made him a television icon.

“If I were to be a contestant on Jeopardy! now, I wouldn’t do all that well,” he said. “I would do well against my peers, namely, senior citizens. But I have maintained for years that a good 30-year-old would clean my clock.”

He confided that he was unsure whether he would remain with the show when his contract expires in a little more than two years. He admitted, however, that after nearly three decades as host, he is still having a good time.

He closed the evening with his thoughts about emerging technology, some of which was demonstrated recently on Jeopardy! when the IBM-built Watson supercomputer bested two of the show’s all-time champions.

“We should never be afraid of the future, because we are going to figure out ways to deal with it,” he said.

“If you’ve been following the Republican candidate debates, most of them make it sound like we don’t have enough bright people in America—but we do. We have them in all walks of life, and they are the ones who are going to make changes that will benefit our lives and all of humanity.

“So we should not despair,” he said. “We should have hope for the future.”