skip to main content
Return to Fordham University
You are at:Home»University News»Trebek Scholarship Expands to East Harlem Students With Additional $1 Million
Trebek meets with Fordham students in 2011.
Their son Matthew may have moved on from Fordham College at Rose Hill, but Alex and Jean Trebek have remained committed to the institution he called home for four years. First, they established the Alex Trebek Endowed Scholarship Fund with a $1 million donation for students hailing from Harlem. And now, with an additional $1 million gift, they’ve expanded the scholarship’s geographic pool to include candidates from East Harlem. 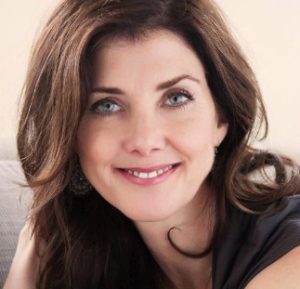 “It is hard to overstate the impact of Alex and Jean’s generosity,” said Joseph M. McShane, S.J., president of Fordham. “Their gifts ensure a student body that is more diverse in every way, better prepared to excel as students at Fordham and as leaders upon their graduation. The University—and its students—owe a debt of gratitude to the Trebeks.”

Reached by phone at the couple’s home in Los Angeles, Jean Trebek said that there were several things that motivated the couple to continue supporting students from a neighborhood on the other side of the country, not least of which was the concept of paying it forward.

“If we can help them, they will help others, and there’s that beautiful rippling effect,” she said.

‘A Soft Spot for Harlem’

The Trebeks have two children: Emily, Loyola Marymount University Class of 2015, and Matthew, who graduated from Fordham College at Rose Hill with a degree in philosophy in 2013. 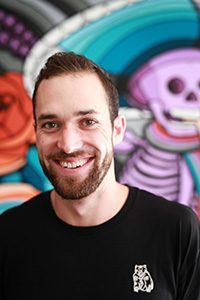 When Alex first established the scholarship fund with Jean in 2015, he said the benefits of Matthew’s Fordham education were clear.

“My son’s career at the University not only sharpened his intellect but helped him develop as a leader and a well-rounded person,” said the Jeopardy! host. “My hope for this scholarship is that it helps many other deserving students have that same transformational experience.”

Thanks to their son, the Trebeks are no strangers to Harlem. Matthew has gone on to own two restaurants in the neighborhood: Oso, a Mexican restaurant at 140th and Amsterdam Avenue, and the soon-to-be-unveiled Lucille, named for his grandmother, at 152nd Street and Frederick Douglass Boulevard.

“We have a soft spot for Harlem,” said Jean.

Fordham’s first Trebek scholar, Estefania Cruz, commuted to campus from her home in Harlem. She graduated from Fordham College at Rose Hill in 2017 with plans for a career in social work. The current scholar, Joel Gomez, is on track to graduate from Fordham College at Rose Hill next year with a degree in international political economy. Gomez said he first received the scholarship in his junior year, which helped him clear that year’s loans. He has received the funds again for this year. 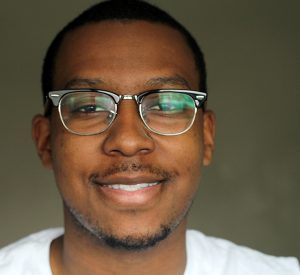 When he first came to Fordham, Gomez said he wasn’t entirely aware that the campus would be so different from All Hallows High School, his alma mater in the South Bronx, where the student body was “about 98 percent men of color.”

“It’s important to see that the University caters to different students,” he said. “Giving help to students like me lets me absorb different cultures and that experience is really important.”

He said at first, he was a little stunned that the scholarship came from the famous game show host. He later took note of Trebek’s Canadian background and appreciated how the gift crossed boundaries and cultures.

“I think it’s exciting, he grew up in a completely different culture and to give back later to a whole different community—it’s pretty dope,” he said.

Jean said that after meeting one scholarship recipient’s parents, she felt a maternal kinship.

“I think anytime we help our children, you don’t feel alone, you feel a sense of oneness, a sense of engagement, and a connectedness,” she said.

Just as Harlem is often called the cultural capital of black America, home to the Apollo Theater and Schomberg Center, East Harlem is often referred to as El Barrio and is a cultural hub of Latino New York, home to Museo del Barrio and several other Latino cultural institutions and nonprofits. It is also home to a significant population of students in need of scholarships. 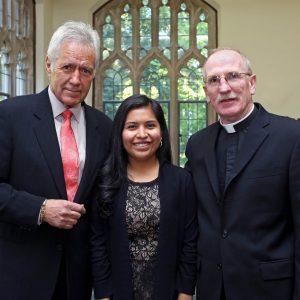 Jean said that the couple decided to expand the scholarship’s neighborhood parameters after conversations with Father McShane.

“Once it was proposed, we had no reason not to expand, because [Fordham’s] philosophy is that education is at the root of living a life of compassion,” she said. “You need the mind and the heart and that’s a beautiful thing that Fordham does.”