skip to main content
Return to Fordham University
You are at:Home»Fordham Magazine»Matt Trebek: Bringing Mexican Street Food to Harlem
Above: Matt Trebek, FCRH ’13, co-owner of Oso. Photos by B.A. Van Sise, FCLC ’05
Wearing a T-shirt and ballcap, Matt Trebek sits at a table at Oso, the Hamilton Heights Mexican restaurant he co-owns, explaining how he got involved in the hospitality industry. As he speaks, bartenders serve up drinks from a tequila-and-mescal-heavy cocktail menu he helped develop. To his left, a colorful graffiti mural like the ones he’d seen in Mexico City adorns one of the walls. Old-school hip-hop, funk, jazz, and soul help create a relaxed vibe—another decision he had a hand in. And across from him, diners sit in wooden banquettes that he built himself.

Indeed, for Trebek, owning a restaurant is about much more than food.

“There was just something about the hospitality industry that I fell in love with,” he says. “It’s great because it’s very free form in that it allows you to venture out into so many different fields: design, food, drinks, music, graphic design, and even just talking to people.” 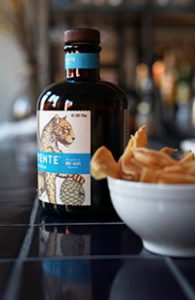 Trebek had bartended at various Manhattan spots before graduating from Fordham in 2013, but it was a stint serving drinks at the since-shuttered restaurant Willow Road in Chelsea that set into motion his career as a restaurateur. While there, Trebek became enamored not just with mixology but with the architectural design of restaurants. He connected with the designer who had worked on Willow Road’s interior, and began working as a carpenter for his company. Eventually, Trebek and his business partner—the guy who’d shown him the ropes at the first of his bartending gigs in the city—had an idea for a restaurant of their own. And this past May, after three years of planning, the pair opened Oso, a 44-seat restaurant specializing in Mexican street food and craft cocktails.

Growing up in Los Angeles, Trebek—the son of Jeopardy! host Alex Trebek—would go to the local farmer’s market every Sunday to get carne asada tacos and quesadillas. He developed a love for the cuisine, and in talking with the vendors, learned about their recipes and style of cooking. But after moving to New York, he found the options for Mexican food lacking. “You’ll have a chef who will put his own spin on it, which is great, but it kind of loses its authenticity of being Mexican street food,” he says of the cuisine characterized by dishes that are quick to make and eat, and relatively inexpensive.

Trebek made two scouting trips to Mexico City, and Oso’s menu is inspired by the food he encountered. “The idea behind Oso was to take the street fare we loved [in Mexico City] and turn the dining experience into something communal rather than personalized,” he says. Everything in the restaurant is made from scratch, and he says the restaurant works with a family from Puebla to make sure things remain as authentic as possible. (The restaurant even makes two types of mole using recipes handed down by that family.) 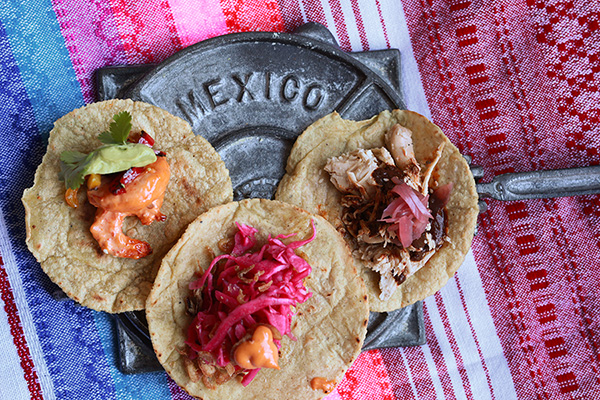 Trebek says he doesn’t get his palette from his famous dad. “He would be fine eating chicken, white rice, and broccoli for the rest of his life,” he says. But his father—“a handyman at heart,” according to Matt—helped out in other ways, like following the construction progress and inspecting the space when visiting New York.

The opportunity to open a restaurant in Harlem that could become part of the fabric of the community was a big draw for Trebek. “Early on when we were scoping out spaces, we heard of a bar called Harlem Public,” he says. “We went there and saw such a strong community behind this place. It was seeing that type of vibe and support that really drew us to opening in Hamilton Heights.” There’s a strong sense of community within Oso’s leadership group, as well—both the restaurant’s chef and the project manager who oversaw the build-out live in the Harlem apartment building that Trebek owns and also lives in. 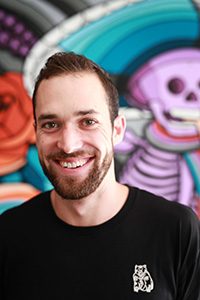 Because Trebek hired the same designer who’d worked on Willow Road, Oso includes some of Trebek’s favorite features from that space, from the open kitchen to the raw aesthetic that here takes the form of unfinished floors, faux-concrete walls, and reclaimed wood. And Trebek’s Mexico City visits helped inform the décor, too, from the graffiti mural to the the faux cow skull hanging opposite the bar to the greenery that helps hide some of the air conditioning ducts.

Trebek says he’d love to open another restaurant someday, and has even thought about what such a place might look like (more of an emphasis on the bar, he says). But for the moment, he’s focused on Oso. “Right now it’s kind of all hands on deck here, just trying to make this as perfect as it can be,” he says.

—Joe DeLessio, FCLC ’06, is an associate editor at New York magazine’s website and a frequent contributor this magazine.