skip to main content
Return to Fordham University
You are at:Home»Education and Social Services»Fordham and Bronx Schools Collaborating on Air Quality Project

Through a new initiative called Project FRESH Air, Fordham is working with local middle and high schoolers to combat climate change and generate new air quality data in their communities.

“We want to set up a network of air quality sensors around the city and map out the air quality—particularly in the Bronx—and help students become scientifically literate activists in their communities,” said Stephen Holler, Ph.D., chair and associate professor of Fordham’s physics and engineering physics department, who is co-leading the project with Usha Sankar, Ph.D., an advanced lecturer in biological sciences. “Through our project, we can start a dialogue about climate change and say, ‘Let’s do something to fix it together.’”

Air pollution triggers many respiratory illnesses. One in 13 Americans have asthma, according to the Asthma and Allergy Foundation of America. Among the five New York City boroughs, the Bronx has the highest percentage of asthma diagnoses for children up to age 12, as well as the highest child asthma hospitalization rates.

The goal of Project FRESH Air (Fordham Regional Environmental Sensor for Healthy Air) is to combat those statistics with education.

Holler has started setting up a network of PurpleAir air quality sensors in middle and high schools in the Bronx and upper Manhattan, including Jonas Bronck Academy, All Hallows High School, and Cristo Rey New York High School. Each sensor—not just the project sensors in the city, but independent Purple Air sensors worldwide—records data 24/7. The data is viewable on an interactive map in real time. 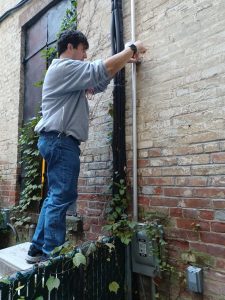 The project garners interest because air quality is an issue people can relate to, Holler said.

“I don’t think that many people in the Bronx are interested in the fact that it’s going to be one or two degrees warmer in a few decades. If you’re living paycheck to paycheck and worried about your kids, that’s not your high priority, right? So we’re tackling this issue by looking at it through an air quality perspective,” said Holler, who has previously worked with local students on climate change projects. “Air quality will degrade as the climate changes. We’ll have more pollution and particulate matter in the air from combustion sources, vehicles, and the urban environment, which irritate the lungs and aggravate asthma. But this is an immediate problem that we can address.”

The FRESH Air team, which includes Fordham faculty, undergraduates, and middle and high school educators, is now working on ways to incorporate the sensors and their data into middle and high school curricula. Students will be able to build their own handheld sensors with special kits. They will also be tasked with plotting air quality data from their sensors and searching for trends.

“They can plot the data in Microsoft Excel or Google Sheets and correlate it with factors like weather. Was the air quality better on this day or another? Was there a holiday? And they can start to understand the dynamics and patterns that are happening in their community,” Holler said.

This fall through a virtual webinar, the FRESH Air team introduced the project to students and families at Jonas Bronck Academy, located one block away from the Rose Hill campus.

“The day after the informational session, our students were asking questions to all five of us teachers,” said Alexiander Soler, a seventh grade science teacher at JBA. “‘What is air quality? How does that relate to us? How does it connect to asthma?’”

“These sensors are effectively going to be permanent installations,” Holler said. “Over the next two to three years, we are looking to have about 25 schools on this project.”

The project originally emerged from the Higher Education Incubator and Think Tank led by Eva Badowska, Ph.D., dean of the faculty of arts and sciences and associate vice president for arts and sciences, and Anne Fernald, Ph.D., professor of English and special adviser to the provost, before the pandemic. It is being largely funded by James C. McGroddy, a former senior vice president and director of research at IBM who wants to promote STEM education, especially for minority and underserved populations.

“The purpose of science is to gain an understanding of the natural world and its impact on our lives. This project will create a real scenario that our students can identify with, and hopefully increase their interest in science and becoming problem-solvers,” said Soler. “It will allow our students to see how science truly affects their lives.”