skip to main content
Return to Fordham University
You are at:Home»University News»Refocused on Reimagining Higher Education
A ReIMAGINE Higher Ed gathering held on March 4 from before the meetings moved online(Photos by Argenis Apolinario)
For the past semester, two groups from a new University initiative titled ReIMAGINE Higher Ed have been meeting regularly in an effort to reimagine Fordham—and its place as the Jesuit University of New York—for the 21st century. While the initiative initially dealt with challenging trends facing higher education, their work was somewhat redefined—though not disrupted—by the COVID-19 outbreak. The initiative was initially funded for three years, but due to the crisis, the funding from CUSP had to be pulled. Nevertheless, the group continued to meet and produce a host of new proposals and timely ideas for the future of the University.

At a Feb. 18 event launching the initiative, Provost Dennis Jacobs, Ph.D., said that Fordham is far from immune to national “trends and concerns.”

“I’m uplifted that Fordham is taking time to reflect on what the challenges are that lie ahead and is reimagining together how we prepare students for a world in flux,” he said in what would turn out to be a more prescient statement than he might have imagined.

The initiative is split into two groups. There is a reading group led by Eva Badowska, Ph.D., dean of the faculty of arts and sciences, and Kendra Dunbar, assistant director for equity and inclusion for the Office of the Chief Diversity Officer. That group acts as a think tank, exploring pedagogical solutions inspired by various readings assigned each week and the University’s Ignatian principles. It’s composed of faculty and staff from across the University, including deans and professors from all the schools as well as representatives from IT, finance, enrollment, development, mission integration, and the libraries.

The second is an incubator group led by Anne Fernald, Ph.D., professor of English and special adviser to the provost, and Roxana Callejo-Garcia, associate vice president for strategic planning and innovation. The incubator is composed of administration, faculty, staff, graduates, undergraduates, and members of the community. From classroom inequities to climate change to community-engaged course work as part of the common core, the incubator was formed to propose a variety of practical ways that Fordham can address the pressing issues facing higher education within the community, which includes its Bronx neighbors.

The incubator is broken into five subgroups that presented their proposals at a ReIMAGINE Incubator Showcase that took place on April 21 via Zoom. More than 275 attended, including viewers from Qatar and Trinidad. The showcase featured short video presentations of the proposals with a Q&A for the presenters after their presentation:

Initially, there was funding in place to implement at least one of the proposals, but with the current crisis forcing the University to constrain resources, the ReIMAGINE management team is looking for ways forward. Each project, if chosen for implementation, would have taken a year to plan out, and all are relatively inexpensive, said Fernald. For example, Project FRESH Air might cost about $10,000 to execute, plus administrative time and effort.

“After the presentations are made, we think about implementation of a proposal, as well as how to continue this creative energy,” said Fernald. “There’s the great hunger to see it continue. This isn’t over, but it’s going to have to take a new shape.”

Indeed, many of the participants in the working group testified that the process has changed their views of Fordham. 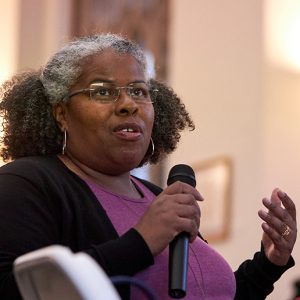 Judith Insell, director of curriculum and artists development at the Bronx Arts Ensemble, has worked with Fordham for years. The ensemble’s professional musicians play at Fordham’s Lessons and Carols celebration and Easter Mass each year.

“It’s been really insightful, in all the years I’ve been working with Fordham I never had the chance to think about the Jesuit connection, that was new for me,” she said.

Fordham College at Rose Hill senior Bella Wood said she felt like the student voices were being heard in a concrete way.

“After four years of being an undergraduate, I could just come out and say ‘These are our qualms’ to faculty and students of all ages and not have it be like we were just bemoaning things,” she said.

Fernald said the process has been hopeful and positive and that it’s important to think about the future with hope.

“I’ve had more than a few people say how inspired they’ve been by learning the extent that innovation is possible at Fordham and how that has renewed their faith and hope about the future of the institution,” she said.

FCRH junior Andrew Souther blogged about how inspired he was that the groups continued to meet unabated.

“The Reimagine Higher Ed leadership team was clearly putting in so much effort to transition our [incubator]work online, and I felt compelled to match that effort with whatever I could manage,” he wrote.

The Show Must Go On 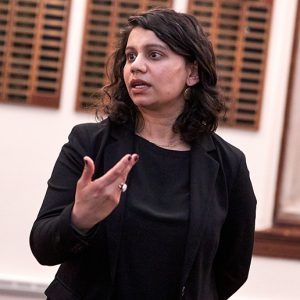 NYU’s Chandani Patel, Ph.D., spoke on equity and inclusion at the March 3 event.

In the weeks leading up to the incubator’s April 21 showcase, both groups met in person and eventually online. At an initial Zoom meeting held on March 24, members were on track to discuss that week’s readings and assign the various tasks needed for completion. Yet, the work had taken on a new dimension, significance, and urgency, participants said. Badowska summed it up her opening remarks.

“The world has changed since we last saw each other,” she said plainly. “This is a crisis that is all-consuming and that includes academia.”

Badowska acknowledged that everyone present was concerned for those who were not able to attend the meeting and for those who had lost loved ones. She said the crisis had made their efforts all the more significant, even though the situation felt like a “very cruel experiment.”

The reading group members were all in the throes of learning new technologies, some for teaching and others for meetings. The professors in the group agreed with marketing professor Sertan Kabadayi, Ph.D. when he stressed there is a distinction to be made between remote learning that they and their students had adapted to and courses designed for online learning. 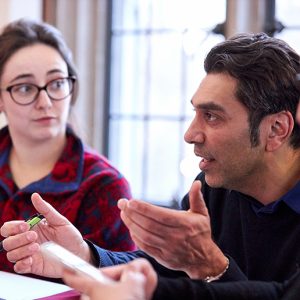 However, all agreed that interaction with students must be maintained.

“The question is how do you express empathy with these tools,” said Sharif Mowlabocus, Ph.D., professor of communication and media studies.

“You need to be able to show compassion and remember that it’s a human in charge of the technology and not the other way around,” he said.

Mowlabocus reflected on the group’s recent reading that focused on “robot-proofing” one’s career.

Samir Haddad, Ph.D., associate professor of philosophy, pointed out that that the digital shift was well underway before the crisis and that a large part of the population is not able to participate.

“There are questions of equity and we need to make sure that these changes don’t harm people,” he said.

The Future Is Now

Both Badowska and Fernald were acutely aware that members of the group had been directly affected by the virus. Preceding the Incubator Showcase, Badowska said that given the environment, it felt almost unethical to talk about the future when so many were still suffering. But a community had solidified amidst the crisis, she said. With the funding pulled, figuring out the future for that community would be complex, but efforts were underway. Initially, the three-year plan was to replace group members each year.

“Now, we’re thinking more about the need for continuity because we’ve created knowledge together, but at the same time to figure out how we need to adjust our purposes and goals,” said Badowska, adding that any future effort would obviously be leaner.

She said the crisis has altered everyone’s sense of time.

“We talk about the future as if it’s to come and give ourselves over to the safety of the present moment, but the safety of that moment has been removed and future is here, it happened to us,” she said. “The fundamental adjustments to higher education that we’ve been discussing are needed now.”

She said the crisis has revealed a need for better integration of interpersonal and online teaching, issues that had been discussed in the reading group. She said that the moment of “Zoomtopia” had already passed so that questions of technology are now merging with questions of pedagogy.

“How do we engage students and how do we feed our community virtually? That was not a question before,” she said. “There’s a newly emerging appreciation, maybe more than we realize, of how desperately our students miss that community and each other.”