skip to main content
Return to Fordham University
You are at:Home»University News»Author Mary Higgins Clark, Alumna and Former Trustee, Dies at 92
“Take yourself seriously enough to do your best job,” Clark told students at a 2017 lecture at the Lincoln Center campus. “And stick with the dream.” Photo by Dana Maxson
Mary Higgins Clark, FCLC ’79, a former Fordham trustee and prolific writer known worldwide as the “Queen of Suspense,” died on Jan. 31 at age 92. Her publisher, Simon & Schuster, said she died of natural causes “surrounded by loving family and friends” in Naples, Florida.

Clark’s page-turners—filled with relatable, often female protagonists—sold more than 100 million copies in the U.S. alone. Her first successful novel, Where Are the Children? (Simon & Schuster, 1975), told the tale of a young mother who changes her identity after she’s accused of killing her son and daughter, only to have her second set of children disappear after she finds a new husband and builds another family. It was the first in a lifelong stream of best sellers—56 in total.

Clark’s own life was itself novel-worthy. The sudden death of her father at age 11 plunged her once-comfortable Bronx family into a precarious financial situation; they lost their house for lack of a few hundred dollars. Then tragedy struck again when her husband suffered a fatal heart attack in 1964, leaving her widowed, at age 37, with five young children. But she continued to try her hand at the suspense stories she’d started writing as a young woman.

Shortly after publishing Where Are the Children?, Clark earned a bachelor’s degree in philosophy at Fordham College at Lincoln Center after five years of night classes. The degree gave her a certain confidence that she had lacked.

“I had always missed the fact that I hadn’t matriculated,” she told FORDHAM magazine in 1989.

“I was hanging up the kids’ diplomas, and kept thinking that it wasn’t the same as having my own diploma in hand. I thought of Fordham. My husband had gone there, and I used to go to tea dances at Rose Hill.”

Overnight Success While at Lincoln Center 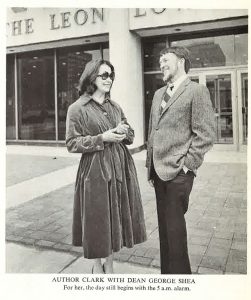 Clark was featured in FORDHAM magazine in 1978, where she joked that before enrolling at Fordham College at Lincoln Center, “I had only a cocktail party accumulation of learning.”

She attended Fordham College at Lincoln Center because of its proximity to her daytime job at a radio station. In 1978, while a student, she received a million-dollar-plus advance for the hardcover and paperback versions of her new suspense novel A Stranger is Watching (Simon & Schuster, 1977). She immediately replaced her old jalopy with a Cadillac—and she finished her degree.

A spring 1978 FORDHAM magazine piece featured Clark and her newfound success: “These days find her literally winging into her classes at Lincoln Center from all points of the U.S., where she is moving in and out of editorial rooms and television studios on interview and talk show tours to promote her latest piece of fiction. She has also moved in with the Beautiful People. Last week People Weekly chronicled her rise to literary fame and fortune in a two-page spread, and also quoted her ecstatic comment about her new apartment facing Central Park. (‘Every Irish-Catholic girl from the Bronx wants to have an apartment on Central Park South.’)” 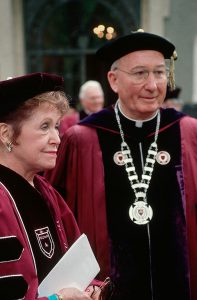 Clark was awarded an honorary degree in 1997 by Fordham President Emeritus Joseph A. O’Hare, S.J.

Clark stayed close to her alma mater throughout her life. From 1990 to 1996, she served as a member of Fordham’s Board of Trustees. As a generous donor, she also became a member of the University’s Archbishop Hughes Society. She was presented with an honorary degree and served as Fordham’s commencement speaker in 1997. (“The plot is what you will do for the rest of your life, and you are the protagonist,’” she said.) She was feted with a Fordham Founder’s Award in 2004, was inducted into the University’s Hall of Honor in 2009, and was honored again in 2018 as a pioneering woman in philanthropy.

“Though she lived a long and rich life, she left us too soon. To speak of Mary is to speak in superlatives: She was, of course, terrifically gifted and hardworking. She was funny, and kind, and generous with her time and talents. Her work touched the lives of millions, and in person she was a force of nature. There will never be another like her. I know the Fordham community joins me in sending her family and loved ones our deepest condolences.”

A Commitment to the Next Generation 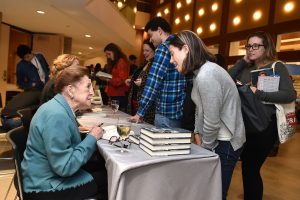 Clark signed copies of her most recent book for students when she attended the lecture given by the holder of her named chair in 2017. Photo by Dana Maxson

Clark’s drive to tell stories was legendary; in her obituary in The New York Times, her daughter and sometimes writing partner Carol Higgins Clark confirmed that Clark was still writing up until very recently.

Her devotion to Fordham was just as strong. In 2013, she pledged $2 million to create the Mary Higgins Clark Chair in Creative Writing. At the time, she said she was adamant that it not be a “literary chair.”

“Frankly, I thought there would be scorn about that because a lot of people would say, ‘She’s just a popular writer,’” she said.

“But I thought, ‘A chair in creative writing?’ Yes, damn it! I’m a good storyteller.” 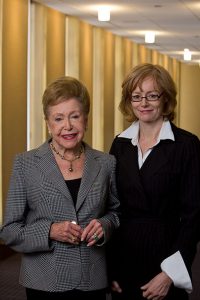 Mary Bly said she considered Clark to be a mentor. “She didn’t realize how kind she was, how giving, and how unusual,” she said. Photo by Bud Glick

Mary Bly, Ph.D., a professor and chair of Fordham’s English Department, hosted Clark in her classes over the years. In a 2012 FORDHAM magazine article, Bly, who publishes under the pen name Eloisa James, wrote that like her, Clark possessed a split personality. How else could one explain how, as a young widow with five small children, Clark could transform feelings of love and protection into best-selling suspense?

Bly wrote that it was no surprise that Clark majored in philosophy at Fordham.

“Clark’s novels do not engage her readers merely as a matter of titillation and fear; hers are studies with high moral purpose, reflective of the importance of her Catholic faith.”

In an email just after Clark’s death, Bly said Clark would likely humbly reject the idea of having been a mentor to her, as they met at most once or twice a year.

“But every single time, she would listen with great interest to what was going on in my publishing life as Eloisa James, and invariably make a suggestion or comment that I would think of again and again. She probably played this role for many, many authors. She didn’t realize how kind she was, how giving, and how unusual,” she said.

“Her financial gift to Fordham when she established the Mary Higgins Clark Chair in Creative Writing, as well as a scholarship for young writers with financial need, will allow her legacy of generosity toward fellow writers to continue. We will deeply miss her.” 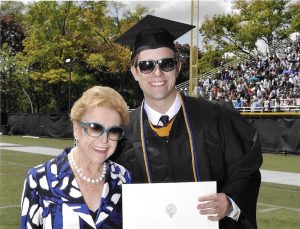 Clark presented her grandson Justin with his diploma when he graduated from the Gabelli School of Business in 2014.

In addition to receiving awards, Clark also bestowed one particularly special one at Fordham, when her grandson Justin Louis Clark graduated from the Gabelli School of Business in 2014.

“My grandmother loved Fordham. I am proud to have worn the maroon and white alongside the person who inspired me to pursue my dream as she did hers. Receiving my diploma from her on Coffey Field is a memory I will cherish forever,” Justin said by email.

“She left Fordham a better school, the world a better place, and me a better person.”

Clark was generous with her time with fellow alumni as well. Lynn Neary, TMC ’71, who recently retired from National Public Radio, covered Clark’s 90th birthday celebration in 2017 and Veronica Dagher, GABELLI ’00, ’05, host of the Wall Street Journal podcast Secrets of Wealthy Women, interviewed her in 2018.

In her story, Neary quoted Clark on readers’ reactions to her stories: “That is the greatest compliment I can get,” Clark said, “when someone will say to me, ‘I read your darn book till 4 in the morning.’ I say, ‘Then you got your money’s worth.’” 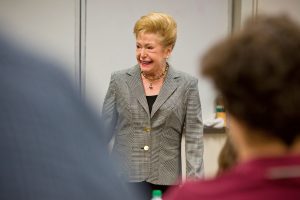 For Susan Wabuda, Ph.D., a professor of history, Clark’s passing brought back memories of meeting her and Clark’s late husband John J. Conheeney, to whom she was married from 1996 to 2018, at a luncheon co-sponsored by Fordham’s Campion Institute.

“It was such an honor to meet Mary Higgins Clark at Fordham events. She was generous, enthusiastic, and an absolute delight. In addition to her suspense stories, her autobiography is riveting. She was a great lady, and the model of a successful writer,” she said.

“She and John enjoyed life, and they thought the world of Fordham.”

John Ryle Kezel, Ph.D., director of the Campion Institute, said Clark had a wonderful sense of humor. He recalled how she once arrived at a banquet for the Flax Trust, which promotes peace between Northern Irish Protestants and Catholics, sporting a cane that appeared to be made of swirled glass.

“When I commented on its uniqueness, Mary said with a glint in her eye that it had been a gift from the late Fred Astaire,” he said.

“As I admired it, Mary began to chuckle, and said ‘Oh John, it’s only plastic and I got it on the internet!’”

Leonard Cassuto, Ph.D., professor of English and American Studies, recalled a quote by another famous author that reminded him of Clark.

“E.B. White famously wrote that it is not often that someone comes along who is a true friend and a good writer,” he said.

“Mary Higgins Clark was both, and her friendship to Fordham is something we’ll always be grateful for.” 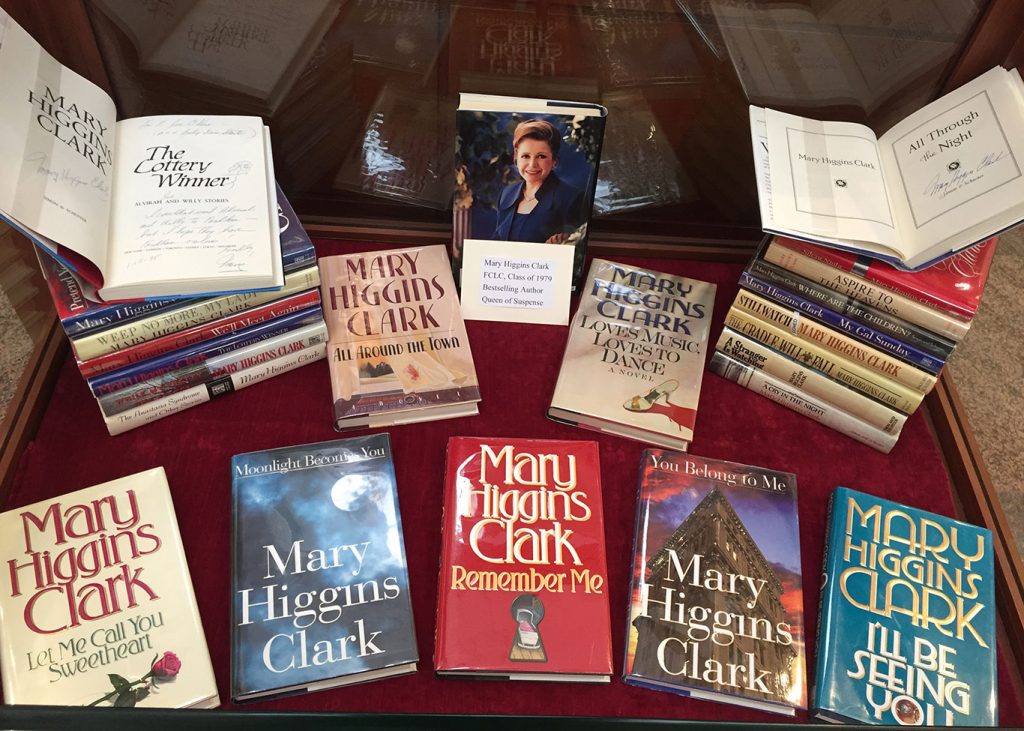 Clark’s books have a prominent home at the Walsh Family Library on the Rose Hill campus. The collection includes a copy of The Lottery Winner inscribed to Father O’Hare.