The gift will make it possible for Fordham to hire a professor of creative writing within the Department of English. The chair will be a visiting appointment for a limited term, offered to a distinguished writer and drawn from a variety of genres. The chair holder will lead writing workshops and teach seminars and master classes to upper-level undergraduates or graduate students.

The first holder of the chair will be announced in the spring of 2015. 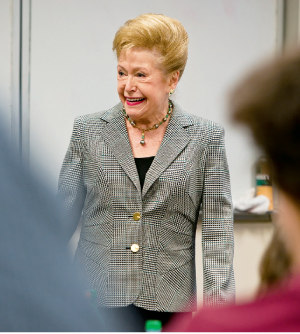 This is not the first gift from Higgins Clark, who served as a University trustee from 1990 to 1996, delivered the University’s commencement address in 1997, and received the Fordham Founder’s Award in 2004. In the late 1990s, she helped fund the construction of the William D. Walsh Family Library.

Higgins Clark said that some years ago there had been a suggestion that she establish a “literary chair.”

“Frankly, I thought there would be scorn about that because a lot of people would say, ‘She’s just a popular writer,’” said Higgins Clark, who said she just signed a deal to write three more novels. “But I thought, ‘A chair in creative writing?’ Yes, damn it! I’m a good storyteller.”

“This wonderful gift from Mary, in an area that is both an academic priority for Fordham and perfectly aligned with her remarkable career as the ‘Queen of Suspense,’ is something we are profoundly grateful for,” said Roger A. Milici, Jr., vice president for development and University relations. “She joins a very elite list of alumni and friends who have made an investment to establish an endowed professorship. We are proud to forever link her name with Fordham, and we are doubly proud to consider her one of our own.”

Higgins Clark grew up in the Bronx not far from the Rose Hill campus, and never dreamed of going to college when she was young because she wanted to help support her Irish-Catholic family. Instead, she attended secretarial school and worked as a stewardess on Pan American Airlines. After raising five children on her own (she was widowed in 1964), she enrolled at Fordham and took classes at night for five years.

“I had two children in law school, one in Mount Holyoke, one in Dartmouth, and one in Immaculate Heart, and I thought, ‘I don’t want to be the only one in the family who doesn’t have a college degree,’” she said.

The idea of a revolving chair was appealing, she said, because creative writing encompasses myriad writing styles that all depend on strong storytelling skills.

“There are plenty of nonfiction writers who are as dry as a bone, and then there are the David McCulloughs and Doris Kearns Goodwins. They know how to tell a story so it reads like a novel,” she said.

Mary Bly, Ph.D., professor of English and herself a bestselling author, who hosted Higgins Clark in her creative writing classes last year, called her a “genius” when it comes to creating narrative drive. Bly said that having a chair that features experts in different writing genres will be a testament to Higgins Clark’s considerable success in not only writing well, but also cultivating a readership.

“It would be wonderful to have a children’s book writer one year, maybe a food writer the next year, a genre fiction writer like Mary the year after that. There’s so much flexibility,” she said.

Robert R. Grimes, S.J., dean of Fordham College at Lincoln Center, called Higgins Clark a “natural-born teacher.” He recalled that her 1997 commencement speech, in which she instructed graduates to think of their lives as their own suspense novels, was one of the best. The intellectual vigor with which she pursued her studies even as she was writing full-time makes her an ideal role model, he said.

“Having this revolving chair where we bring in writers of distinction from different genres means that over the course of four years, students can be exposed to four very different distinguished writers,” Father Grimes said.

Higgins Clark said she has a great affection for Fordham, and is excited by the goal set by Joseph M. McShane, S.J., president of the University, to make it the premier Catholic university in the country.

“I think Fordham has the tightest alumni you could find anywhere. You’re part of the Fordham family, no matter how old you are,” she said. “I have found it to be a wonderful, enriching experience.”