The tips her guests share are practical, often based on their own life experiences. For example, Bethenny Frankel, the reality TV star and founder of the Skinnygirl brand, emphasized the importance of being financially independent and always prepared for the unexpected.

“She went through a very public and difficult divorce, but because she knew what she owned, learned about investing, and kept working, she came through that experience quite well,” Dagher says.

Real estate mogul and Shark Tank investor Barbara Corcoran told listeners to buy only those investments they fully understand. With many complex products out there, it’s important for women to be clear about where they are putting their money. Another guest, comedian Sandra Bernhard, spoke about the importance of living beneath your means and saving.

“She’s been able to do well financially despite the ups and downs that often come with a career in entertainment,” Dagher says. “She never felt the need to keep up with the Joneses or what’s often the very ‘spendy’ Hollywood/NYC celebrity lifestyle.”

A Holistic View of Wealth 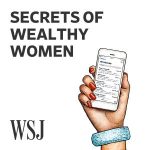 Dagher says the idea for the podcast came to her at a time when more and more women are seeking guidance on how to manage their money.

“There’s an estimated $33 trillion wealth transfer happening in America, and women stand to control a large portion of those assets,” she explains. “Women are inheriting, earning more, and many are generating wealth from their own businesses. They are understanding that they need to take greater ownership of their money and careers.” They generally live longer than their husbands and often assume more control over their finances after a divorce. What’s more, women view wealth differently than men, seeing it more holistically—related to their career, family, and health—and as a way to achieve specific goals, like putting a child through college.

Though most of Dagher’s guests focus on earning and investing, some share stories of personal challenges and triumphs. Bonnie St. John, for example, urged listeners to keep pushing forward when facing life’s difficult obstacles. She spoke from experience: She won silver and bronze medals in the 1984 Winter Paralympics for ski racing despite the fact that her leg was amputated when she was a child.

Meditation expert and author Sharon Salzberg suggested that women take a deeper look at what wealth and happiness really mean. “She led us through a meditation to figure out what we are really striving for,” Dagher says. “She also gave tips on how to come to greater peace with our current financial situations.” 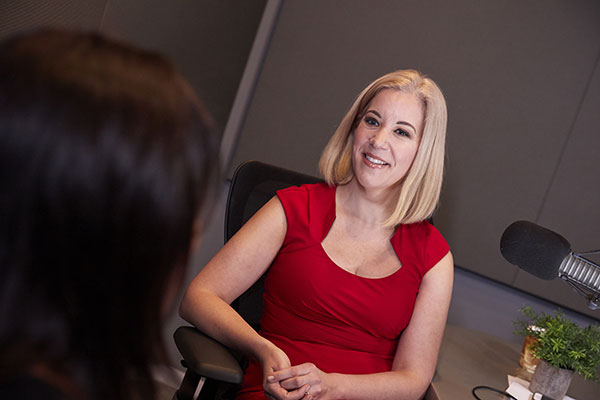 Veronica Dagher in the Wall Street Journal’s podcast studio with a guest.

Dagher says she was honored to host fellow Fordham alumnae Mary Higgins Clark, FCLC ’79, and Liz Ann Sonders, GABELLI ’90, on the podcast, calling them two of the most “down-to-earth women” she’s interviewed. “Mary is 90 and still writing page-turners, and Liz Ann travels extensively to teach people how to be smart investors. The fact that both still have such a strong work ethic inspires me.”

Although she always wanted to be a writer, a career in journalism wasn’t what Dagher envisioned when she started out at Fordham. Instead, she pursued business, inspired by her late father, William T. Dagher LAW ’54, and grandfather who both had their own businesses, and she also earned an M.B.A. at Fordham.

As an undergraduate, Dagher contributed to The Fordham Ram and later freelanced for Ms. Magazine and Newsday while holding down 9-to-5 jobs. But after taking a career class at her church, she decided to follow her heart and transition from business to writing full time. She landed a position as a reporting assistant at The Wall Street Journal after networking with alumnus Scott Stearns, GABELLI ’02, who was an editor there.

Dagher, a Long Island native, credits her alma mater not only for connecting her with great mentors and lifelong friends but also for meeting her husband. She and Patrick Mormino met at the wedding of mutual friends Deanna Rytell, FCRH ’00, and Bryan Connelly, FCRH ’11, and married five years ago.

An Advocate for Women

In her spare time, Dagher enjoys traveling—some favorite destinations include Iceland, Haiti, Israel, and Turkey—and often her travels are service trips organized by churches, such as a trip to Tanzania, where she volunteered with AIDS orphans. Service is important to Dagher, who also volunteers with LifeWay Network, a Queens-based organization that provides safe houses for survivors of sex trafficking. She became interested in the issue after seeing a documentary on it.

“Human trafficking is a several billion-dollar global business, the second fastest-growing criminal enterprise after drugs,” she says. “There are brothels full of trafficking victims right in midtown and in private residences in Brooklyn. I was appalled and felt I needed to do something.” Dagher speaks to various groups to raise awareness about the crisis, and also does special projects, such as visiting New York City hotels, which are hot spots for trafficking, to educate staff members about warning signs and how they can help.

In addition to hosting the podcast, Dagher is a wealth management columnist at wsj.com and frequently appears on Fox Business, Fox News Channel, and nationally syndicated radio to speak about personal finance. In October, she was a panelist a Fordham’s second annual Women’s Philanthropy Summit.

She says there’s a personal connection to the work she does related to women and wealth. Her mother, Monica Dagher, faced a life-changing experience when she was widowed at a very young age.

“She wasn’t financially savvy when it happened and she had to learn at the worst possible time,” Dagher says. “To her credit, she learned about managing investments and made sure I learned, too.”

What secret to success does Dagher wish to share with other women?

“Follow your dreams sooner than later,” she says. “I’ve found that you have a better chance of success if you follow your passions.”