skip to main content
Return to Fordham University
You are at:Home»Education and Social Services»South African Students Return to Fordham for Summer Exchange Program
Photos courtesy of Vusi Maupa, Yuvana Jaichand, and Booi Themeli
For more than a decade, graduate students from the University of Pretoria have studied in a Fordham summer exchange program that teaches them about American corporate life in one of the most iconic cities in the world. The annual experience, which is co-led by Fordham’s International Political Economy and Development program, went virtual for two years during the pandemic. This June, the South African students returned to the Rose Hill campus.

Fifteen students, alumni, and friends of the University of Pretoria lived at the Rose Hill campus for five weeks. In the evening, they took business classes taught by Fordham faculty. During the day, they visited prestigious companies in guided tours led by Fordham alumni who now work at those companies, including Jason Caldwell, GABELLI ’10,’17, GSAS ’11, who serves as a vice president of private wealth management at Goldman Sachs; Darlene Checo-Nuñez, FCRH ’17, an account manager at Bloomberg LP; and Brian Joyce, GABELLI ’98, a managing director at Nasdaq. 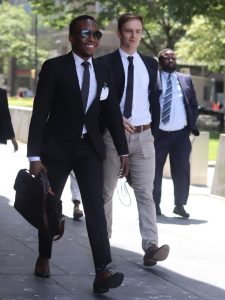 “This program far transcends the traditional classroom pedagogy,” Vusi Maupa, a 33-year-old senior policy analyst at the National Treasury of South Africa, wrote in an email. “We had immeasurable privileges of interacting with senior executives and gained tremendous insight into [their work].”

Maupa, who graduated from the University of Pretoria with his bachelor’s and master’s degrees, said that he participated in the exchange program to learn how to manage financial and economic risks and opportunities in his country and beyond. He said those lessons will help him at his job, where he works in the fiscal policy unit.

“Before the program, I had limited knowledge of strategic financial management and political risk analysis. I am now confident with my understanding and knowledge of these subjects. I will be using the knowledge and skills gained in my professional work,” said Maupa.

Yuvana Jaichand, a 22-year-old graduate student who is studying econometrics, said that the most interesting part of the program was visiting top companies in the business sector.

“It is interesting to see how they manage to maneuver through challenges and how they come up with various creative solutions to market gaps,” she wrote in an email. “It was surprising to see how big firms/companies don’t have it figured out all the time and how they learn as they progress.” 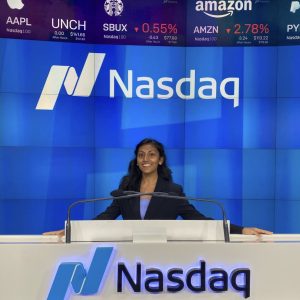 Jaichand, who never visited the U.S. before this summer, said that the program has expanded her perspective on the world.

Besides learning about the American business world, the South African students used their first trip to the United States to explore New York City.

Booi Themeli, Ph.D., director of the exchange program and an associate professor of economics at Fordham, said they were invited to watch the annual Macy’s Fourth of July fireworks show by Gregory Stewart, a deputy inspector for the New York City Police Department.

Shortly before the show began, they met the mayor of New York City, Eric Adams. They also saw The Lion King on Broadway, where original cast member Ron Kunene, a friend of Themeli’s, introduced them to some of the main performers, including the actor who plays Mufasa. In addition, the students visited Boston for a weekend, where they toured Harvard, Massachusetts Institute of Technology, and Boston College.

The South African delegation on Broadway

The Fordham-University of Pretoria student exchange program was launched in 2007 by the Most Reverend Desmond Mpilo Tutu—archbishop emeritus of the Church of the Province of Southern Africa and a 1984 Nobel Peace Prize recipient who was awarded an honorary doctorate from Fordham in 2005—who aimed to empower the next generation of leaders, said Themeli.

During past visits, graduate students from South Africa have taken classes at several Fordham schools, such as the Graduate School of Arts and Sciences and the Graduate School of Social Service, and participated in on-campus festivities like the annual Dagger John Day pie-eating contest. Outside the classroom, the students have met people who run world-famous companies and gained a firsthand look at the American way of doing business. The partnership between Fordham and the University of Pretoria has also expanded to include the Ubuntu program, a semester-long student exchange program for undergraduates. 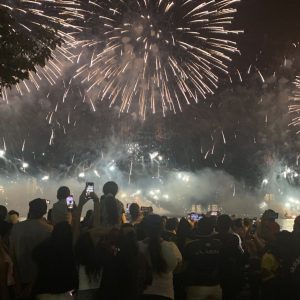 The South African delegation celebrating the Fourth of July

In turn, Fordham graduate students have studied in South Africa, where they engaged with foreign political advisers and policymakers and conducted data analyses with students from across the world. In addition, they attended social events where they met a former South African first lady and CEOs of major banks in South Africa. In August, 12 IPED students will visit the University of Pretoria and take business classes with some of the same students who visited Fordham this summer.

“This program represents one of the focal points of Fordham’s internationalization efforts,” Themeli wrote in an email. “It continues to provide opportunities to South African and Fordham students to study in South Africa and the U.S, thus enabling them to gain an understanding of other cultures that are important in their chosen fields of study. In addition, the program is in line with Fordham’s mission to contribute to economic development and social transformation of South Africa and the rest of the African continent.”