But Ubuntu, a joint program between Fordham, the University of Pretoria, and the Jesuit Institute of South Africa has shrunk that divide over the last six years. Recently, the program has been reimagined and restructured.

“Like all programs, it’s evolved. I have worked closely with our partners in South Africa and with others at Fordham to make sure the experience is an authentic and powerful one for our students,” said Maura Mast, Ph.D., dean of Fordham College at Rose Hill.

“I also want to ensure that the communities with whom we engage have a positive experience.”

Learning By Being With Others

Last spring, the 10 students who lived in South Africa from January to June had their experience shaped by the renewed emphasis on the Ignatian principles that shape Fordham’s mission.

“We want to educate our students for social justice, for well-educated solidarity, for understanding how to be men and women for and with others. You get that by being with others, being in their homes, walking down the dirt roads with them, talking to them, and accompanying them,” Mast said.

“That’s how you develop solidarity, and begin to see God in all people, by first seeing them as humans, in their suffering and their joys.”

In addition to taking classes at the University of Pretoria, Ubuntu students participate in community projects. The emphasis on learning with and from the community is part of the program retooling, as are guided reflections with staff from the Jesuit Institute of South Africa.

“They understand that the program is about them growing up as students at a Jesuit school, and seeing themselves as partners with communities,” he said.

Themeli interviewed each student before their departure, and he said this year’s cohort was phenomenal, in no small measure because two members were humanitarian studies majors, a degree offered in tandem with the Institute of International Humanitarian Affairs. 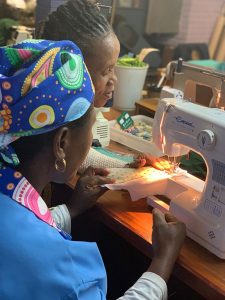 Women from an informal settlement in South Africa producing reusable sanitary pads for a living wage. Photo by Emma Wilhoit

An Intense Focus on Community Projects

Emma Wilhoit, a rising junior at Fordham College at Rose Hill and a native of Shawnee, Kansas, was one of them. She worked with the social and training services organization Kamcare. Her initial goal was to introduce and distribute reusable sanitary pads to women living in an informal settlement (similar to a shantytown) on the outskirts of Pretoria. That evolved into something much better. Soon, instead of buying the sanitary pads, Wilhoit collaborated with the women so that they could design, sew, and sell the pads themselves.

“The women were ready, willing, and able to respond to my project. All I had to bring were the ideas and the resources, and from there they completely took it into their own hands,” she said.

“Now women in the community have employment and are paid a living wage to produce pads, which are given out through the program.”

Joergen Ostensen, a native of Hope, Maine, and fellow rising junior who is majoring in communications, said he considered Ubuntu key to his career.

“In order to be a journalist and someone who’s able to participate in meaningful discourse in the world, I feel like you need to understand the realities that people face in other parts of the world,” he said.

Ostensen tutored a class of third-grade students in reading for his service project. At the end of the year, he gave each of the 25 students a book he’d written that was inspired by the wildlife safari the Ubuntu class had gone on. He said he hoped the book would encourage reading and expand the students’ worlds a little.

“One of the tragedies of Apartheid was that it was illegal for black people to leave the area they were assigned to, so they couldn’t even go on a safari in the country they live in,” he said.

“It’s not illegal anymore, but if you live in a township and make minimum wage, which is like $1.50 an hour, or you’re unemployed, which is 40 percent of the population, it doesn’t really matter. They’re not really allowed to move around, because they don’t have the financial resources.” 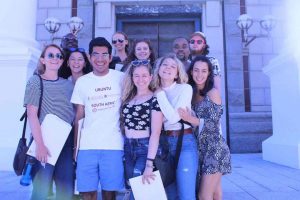 Wilhoit and Ostensen both felt they benefited enormously from the guided reflections in the program, which is offered in association with the Desmond and Leah Tutu Legacy Foundation.

“Poverty in Africa is very different from anything a student might experience in America. We saw it first hand in ways that could be hard to handle and hard to process. Reflection was useful because we were able to unload it and unpack it and realize how to handle it in the future,” Wilhoit said.

“The village where we lived was really nice, so it was quite a jarring sight to go from our service sites back to the village. It really brought up questions, like, ‘Why am I here and they’re there?’”

Ostensen recalled a few instances that he said were difficult. During a workshop, a fellow student was asked in earnest by a local woman what she should do in a situation where she needed to use her body to get a promotion.

“That was a real conversation she had with someone. I mean, what would you do? Together we could figure out what to say, or just cope with the fact that people are living in a world like that,” he said.

Equally as profound, said Wilhoit, was the intense bond the students formed with each other.

“When we were there, we were all living in the same place, going to the same classes, going on the same trips,” she said, noting that the spirit of Ubuntu can be expressed as “I am because we are.”

“Each one of us is who we are because of the way that the group is. I think I’m going to miss them and being constantly surrounded by these people and experiencing the bond in that way.”

Students and administrators from South Africa and the United States celebrated the conclusion of last years’ Ubuntu program in a ceremony at the end of May.

Applications for the spring program are due by October 1.