skip to main content
Return to Fordham University
You are at:Home»Inside Fordham»Former NYPD Commissioner Reflects on Career in Fordham Appearance
Former NYPD Commissioner Ray Kelly (left) was interviewed by William F. Baker, PhD.
The terror attack on the World Trade Center in 1993 “should have been a wake-up call” that something bigger was on the way, said former New York City Police Commissioner Ray Kelly in a talk at Fordham that revealed some of the challenges involved in safeguarding the city.

He stressed the vigilance needed to prevent future attacks, calling cyberterrorism something “we have to be very much concerned about,” and also touched on some of the controversial moments of his 12 years as commissioner under Mayor Michael Bloomberg.

Kelly was interviewed by William F. Baker, PhD—Journalist in Residence and Claudio Aquaviva Chair at Fordham—about many topics featured in his just-published memoir, Vigilance: My Life Serving America and Protecting its Empire City (Hachette Books, 2015). The interview was part of the University’s  Oral Archive on Governance in New York City: The Bloomberg Years.

Kelly served as commissioner from 1992 to 1994 and again from 2002 to 2013, the longest-ever tenure in the job. Discussing the 16 terrorist attacks thwarted on his watch, he said some were stopped by “sheer luck,” like the attempted Times Square bombing in 2010 that fizzled because the would-be bomber, Faisal Shahzad, bought weaker components than he needed.

Citizens still need to be vigilant to help stop attacks, though. 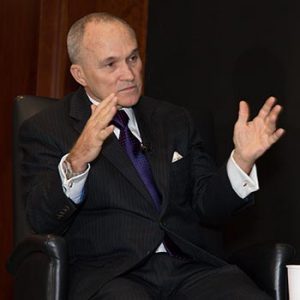 “The further we get away from a terrorist event, the less concerned people are,” he said.

In response to a question about the department’s so-called “stop and frisk” policy, he defended it by noting it’s backed up by common law and the U.S. Supreme Court. Officers in “every state in the union” are authorized to intervene when they see something they reasonably believe indicates a possible crime, he said.

“It is a valuable tool that police officers need to hold onto,” he said, adding that he knows it’s not a panacea or “cure-all.”

Asked about the drop in crime during his tenure and the recent uptick in shootings and homicides, Kelly said, “In my judgment, it’s up because police are hesitating.” He pointed to new oversight measures like an outside monitor mandated by a federal court ruling, which stemmed from a lawsuit alleging racial profiling by police. That and other measures send police “a message to do less,” he said.

He noted the department is “by far the most diverse” in America, with officers born in 106 countries.

When an audience member asked about how to prevent shootings in the city, Kelly described one initiative from 2012 and 2013 that led to the city’s lowest annual number of shootings, murders, and shootings by police ever recorded.

After finding that 30 percent of shootings and murders were originating with loosely organized “crews,” or gangs, the department expanded its anti-gang unit and tracked the signals that crew members were sending on social media, among other measures, leading to 25 major investigations and 450 indictments.

“That proactive approach to these types of gangs, or crews, worked for us,” he said.

He said he supports body cameras for police. In addition to deterring misconduct, he said, “they will show the great work that police do, really throughout the country—heroic work, beneficial work, good work—but also show events that happen, ideally, from start to the end, as opposed to seeing a YouTube video that starts in the middle of something.”