skip to main content
Return to Fordham University
You are at:Home»University News»Campus Center Cross Carved by ‘American Success Story’
Michael Orekunrin, a master stone carver from Nigeria, spent nights and weekends carving the cross that will be the centerpiece of the new campus center at Rose Hill.
At nine feet tall and five feet wide, the stone cross that will be installed atop the new campus center at Rose Hill will be hard to miss.

Less obvious than its expression of Fordham’s Catholic identity, however, is the fact that for one stone carver, it is the ultimate expression of his artistic passions.

“It’s a talent God gave me,” said Michael Orekunrin, who carved the cross from a 2,600-pound block of limestone for the Mount Vernon-based Petrillo Stone Corporation. The recently completed sculpture will be installed in January.

“I’ve always loved anything art. I always wanted to create things that are unique. Even when I was young, I loved to create things, and people told my parents, ‘He’s meant to go to the United States or England to study art because he has this special talent for creativity.’”

From Nigeria to the Bronx

Orekunrin moved to the United States shortly after graduating from Obafemi Awolowo University in his native Nigeria. In 1994, the Petrillo corporation sponsored him for a green card, and seven years later, he became an American citizen. He has since married, had two children, and earned an M.F.A. in sculpture from Lehman College. During his years working as a master carver/cutter for Petrillo, Orekunrin worked on spaces as varied as the N.B.A store on Fifth Avenue, the Brooklyn Tabernacle, Yale University’s library, and the Fulton Street subway station.

“The guy’s an American success story,” said Ralph Petrillo, whose family firm has been tapped to create the campus center cross. The firm also helped build Keating Hall in the 1930s. 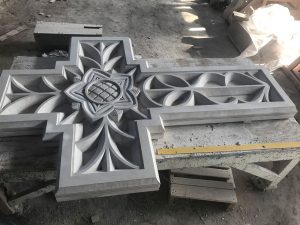 The nine-foot-tall cross is the second one that Orekunrin has carved for the Rose Hill campus.

The cross is not the first piece that Orekunrin has done for Fordham. He carved the cross that was installed at Salice-Conley Hall six years ago, which is echoed in the design of this new cross.

He said he was thrilled to carve another cross for Fordham, as stone carving is more of a passion than a vocation these days. In 2008, looking to branch out a bit, he landed a job as a visual art consultant to the New York Department of Parks and Recreation. In 2013, he trained to become a fraud investigator and now works with the City of New York’s Human Resources Administration.

Every few years though, he gets a call from Petrillo, and he sets aside time on nights and weekends to get to know some Southern Bluff limestone, so-called because it is quarried from the Bedford/Bloomington area of southern Indiana. Famed for its extraordinary hardness, it is the same material used to clad the Empire State Building. Working with it comes naturally to him though.

“It’s almost like writing on paper,” said Orekunrin, who first plied his trade in New York City at the Cathedral of St. John the Divine.

An Expression of Faith

Carving crosses is particularly resonant for him, as he is also a minister at a church just south of the Rose Hill campus. The sculptures are an expression of his faith in Jesus Christ, he said, who “paid the supreme price dying on the cross for my sins so I can have an everlasting life in Heaven.”

The commission has a personal resonance for Petrillo, as well. The work on Keating Hall kept the firm afloat during the Great Depression when his father ran it, he said, and Fordham has relied on Parillo artisans for carvings at Dealy Hall, O’Hare Hall, and the Walsh Family Library at the Rose Hill campus, as well as the Law School building at the Lincoln Center campus.

“It’s not just cutting flat stone, it’s beautiful, carved artwork. There’s the sentimental factor, and there’s the fact that it’s adding beauty to a place that is already a beautiful campus,” he said.

“And it’s going to be there well beyond my years.”