skip to main content
Return to Fordham University
You are at:Home»University News»In New Campus Center, Student-Oriented Spaces Stand Out
On Sept 23, Fordham students were invited to sign the final beam of the frame of an addition to the Rose Hill campus center.
Photo by Chris Taggart
September 30 was a day for the books at the Rose Hill campus.

On that sunny autumn day, a crane lifted into place the final steel beam that forms the frame of the 71,000 square foot, three-story addition in front of the McGinley Center that will be part of Fordham’s new campus center.

It was unlike any of the 499 beams installed before it; before it was hoisted up and welded in place, students were invited to grab a Sharpie and adorn it with their signatures.

It was fitting that students should make their mark, as the student body will be at the heart of the new center. Opening in three phases beginning in September 2021, the center will feature several amenities-filled spaces that will work together to enhance the overall student experience on campus.

A Place to Get in Shape

The addition will be the first section to open. The first floor of that building will feature a state-of-the-art 20,000-square-foot fitness center open to all students, faculty, and staff, while the ground floor will feature a 9,500 square foot student lounge. 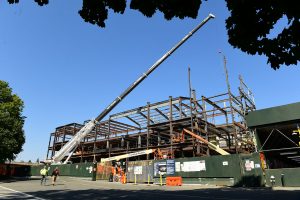 A crane lifted the final piece of the addition’s frame into place on Sept. 30.
Photo by Chris Taggart

The second floor will be home to the offices of campus ministries and community-engaged learning, while the third floor will feature a special events space that can be used for large meetings and events, along with an 80-seat multi-purpose conference room.

After the new building addition is connected to McGinley by a Gallery in the first phase of construction, a second phase will commence by building an Arcade that will connect the Rose Hill Gym, Lombardi and McGinley Center together.

During the third phase of construction, the new fitness center will be connected with the adjacent space in the lower level of the McGinley. That area will be the home of a separate new strength and conditioning center dedicated to Fordham Athletics, which will not be completed until 2023 when the current McGinley center is fully renovated. But until then, athletes can take advantage of the new fitness center that will be open to all.

A Sleek Fitness Facility with Yoga, Spin Classes, and More

At 20,000 square feet, the new fitness center will be double the size of the current space, and a second studio space will accommodate groups interested in activities such as yoga or spin classes. Sleek finishes and exposed ceilings will give the space an urban, minimalist feel and call to mind exercise chains such as Equinox.

A rendering of the fitness center, which will open in the fall.

Ed Kull, interim director of athletics, said that since the expanded fitness area will be open to everyone on campus, “it will benefit the hundreds of students who play in club and intramural sports.” And he looks forward to the next-phase opening of the new varsity strength and conditioning area, which will support and train all 535 students participating in varsity team sports.

“It’s exciting because the varsity center will benefit all varsity female and male programs and athletes, and focus on their physical development, health, and wellness,” he said.

Zachary Davis, a senior history major at Fordham College at Rose Hill and a running back for the football team, thinks both the fitness center and the strengthening and conditioning center will have a big impact on student-athletes. The fitness center, he said, will be a place to get extra workouts in on top of regular practices. And although he will have graduated by the time the strengthening and conditioning area is open, he said the extra space will make a significant difference for future teams. Before the pandemic altered practice schedules, the team had to do its weightlifting in two shifts. 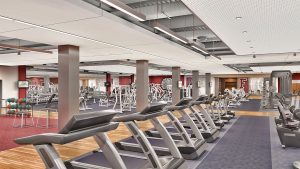 A rendering of the Varsity Training Center

“Instead of having to be broken into different groups, the team will be able to lift and train as one unit, which I think would be revolutionary for the program. It’s always good to be with the guys and have the whole team in one setting,” he said.

“We currently have conditioning outside on the field with the whole group, and that’s always high energy. Guys are just pushing each other, and there’s a whole-team vibe in a way that is second to none.”

A Career Center with Cura Personalis Built In 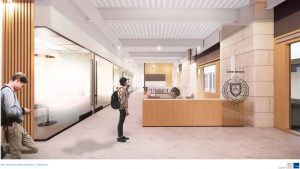 A rendering of the new office of career services

When career services director Annette McLaughlin learned that her office would be getting a new space in the first phase of the campus center expansion, she was well-prepared to make design suggestions. Seven years ago, she started visiting college campuses with her son and daughter; she estimated she’s seen career service centers at 40 campuses since then. The trend, she noticed, was space that was open, airy, light, inviting, welcoming, and educational, and that’s what Fordham is embracing as well.

“We want it to be a destination, not a checklist for students,” she said. “I want to create a career center for cura personalis. This is all about mind, body, and spirit as it relates to how you find your pathway in the world.”

The new center will feature a spacious lounge, McLaughlin said. Everything is being designed to be flexible and adaptable to different uses, from meet and greets to interviews and meetings. Adjoining interview rooms had been designed to accommodate virtual interviews even before the pandemic made them a must.

The design of the lounge is being driven not only by what McLaughlin’s seen at other colleges but also from the needs of corporations that hire Fordham students.

The new career services space will open in fall 2021.

“Employers want to get to know students on a real level. They’re doing a lot more informal kinds of events, so this lounge area will allow for them to collaborate and talk, and it’ll also be a great place for alumni or employers to have casual conversations,” she said.

A Focal Point for Diversity

When big things happen in the world, New Yorkers know where to go to be together, whether it’s Union Square or a plaza in a well-trafficked section of their neighborhood. Juan Carlos-Matos, assistant vice president for student affairs for diversity and inclusion, hopes the new Office for Multicultural Affairs space will provide that kind of safe, affirming focal point on campus—particularly for students who feel marginalized. The space is designed to hold intimate meetings as well as medium-sized gatherings. It’s set to open in the third phase of the campus center redevelopment.

“Just getting people into the habit of knowing that programming is happening in that dedicated space changes the game,” said Matos. “There are many times where things happen in the country and the world, and … being able to just tell people, ‘Hey, we’re having a healing circle because of XYZ tragedy that happened, in this space,’ will make a big difference.”

The addition, which will be open in the fall, will be linked to the existing McGinley Center by an atrium that will be completed in the second phase of construction.
Photo by John Spaccarelli

Christine Ibrahim Puri, a senior majoring in economics and international, political, and economic development who is the founder and president of the Caribbean and African Student Association, said she was very excited at the prospect of a space set aside just for diversity. Even though she’ll graduate before it opens, she plans to come back and visit.

“I would come over from wherever I was in the world, because it’s something I really have faith in, and it’s something that my friends who have already graduated have advocated for,” she said.

Puri came to Fordham from Nigeria and commuted to campus her first year. The transition was not easy, she said, and in fact, three of her Black friends left Fordham that year. A space like this will go a long way toward retaining students of color, she said.

“The Office of Multicultural Affairs was the first place I visited when I arrived and was the place that really got me acclimated. It’s not just a professional thing or an academic thing. While they’re keeping you on track and making you do events and programs, they’re also there for you personally. They’re like your friends, always checking in on you,” she said.

She also said a new, larger, dedicated space will allow for collaborations between cultural groups, and ultimately, more inclusive events.

“It would be so much easier, and I think more students would be open to going,” she said.

A Modern Space for All to Gather 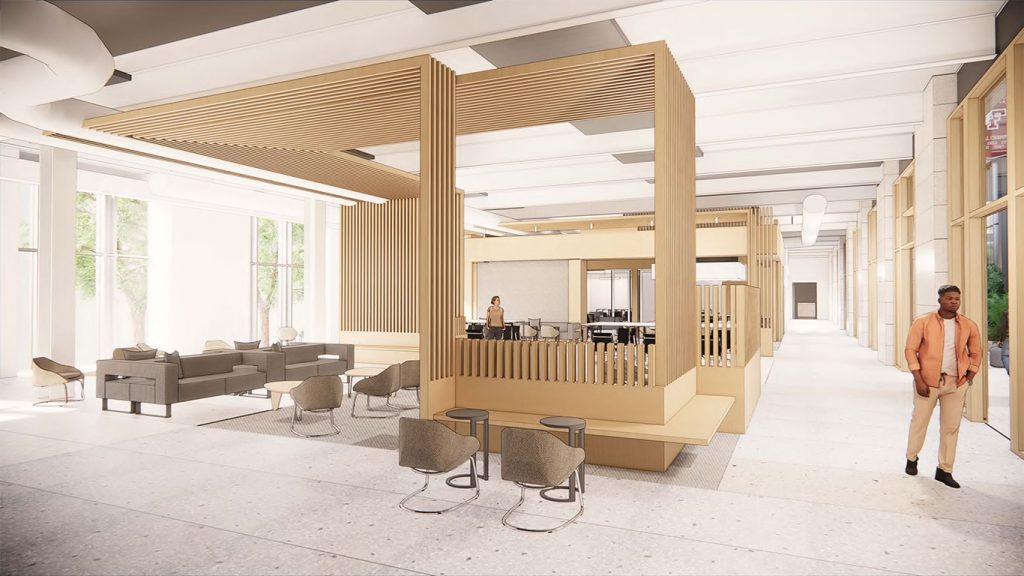 The student lounge, which will be open in the fall.

Larry Peifer, a designer for the HLW architecture firm, said he felt like a kid in a candy store when he was tasked with laying out the new center, because it has everything from office space, to lounge space, to fitness, to dining areas.

Few places best better illustrate how the University is thinking about students in an all-encompassing way than the first floor, which, when complete, will feature the student lounge, the gallery, and the reimagined Marketplace.

The lounge, which at 9,500 square feet will be double the size of the current student lounge, will benefit from its proximity to the gallery, which will have the capacity to accommodate screenings of films and sporting events. It will also be right near the dining area, known as the Marketplace, which will be designed to evoke the vibrancy of a farmer’s market. A new Grab n Go kiosk will be accessible from the Gallery for those who wish to grab snacks or enjoy a freshly brewed coffee. 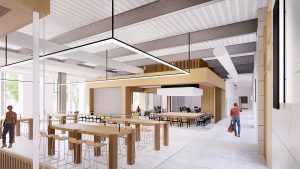 The lounge will have space for active gatherings as well as quiet studying and relaxing.

The lounge will be divided into several “sub-environments”: an area for active socializing featuring a pool table, vending machine, and soft seating; a section with tables that you could saddle up to with your laptop and a cup of coffee, Peifer said, and a quieter, den-like area with a lower ceiling that’s more conducive to reading or studying. Two AV-equipped meeting rooms that can be combined into one larger room will also provide space for collaborating and group study. 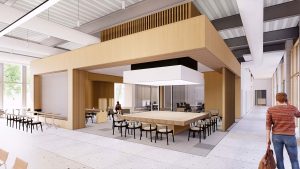 The new lounge will be double the size of the current one.

“I think it’ll be a really transformative project. The University has been really extremely progressive and has pushed the envelope with the design and programmatic strategy of the facility,” he said, noting that he felt it would be a case study for other universities.

“We hope the new student lounge space, and all of the expanded spaces within the new campus center that will be dedicated to our students, will provide much-needed spaces for student gathering, socializing, and programming, all of which will foster student engagement and a sense of community,” he said.

On December 14, Mark Valera, vice president for facilities management, and John Spacarelli, director of special projects and facilities gave a “Behind-the-Beams” tour of the construction of the new Rose Hill Campus Center. Watch below: