skip to main content
Return to Fordham University
You are at:Home»Editor's Picks»At Homecoming 2018, a Reunion Spanning Multiple Generations
Photos by Chris Taggart
The action on Coffey Field didn’t yield a “W” in the score column on Sept. 22, but that didn’t diminish the enthusiasm of more than 5,000 alumni, students, family, and friends who flocked to Fordham’s Rose Hill campus for the annual Homecoming celebration.

Before the faceoff between the Rams and Central Connecticut State University’s Blue Devils got underway, the campus was abuzz with activity. Runners took in views of the campus in the seventh annual 5K Ram Run, while members of the oldest club in the University, the Mimes and Mummers, shared memories in Collins Auditorium. As some families laid out lavish tailgating spreads in the parking lot, others gathered in the big tent for burgers and all the fixings. There was even a walking tour of all things Jesuit-related by former Fordham Law School Assistant Dean Robert J. Reilly, FCRH ’72, LAW ’75. 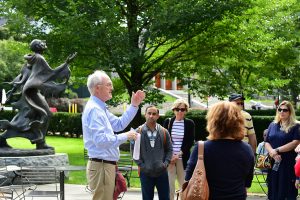 In the parking lot, Fordham College at Rose Hill senior Hayley DeWeese sat surrounded by her extended family and trays of homemade food. The physics major said she loved being there with the large group, including her cousin Emma DeWeese, FCRH ’10. The pair was excited that Emma would be presenting Haylee with her diploma at commencement this May.

“It’s such great family time, especially when our niece decided to come here. Then we knew we could extend our tailgate family weekends,” she said.

This year the family also had some friendly rivalry to contend with. Haley’s dad, Cory DeWeese, brought his nephews, who are students at Central Connecticut State. Their father, Mo Harmon, was decked out in a Fordham hat and a Central t-shirt. “I’m supporting both teams,” he said, smiling. 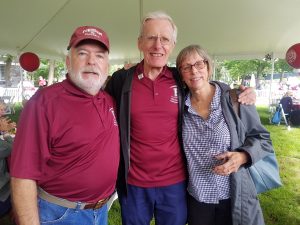 In the loyal donor appreciation tent, Jack McMahon, FCRH ’71, a cornerback for the 1968 national club football championship team, flew in from Okinawa, Japan, for the day. It was the second time he’d made that 24-hour journey. He and 31 other members of the team were welcomed back onto the field during the game for a ceremony honoring their accomplishment.

“We were club football, which meant you played, worked, and practiced because you loved it,” he said, noting that that team consistently outplayed their opponents in the fourth quarter because they put in that extra time and effort.

“Military people understand that when you’re in the service, you’re not fighting for your country and your flag, you’re fighting for the guy next to you. It’s a similar concept,” he said, adding that being back on campus reminded him of that spirit. 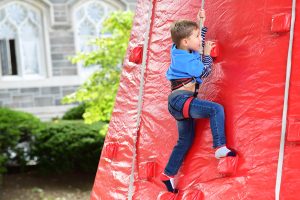 Nearby, Jean Wynn, MC ’80, sported a blue Marymount shirt while chatting with her daughter, Amanda Shea, a junior in the Gabelli School of Business.

Wynn said Fordham was “very welcoming” after it merged with Marymount and eventually sold the college.  She encouraged her fellow Marymount grads to come to Homecoming— “That’s what those big blue balloons are all about,” she said, pointing to the big tent and noting she’d seen about 10 Marymount alumnae so far. The event is even nicer for her now, she said, that her daughter attends Fordham.

“I get to get into all the tents!” she said, laughing. 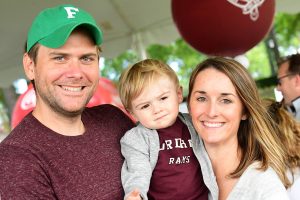 As children scaled an inflatable climbing wall and played cornhole at the foot of Keating Hall, Mike Brady, GABELLI ’06, ’12, and Katelyn Brady, FCRH ’06, took in the scene with their 1-year-old son Jack. The couple met when they were students, but only started dating after graduation. Four years ago, he convinced her to attend a presentation for a summer class he was taking at the time. Little did she know, he was also carrying an engagement ring.

“He had a fake presentation and everything that he was showing me on train. We were walking up the steps into Keating, and he stopped and turned to me, and I was like, ‘Oh my god.’ I was shocked,” she said.

“We love it here. This is our happy place.”

Lessons from the Past 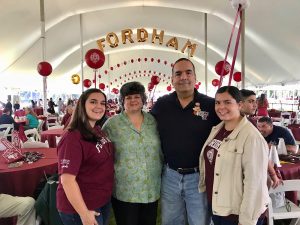 In the main tent, Pascal Storino Jr., GABELLI ’84, was relaxing with his family before heading to section F of Coffey Field, where they hold season tickets. Their connection to the University encompasses three generations—his father Pascal Storino, PHA’59; his wife Thalia Julius-Storino, GABELLI 85, 91; and their daughters Angelica Storino, FCRH’19, and Christina Storino, FCRH’17, GSE’18.

Inspired by the flair of a fellow fan, Storino Jr.was sporting an early-1940s- era pin that was popular with the Fordham football team at the time. Since it was distributed shortly before the program was paused in 1943, the pin depicted a World War I-era tank, instead of a traditional football. An avid fan of history, he noted that his grandfather shoveled coal into furnaces upon his return from World War I. 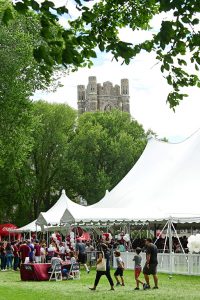 Andrew Bournos, GABELLI ’92, and Danielle Dexter, FCRH ’93, made the pilgrimage from New Fairfield with four of their five children: Cassandra, 14, Gordon, 12, Vivienne, 10 and Brock, 5. They met at homecoming Danielle’s first year, but didn’t reconnect for another three years. They wed at the University Church 20 years ago.

“My uncle told me before I went, ‘What separates the men from the boys is, the boys know how to party, the men know how to party and study. Go be a man.’ I wasn’t the first six months, but it finally hit me, so I got both done,” he said, laughing.

For teenaged Cassandra, the experience of attending has changed since the family first started coming regularly seven years ago; the bouncy castle no longer holds the same appeal. But she still enjoys the day.

“I’ve always loved the face painting and the sketches that they do and climbing the big inflatable wall,” she said. “It’s still a lot of fun.”