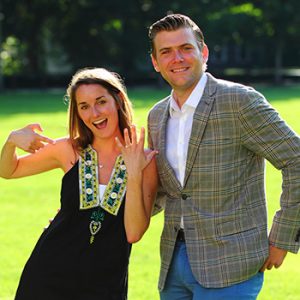 When Mike Brady proposed to Katelyn Scavone in July 2014, he knew the Rose Hill campus was the only place to do it. Photos by Vincent Dusovic

They say timing is everything, especially when it comes to relationships. But for Katelyn Scavone, FCRH ’06, and Mike Brady, GABELLI ’06, ’12, it was as much time as timing.

The two met as Fordham freshmen in fall 2002, when they joined the same circle of friends at Rose Hill. But they didn’t go on their first date until 2007.

“I would have pushed the envelope in college, but I kept getting the Dikembe Mutombo finger wag,” jokes Mike, who was a ball boy for the New York Knicks during Mutombo’s brief stint with the team.

“There was always an unspoken attraction, chemistry, and feeling. It was in the air,” Katelyn says, “but we treaded lightly.”

By 2013, six years after their first date, they were still treading lightly, knowing there was something more between them but not wanting to risk ruining their friendship, choosing instead to focus on work and school.

Mike had earned his MBA at Fordham at night and was attending New York Law School. Katelyn lasered in on her career in communications. One evening, they met for a drink in Manhattan during a snowstorm. Leaving the bar seven hours later, “it felt like three minutes had passed,” Mike says. “I was feeling like it was different.”

They began dating seriously, and a year later, Mike felt the timing was right.

He hired a photographer and came up with a ruse to get Katelyn to Rose Hill. He told her he’d been asked to give a lecture at the Gabelli School (something he’s done from time to time), and he enticed her to join him with the promise of dinner afterward on Arthur Avenue. When they arrived, the photographer was up on a ladder, pretending to photograph Fordham students on Edwards Parade. Mike crossed the Keating Hall steps with Katelyn and, heart racing, got down on one knee and proposed. To the applause of gathering Fordham students, she said yes, and the couple went to celebrate at Trattoria Zero Otto Nove, where their families were already waiting.

When they wed in September 2015, they said their Fordham friends—several dozen in attendance—all expressed the same sentiment: Finally! 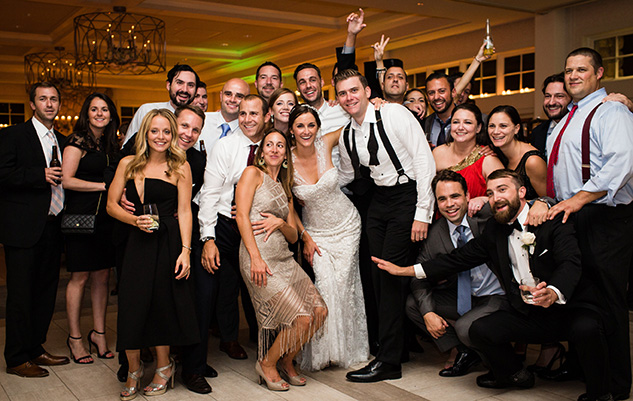 The newlywed Bradys celebrate with their Fordham friends. Photo by Alice + Chris Photography

Nearly 10 years of shared Fordham friends and experiences eventually saved time. “We didn’t have to learn much about each other,” Katelyn says. “We knew each other from our worst days, hanging out at Pugsley’s Pizza.”

The Bradys are looking forward to returning to Fordham this spring to celebrate their 10th reunion during Jubilee weekend, June 3 to 5. While they don’t have any children yet, they would love “to bring our kids to Fordham and say, ‘That’s the White Castle where we ate a lot of burgers,’” Mike jokes.

“The funny thing is, we’re not the typical Fordham couple,” Katelyn says. “But the timing worked out perfectly.”

The Bradys reside in Hoboken, New Jersey. Katelyn is a line producer in the creative services department of Showtime Networks Inc., and Mike is an associate director of licensing for the NBA. He will earn his law degree in a few weeks.