For the second year, humanitarian aid workers and technology experts convened at Fordham to discuss the ways in which Blockchain, the newly developed, incorruptible digital ledger system, can be used to help people suffering from poverty, war, and natural disasters.

The Humanitarian Aid Blockchain Summit, a mix of breakout sessions and presentations that was sponsored by Fordham’s International Institute of Humanitarian Affairs (IIHA), took place at the Lincoln Center campus on Dec. 7.

In an opening address, Giulio Coppi, IIHA humanitarian innovation fellow and digital specialist for the Norwegian Refugee Council, said organizers had learned from the first conference, which was held last November, that Blockchain is a particularly expansive topic, given its newness. Therefore, organizers were determined this year to stay focused on specific, concrete efforts under development.

Thinking Practically on a Large Scale

“For the tech people, listen to what aid actors have to say, because these problems are not something that can be tackled in a pilot or in a small-scale project. We’re talking about enormously complex situations and challenges,” he said.

“At at the same time, try to take this as an opportunity for you to design in a different way, to design for hardship, and not for normal urban life; to design to go global, not to get stuck at the first obstacle once you go to scale.”

He also implored aid workers not to shy away from asking hard questions about the functionality of systems being presented to them. 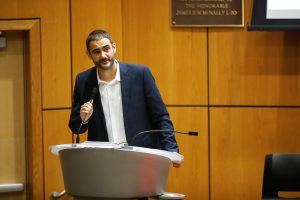 Because Blockchain is an open system that cannot be altered without alerting everyone involved to the changes, one of the most promising areas where it is being applied is the distribution of funds. If money can be securely sent from a donor directly to a person in distress, the logic goes, the possibility of those funds being siphoned away by corrupt middlemen is lessened.

Gurung talked about SIKKA, a blockchain-based digital assets transfer platform designed for financial inclusion that her group has been using to help residents affected by the 7.8 earthquake that hit Nepal in 2015. Stromfelt discussed Building Blocks, a similar system that his organization has started using for digital identity and cash transfers in Pakistan and Jordan.

Proof is in the Small Success Stories

Among the details they discussed was how to convince donors to accept Blockchain data for the purposes of auditing their relief efforts. Stromfelt said small successes have begun to assuage concerns donors may have had. Their first test was with just 100 beneficiaries in Pakistan, and that success enabled them to try a larger pilot in a refugee camp Jordan. A “triangulation database” allows administrators to securely track data from all the entities involved, such as banks and supermarkets.

“The reporting that we’re pushing back up to our donors in Jordan is bar none some of the best. I think right now it’s the best you could possibly get, to the point where we’re accessing funds that we would not have accessed previously from very, very large donors,” he said.

Designing with the Culture in Mind

Design was a large part of the discussion as well. Gurung noted that SIKKA was designed to work via text messages, and there are no plans to design anything more complex, such as a smart phone app. In Nepal, flip phones outnumber smartphones, and text messages are a widely understood and accepted form of communication.

“There’s so much we can do in terms of what the technology can do, but then we always have to remember what is our core mandate to the country that we’re in,” she said. 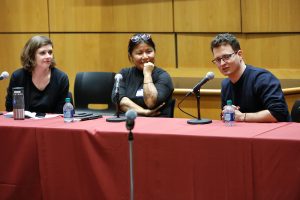 The complexity of Blockchain may be the biggest impediment to getting large organizations to accept systems like SIKKA, she said.

“Messaging is so complicated. We use so many terms that sometimes even I get lost and have to go back to my team and be like, what does that mean again, what does that token do?” she said.

Kamea Aloha Jr., aka CrytoCoinKid, exemplifies how one can best explain it, she said. Aloha Jr., an eight-year-old Youtube vlogger from Hawaii who covers subjects such as cryptocurrency and coding, makes complex subjects easy to understand.

“If you can explain what you’re trying to do to a 6-year-old kid, you’re on the right path.”

In a closing speech, Ambassador Toshiya Hoshino, Ph.D., Permanent Mission of Japan to the United Nations, said he was optimistic that attendees will help the UN achieve its sustainable development goals, which were adopted in 2015. He said there is a widespread acknowledgment that today’s problems can’t just be solved by governments alone.

“The United Nations is different from the United Nations 10 years ago. This is a place where all are invited to discuss issues with business representatives, academics, scientists, innovators, and to use our ideas and strengths to make a better world possible,” he said.

Humanity has entered “Society 5.0,” having passed through the first four variations of hunter, agrarian, industrial, and information society, he said. Science and technology, including Blockchain, will be the centerpiece of the next phase.

“There are issues of scalability, including the enormous amount of energy it consumes, and longer response times for verification when more users incur transactions,” he said. “But Blockchain has great potential for its resilience, high security, and immutability.”