skip to main content
Return to Fordham University
You are at:Home»Inside Fordham»Conference Explores Potential of Blockchain in Humanitarian Aid
Michael Casey, Dante Disparte, Grace Torrellas, and Andrew Kruczkiewicz discuss the ways that blockchain technology might help humanitarian organizations.
In the world of humanitarian aid, one of the biggest challenges to getting food, water, and shelter to the needy in a timely manner is corruption, which siphons aid away from those who need it most.

Blockchain, a newly developed, incorruptible digital ledger system, has the potential to solve this problem, said researchers and experts at a daylong conference on Nov. 10. at Fordham’s Lincoln Center campus.

“We all know that global complex emergencies today are riddled with immense challenges. More people than ever, since World War II, are affected by natural and manmade disasters,” said Brendan Cahill, director of Fordham’s Institute of International Humanitarian Affairs (IIHA).

“Blockchain can have a role not only serving people who are endangered by these crises, in refugee camps or in disaster response, but also in finding new ways that allow for people to be more self-reliant and that ensure the success of long-term humanitarian projects.”

A Technology Resistant to Data Tampering

The conference brought together representatives from intergovernmental and nongovernmental agencies to share the ways they’re taking advantage of the technology, which has made possible the use of the digital currency, bitcoin. Blockchain is a chainlike technology, used for things such as ledgers, that is resistant by design to the modification of the data.

Nick Petford, Ph.D. vice chancellor at Northampton University, detailed how the security afforded by blockchain technology could make possible what he called a “Distributed Learning Ledger.” Such a tool could better capture a person’s nontraditional education experience, including work with families and friends, religious values, and life changing experiences. 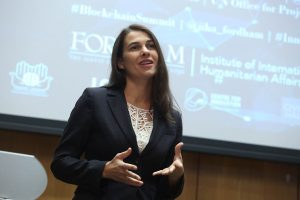 Mariana Dahan expressed hope that blockchain could be used to thwart human trafficking.

Mariana Dahan, CEO of World Identity Network, said that there are two billion people globally who have no proof of who they are, with many living their entire lives with no verifiable ID. In her native Moldova, Dahan said there is hope that blockchain could be used to thwart human trafficking of children.

“If we had an electronic ledger that would record any attempt of getting a minor or an undocumented child out of the country without the consent of the parent, we would be able to secure this information and then act upon it,” she said.

In the panel, Transparency Dividend: Can Blockchains Stretch the Humanitarian Dollar Further?, Dante Disparte, CEO of Risk Cooperative, said that just as the internet introduced the world to low-friction (easier) communication, blockchain technology has made transferring of funds easier and safer. That could be useful for helping individuals who might need to evacuate an area to escape a powerful hurricane, but who don’t [readily]  have the funds to do so.

“When you introduce blockchain, you can start asking some really interesting ‘What if questions?’ What if we could provide every person who was in an evacuation zone in harm’s way, or in the line of sight of a natural disaster, a $5,000 evacuation dividend?” he said. “Every holder of a homeowner’s policy ought to have that kind of evacuation dividend. With blockchain it’s easy to geo-reference, … to get that third-party validation that we need in the insurance industry.”

Andrew Kruczkiewicz, science adviser at the Red Cross Red Crescent Climate Centre, said blockchain would help the Red Cross be more proactive in predicting where donors’ funds might be better directed. His organization is pursuing “impact-based forecasting” that assesses the potential impact, not just the hazard, of natural disasters. For instance, a storm might affect the entire state of New Jersey, but some areas of the state will inevitably suffer more because of sociological differences.

“If the Red Cross understands that funding is going to be a problem in a particular country or region, perhaps there are donors that are interested in trying to build resilience in that region or that country, or would like to decrease the potential impact of floods,” he said.

“Blockchain can help us to speed things up, make things faster, and add to the transparency side of monitoring and evaluation.”