skip to main content
Return to Fordham University
You are at:Home»Inside Fordham»Within Hughes Hall, an Intricate Choreography of Construction

Standing at the heart of the Rose Hill campus, Hughes Hall has undergone many changes in its 120-year existence. 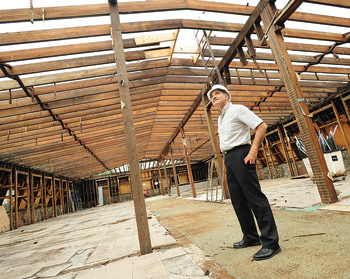 Once the home of Fordham Prep, it has spent time as an athletic facility, administrative offices and, most recently, a residence hall.

Today, construction crews are transforming the 50,000-square-foot structure once again—this time, into a building within a building.

When Hughes Hall reopens next year as the new home for the Gabelli School of Business, nothing will remain of the original structure except the façade—not the floors, the interior walls, or the roof.

It’s the most dramatic change ever for Hughes, which was built in 1891 for $85,000. The structure predates modern building techniques. So to create an open floor plan worthy of the advanced business education offered by the Gabelli School, the campus landmark is losing its load-bearing wooden supports and receiving a skeleton of steel.

After the roof was removed, holes were cut in a straight line through each floor. Next, steel columns were penciled through the floor holes and steel beams inserted through the windows. Then crews bolted the columns and beams to each other and to the foundation. After that, cables were strung to hold everything together, and a “wailer” was installed to bolt the steel interior to the stone walls.

“This is what will support the building structure while we remove the infrastructure,” said John Spaccarelli, director of special projects for facilities management. “Those are the three major challenges—the foundation, the steel and the removal of the infrastructure.

Only after new floor decks are installed can a glass mansard roof begin to take shape atop the building. Here, too, the replacement will be a replica of the original, but with a modern twist. It will rise 12 feet higher than the previous roof to shield new mechanical equipment
from view. 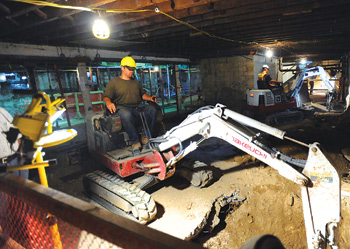 On a scale of one to 10, Spaccarelli ranked the complexity of this project as an eight, in part because Hughes Hall is in the middle of the campus, making the logistics of transporting materials more difficult.

The new structure will be finished on time as long as everyone—from the contractors at Tishman Construction to the 30 subcontractors to the architect—are in perfect synchronization, he said.

“What’ll make this project go is the architect and the contractor working hand-in-hand without delay,” Spaccarelli said. “My job is to keep the harmony and keep the team focused on the outcome.”

Creating a building with a 19th-century exterior and 21st-century interior symbolizes the Gabelli School’s respect for the past and dedication to the future, said Donna Rapaccioli, Ph.D., dean of the school.

The open floor plan made possible by the new construction also lends itself to the school’s mission, she added.

“We’re all about discovering natural connections and integrating disciplines,” she said. “From our perspective, the best way to learn is to interact, and an open floor plan helps to facilitate that kind of collaboration. So we’re creating a building with a lot of glass, a lot of open space.”

In addition to a feeling of openness, each of the school’s four areas of focus— academic excellence; globalization; students’ professional and personal development; and pedagogical excellence and innovation—have distinct areas within the building.

“We’re creating a community of academics and people who want to learn and to talk about what they’re learning,” she said.

Though it’s a complex process, the reconstruction is less expensive thanit would have been to demolish Hughes and replace it, said Marco Valera, vice president for facilities management.

“Plus, we’re retaining the existing façade, which—as you can imagine—is of importance to the University,” Valera said.

Because Hughes is designed to LEED Certified guidelines, it will have plenty of features that increase its efficiency.

“LED lighting technology is going to be a great benefit overall, not just in terms of maintenance and energy costs, but sustainability,” Valera said.

He also noted that the main air conditioning unit will be more efficient because it will be tied into the University’s gas-fired boiler plant, which will allow it to be powered by steam, not electricity.

The move will be significant for the Gabelli School as it brings together faculty members and students who are scattered at various locations around campus, and because of its central location.

“It’s very significant that we’re on the perimeter of Edwards Parade. It speaks to the importance of the business school within the University community,” Rapaccioli said.

“It will allow us to create a real academic learning community, where the faculty and the students will be in the same space for extended periods of time outside of the classroom.”