skip to main content
Return to Fordham University
You are at:Home»Faculty Profiles»Reinventing the Internet: One Professor’s Efforts for Better Performance and Security Online

As the Internet has grown up, it has grown trickier, posing all sorts of tough questions for computer scientists. 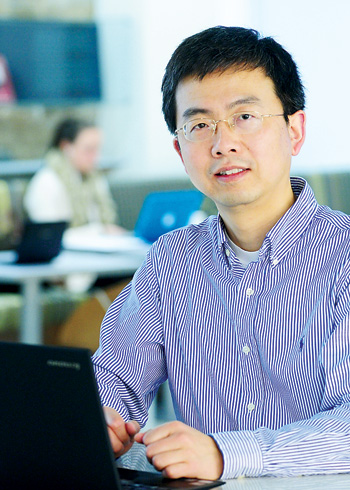 Among them: How will Internet service providers manage the ever-greater swarms of data zipping around cyberspace and prevent “traffic jams” that disrupt service? Also, how can computer users ensure that their messages don’t reach the wrong people after they click “send” or “post”?

These are just two of the questions being examined by Honggang Zhang, Ph.D., an associate professor in the Department of Computer and Information Science, who has a knack for showing the links between various Internet-related issues. He’s broadly interested in examining all types of computer networks that have sprouted online, and wants to see how they can be made more efficient, more reliable, and—especially in the case of online social networks—safer for those who want to keep personal information private.

That’s his current research focus, one made all the more relevant by the surging popularity of social media. “It seems almost everybody has some sort of online social network account, and that has a huge impact on people’s daily life,” Zhang said. “So understanding the system from a computer science perspective is very important.”

He noted some of the obvious safety concerns: The wrong people could gain access to a Facebook posting announcing “I’m on vacation next week,” for instance, or intercept a child’s message telling a parent exactly where he is. Then there are those privacy issues raised by social networks that centrally store their members’ information.

“A single entity, a single company, owns all of your data,” Zhang said. “They look at what you have been talking about, what you have been looking at online, then they try to profile you. In some sense, they know you better than you know yourself.”

One alternative, he said, is a decentralized social network, in which members can control the circulation of their information through cyberspace by storing it on their individual computers and choosing which other computers to release it to. In fact, such a system exists—Diaspora, a social network begun by New York University students in 2010 to allow its members to maintain “data ownership,” he said.

In fact, the desire to connect with others generally seemed to trump the desire to “own” one’s data. The study of 216,000 Diaspora users found that 70 percent were clustered together on one server. Four servers accounted for 94 percent of all the network’s members. These servers were also attractive because they were more likely to be operating at any given time.
Encryption holds out other possibilities for greater security in social networks, but it has its limitations in a medium designed to foster the sharing of information, Zhang said. For instance, encrypted personal information can’t be found by potential online friends, and one’s postings and messages can only remain as secure as one’s friends are willing to keep them, Zhang noted.

Social media is at the heart of another one of his research projects. This one involves peer-to-peer networks, or networks of “peer” computer users that circulate files among themselves—in a process called data swarming—rather than download the files from the server where they originated.

Because data swarming and social networking are the two most popular activities on the Internet, he asks, why not combine them? An overlay of the two could create a richer social media experience while also making for smoother, more efficient data swarming, his research has found.

He’s also researching mobile devices, such as smartphones and tablets, to find out how they might work more efficiently together to reduce power consumption.

“If we are in the same building, and we were getting the same data from the same server, maybe it’s a good idea that I gather my data and then I forward my data to your smartphone—through Wi-Fi, maybe, or Bluetooth,” to conserve power, he said.

He envisions a sort of peer-to-peer system for smartphones: “Suppose there are 100 smartphones in this area. They all have Bluetooth connections, Wi-Fi connections. Maybe [their users are all]watching some football game, or something. Maybe you can somehow manage all those connections to save energy.”

In the long term, Zhang wants to produce designs and algorithms that fundamentally improve the architecture of the Internet and help it meet its users’ growing demands.

He loves the fast pace of change in computer networking, as well as the ability to quickly gauge the effect of new programs or technologies.

“If you have very good applications, you can immediately see their impact,” he said.