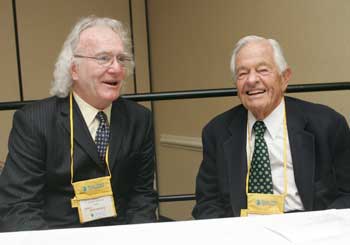 The institution of the family, critical to the development of children, is under enormous stress because American society cares more about business than raising its young, a leading authority on pediatrics and child development told a conference of specialists.

“We are the least child and family oriented society in the world,” Brazelton told an audience of several hundred attendees at the New York Hilton. “Every bit of research that we have shows us that family rituals are critical. If we don’t include the family in our outreach and intervention, whatever we do [for the child]is short-lived.”

Brazelton, who has researched societal effects on developing children all over the world, founded the Touchpoints Children’s Hospital in Boston in 1993 to help reshape the concept of “child care” into “family care.” Lack of day care for working parents, poor or no medical care, immigration woes and race and class discrimination can be passed on quickly to young children, he said.

“It’s a very tenuous thing we’ve set up,” he said.

Brazelton underlined the importance of environment in child development by citing two cultural examples: In Kenya, he said, babies walk by seven months of age because they are bounced and pulled to their feet by all people in the village, and are encouraged from a young age to stand. In Asian and Mexican cultures, Brazelton said, babies are exposed to quiet speech and low-key movement, which facilitate a high degree of auditory and visual capacity. The result, he said, is that the ability in such children to concentrate is much higher than in western babies.

Outlining a paradigm shift called the “touchpoints” model, Brazelton told the audience of education professionals that they must emphasize something positive about every child they treat and must collaborate with parents to empower them in their own child’s cognitive and emotional development.

“If we want them to succeed, we have to be part of their family system,” he said. “We have to speak their language, believe in their culture, understand their religion and let them know we are there with them.”

GSE began its Early Childhood Conference in 2003 with 15 registrants; this year’s event, co-sponsored by Los Niños Services, drew a record 1,000 people and 50 exhibitors. James Hennessy, Ph.D., dean of GSE, said the school sponsors the conference as a way to help close the achievement gap between vulnerable children and those who are more fortunate.

“Closing that gap is not going to occur if all we do is apply remedial services,” Hennessy said. “Prevention is more important. What you [professionals]are doing with young children is developing programs that will prevent the occurrence of problems.”