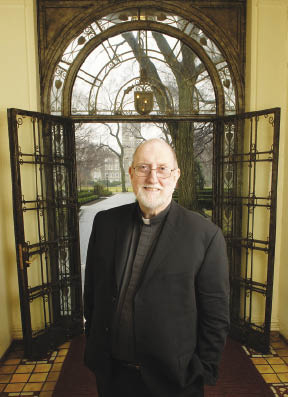 Patrick Ryan, S.J., has held the Laurence J. McGinley Chair in Religion and Society since 2008.
Photo by Chris Taggart

The fall McGinley Lecture examined a complicated theological matter from a point of view to which anyone can relate—food.

Father Ryan said that while Islamic and Jewish traditions hold a favorable perspective on the law and those who study it, Christians tend to have a prejudice against religious law that spills into civil life.

“We tell more jokes about lawyers than we do, for instance, about butchers, bakers and candlestick makers,” he said.

Father Ryan spoke about the Christian reversal of Jewish food prohibitions outlined in the New Testament, including Peter’s dream in the Book of Acts, in which all food was declared acceptable to eat.

Though Christians are thought of as not having food prohibitions, modern Christian movements have included Catholic prohibitions on meat during Lent and America’s alcohol prohibition in the 1920s.

Father Ryan suggested that the failure of Prohibition demonstrates that law alone is not enough to maintain strict abstentions.

“It is only love for God and one’s community that can motivate any variety of food prohibition or any type of total abstinence,” he said during the Nov. 9 lecture.

Setzer said that food and beliefs about it are a powerful representation of a person’s religious and personal identity.

“How we deal with [food], talk about it, prepare it, restrict it, or refuse it to others reveals our deepest values,” she said.

For example, Setzer said gratitude for food is a strong Jewish value, bearing a stark contrast to the fear-based approach to calories in our modern diet-conscious society.

Father Ryan said the law and its study are highly esteemed in Islam, which established itself as a “civilization of love based on law.”

“Jurisprudence has been at the center of Muslim intellectuality ever since [its early days]—not theology,” Father Ryan said.

Though its focus on the law is perhaps better known, Hussain said that a close study of the Koran reveals it as a “book of love.”

“It will surprise most non-Muslims, and unfortunately some Muslims, that Islam has a strong emphasis on love,” Hussain said. “How many of us, Muslim or not, think about love as the first word that comes to mind when the Koran is mentioned?”

Food prohibitions have a distinct place at the intersection of law and love, and can play a role in greater understanding among the three religions, Father Ryan said.