In the field of social work, the master’s of social work (M.S.W.) is the terminal degree necessary to be licensed and to practice. 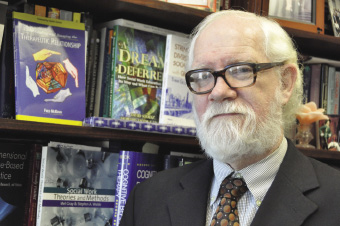 Meredith Hanson, D.S.W., is sought-after internationally for his expertise in evidence-based practice.
Photo by Janet Sassi

Some years ago, people interested in advanced clinical degrees went for a doctorate in social work (D.S.W.).

But in the last two decades—as the number of social work schools has increased around the country—a new track is flourishing: the social work doctorate of philosophy (Ph.D.).

At the Graduate School of Social Service (GSS), some would say the social work Ph.D. program is synonymous with Meredith Hanson, D.S.W., professor of social work and the program’s director. Since Hanson landed at Fordham some 15 years ago, he and his faculty colleagues have created the selective program, which currently enrolls 79 students and graduates five to six students each year.

Over the years, Hanson and his colleagues have designed and built the Ph.D. curriculum, which focuses on doing qualitative and quantitative research on social work practices and policies, from a social justice and human rights perspective.

“Social work is one of the growth areas in academia right now, in contrast to some humanities,” said Hanson, co-editor of Strength and Diversity in Social Work with Groups: Think Groups (Routledge, 2009). “We have more openings each year for social work faculty than we have Ph.D. graduates across the country.

“A Ph.D. graduate will end up as a researcher and scholar, not a practitioner. Our grads have taken a number of positions nationally. About half of them go into academia; the rest go into places like governmental organizations, institutes and foundations.”

Recently, Hanson has helped to design an additional “practice” specialization for the program. Now all Ph.D. candidates are required to complete a teaching practicum, which means they may teach a class in Fordham’s M.S.W. program.

“It is important that our graduates are prepared to teach practice as well as policy,” he said.

The result, he said, is that Fordham’s doctoral graduates enjoy a reputation not just for being scholars, but for being good teachers as well, which makes them competitive in the growing marketplace.

Bronwyn Cross-Denny is a scholar who has benefited from the GSS doctoral program. The Ph.D. candidate was hired a year ago as an instructor in social work at Sacred Heart University. She said she has only to finish her dissertation and she can move into a tenure-track associate professorship.

“I still consider myself a social worker first, and would never entirely give up private practice,” Cross-Denny said, “but now I can research and teach, too.”

Hanson also has combined a career of practice and teaching. His research interest is in addictions, a field he worked in for more than three decades as a practitioner, program developer and consultant. Recently he received a Gero Innovations Grant to develop curricular materials on older adults and substance abuse in collaboration with Fordham’s Ravazzin Center on Aging.

The materials, he said, have been applied with great results at Fordham.

“Substance abuse in older adults has been ignored over the years, but now that we have so many older adults, we are paying attention to it,” he said.

Hanson’s expertise in teaching evidence-based practice has made him sought-after internationally.

From 1998 to 2002, he and fellow faculty member Robert Chazin, D.S.W., made several trips to Ukraine as consultants on the Chernobyl Childhood Illness Program, funded by USAID. Their job was to teach such less-prescriptive practices to Russian practitioners.

“Some of the most robust findings in psychotherapy research show that the quality of the clinician-client relationship, as perceived by the client, is a major predictor of success,” he said. “If clients perceive your work with them as very positive, you are going to have a bigger impact. And part of being perceived as positive is being collaborative—engaging a person around their struggles and their issues, and drawing from them their own resources to resolve their problems.”

But after years of social work practice, consultation and community service in which he’d pretty much “done everything I wanted to do in the field,” he took a faculty position at Columbia University and came to love teaching.

“That’s what attracted me to Fordham,” he said. “There is incredible value placed on teaching here. Some of the best satisfaction I have gotten has been seeing my master’s and doctoral students learn something, go into the field and apply it.”