skip to main content
Return to Fordham University
You are at:Home»Fordham Magazine»On a Brooklyn Street Corner, a Life Honored and Remembered
Ella Woodriffe and her children, Edwin and Lee Woodriffe, are shown below the newly installed street sign commemorating their father. All photos by Marisol Diaz-Gordon
Editor’s note: This story was updated for publication in the spring/summer 2019 print edition of FORDHAM. Read that article here.

Fifty years after the untimely death of Edwin R. Woodriffe, his memory brought dozens of people to the corner of Brooklyn where he grew up. They came to commemorate the earnest, witty FBI agent and Fordham graduate whose character still resonates—and whose name now adorns a street sign outside St. Peter Claver Church, a formative place from his childhood.

“It’s an extraordinary thing when you can see a dream come to fruition,” said Woodriffe’s daughter, Lee Woodriffe, who spearheaded the effort to have the street co-named. “You need a lot of patience, understanding, tenacity, a dose of good humor to see it through,” along with a sense of honor and purpose, she said. 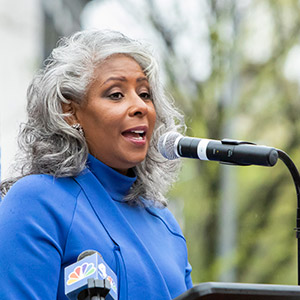 Woodriffe, GABELLI ’62, was a son of immigrants from Trinidad who grew up in Bedford-Stuyvesant and worked his way through Fordham’s City Hall Division at 302 Broadway, earning a degree in accounting.

He was not quite 28 years old when he was shot and killed by a bank robber in Washington, D.C., on January 8, 1969, becoming the first black FBI agent to die in the line of duty. (See related story.) At the time, Lee Woodriffe said, he was one of only a handful of black agents who had succeeded in joining the bureau.

Woodriffe’s widow, Ella Woodriffe, also spoke at the ceremony. “There’s a saying that hatred corrodes the vessel it’s carried in, but today I have no hatred,” she said. “I speak with heart-filled joy and thanking God for allowing all of us to be here in attendance as a testament to my husband’s memory.

“His story began right here at St. Peter Claver Church,” she said. “Edwin went to school here. He went to church here. He was an altar boy here. We met as teenagers here, attending Christian confraternity classes. We were married here, we had two children, and lastly, he was funeralized here.”

“He was gone from our lives too soon,” she said. “But he will be forever remembered in our hearts. His legacy will live on through his children, and now through the co-naming of this street.”

Woodriffe’s son, Edwin R. Woodriffe Jr., was 6 when his father died, and said he lacks vivid memories of him. 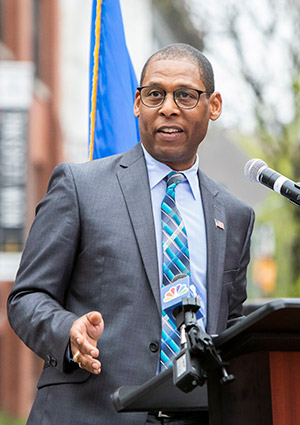 “There are photos and stories from friends and family, but the nuances are lost,” he said at the ceremony. “What was his favorite color? I don’t know. I have one of his high school essays on basketball. Were the Knicks his favorite team? I don’t know, and if I did, I don’t remember.

“The thing I remember most is the idea of him represented inside the family,” said Woodriffe, whose mother got help from extended family in raising him and Lee. “I feel blessed that my father’s sacrifice was a part of inspiring my sister and I to be the adults that we are today. And on the 50th anniversary of his passing, I’m honored to see his name on this corner, where his story can continue to be a positive one.”

Other speakers at the ceremony included Bishop James Massa of the Diocese of Brooklyn.

“May all who walk or drive on this street glance from time to time at the sign with the name of Edwin R. Woodriffe,” he said, “and know that a great New Yorker once lived among us and overcame racial barriers in order to serve, in order to protect the vulnerable and contribute to the common good of our nation.”