skip to main content
Return to Fordham University
You are at:Home»Fordham Magazine»Features»Legends, Lore, and Traditions

In fall 1874, Fordham adopted maroon, a color then used by no other college. Stephen Wall, a member of the Class of 1875, has received credit for making the suggestion. Years later, he wrote: “I was asked what maroon was, and the only way I could explain it was that it looked something like claret wine with the sun shining through it.”

122. The Fordham Ram Was Born from a Cheer 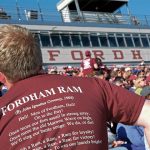 During a football game against the United States Military Academy at West Point in 1893, students came up with a cheer: “One dam, two dam, three dam, Fordham!” It was an immediate hit, but Jesuit faculty members frowned on the slightly vulgar chant, saying such behavior was unbecoming of Fordham gentlemen. Students quickly substituted “ram” for the offending word, and suddenly Fordham had a mascot.

In his dorm room in Dealy Hall, Boston native John Ignatius Coveney, Class of 1906, wrote the words and music to the “Fordham ‘Ram’ March & Two-Step”—better known simply as “The Ram.” The Fordham fight song made its New York debut not at the Polo Grounds or at Rose Hill but at the Carnegie Lyceum, a recital space in Carnegie Hall, on May 1, 1905. Though Coveney’s music career was brief (he died in 1911 at age 26), he gave his alma mater a lasting dose of school spirit.

124. A Family of Hawks Made Their Home at Rose Hill 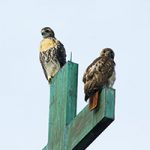 Ten years ago, a pair of red-tailed hawks made the pediment of Collins Auditorium their home and proceeded to expand their family. The hawks, nicknamed Hawkeye and Rose, had three eyasses, or nestling hawks, in 2006 and three more in 2007.

Public schoolteacher Virginia O’Hanlon Douglas graduated from Fordham in 1930, completing her doctoral dissertation on “The Importance of Play.” But she’ll always be best known to history as the 8-year-old girl who in 1897 wrote to the editor of the New York Sun: “Please tell me the truth, is there a Santa Claus?”

127. A Fordham Jesuit Helped Bring Jujubes to the World

Before joining the Fordham faculty, Hermann Blumensaat, S.J., was in the candy business with his friend, Henry Heide. They have been credited with inventing Jujubes and Gummi Bears in the late 19th century. Blumensaat left the candy company, however, to become a Jesuit priest. He later taught at Fordham while also ministering at Blackwell’s Island (now Roosevelt Island) in the charity and smallpox hospitals. He died in 1901.

In September 1912, a defining moment in the history of psychoanalysis took place when Carl Gustav Jung (above, left) delivered a series of lectures at Fordham. In the lectures, part of an extension course in nervous diseases that drew dozens of scientists to Rose Hill, he made a decisive break from his friend and mentor Sigmund Freud (above, right), rejecting Freud’s broad application of sexuality to the explanation of human behavior and diverging from his work in other ways too.

129. A Tree Near Cunniffe House Predates the Revolutionary War

One of the oldest American elm trees in New York City has its home near Cunniffe House on the Rose Hill campus. It is estimated to be more than 270 years old.

130. Farm-to-Table Dining Was Popular on Campus in the 19th Century

In the early years of Fordham, when funding for the new college was tight, one thing helped to defray costs and sustain students for years: the food that was cultivated on campus. “This was a working farm from colonial times all the way down to about 1907 or so,” said Roger Wines, Ph.D., FCRH ’54, professor emeritus of history at Fordham. The food was produced within sight of the building (today’s Cunniffe House) where students studied, slept, and ate. An orchard, vineyard, and pasture with 30 to 40 cows were among the early campus fixtures.

131. Once Upon a Midnight Dreary, Edgar Allan Poe Hung Out on Campus 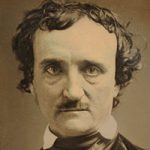 In 1846, a struggling 37-year-old writer named Edgar Allan Poe moved into a three-room cottage near campus and became a regular visitor and welcome guest. He befriended several Jesuits, including Edward Doucet, S.J. They gave the future literary giant free rein in their library, where he often stayed late into the night. “He was well informed on all matters,” Father Doucet later recalled. Rumor has it that the University Church’s original bell was the inspiration for Poe’s haunting poem “The Bells.” 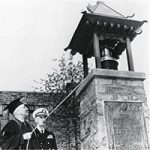 On May 11, 1946, U.S. President Harry S. Truman received an honorary degree from Fordham on Keating Terrace, known today as the Terrace of the Presidents. Before addressing the University community, he became the first person to officially ring the Victory Bell at Fordham. The bell—salvaged from the Japanese aircraft carrier Junyo and installed outside the Rose Hill Gymnasium—was a gift to Fordham from Admiral Chester W. Nimitz, who dedicated it as a memorial to “Our Dear Young Dead of World War II.”

133. Father McShane Is a #Selfie Master

As best we can tell, the photo at the bottom of this page is the one that earned Fordham’s president a reputation as a “selfie master,” as one current student has put it. At the 2014 Fordham Founder’s Award Dinner, Joseph M. McShane, S.J., posed with Founder’s Scholars (from left) Alexandria Johnson, FCLC ’14; Sal Cocchiaro, now a senior at the Gabelli School of Business; Robyn Ayers, FCLC ’16; Gabriela Cinkova, GABELLI ’15; and Christopher Wilson, now a Fordham College at Lincoln Center senior. 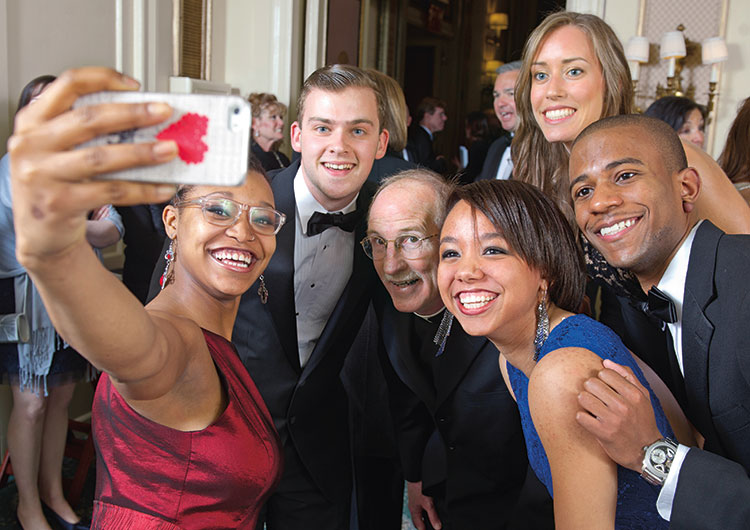 More than 1,100 guests contributed a record-setting $2.6 million at the Fifteenth Annual Fordham Founder’s Award Dinner. The 2016 gala, held in the grand ballroom of the Waldorf Astoria, supported 22 Founder’s Scholars—eight more than in 2015. 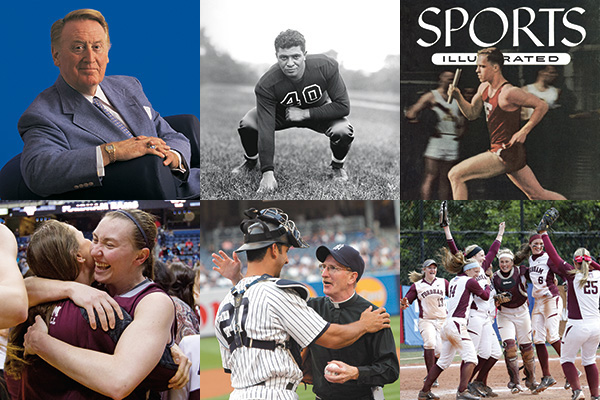