skip to main content
Return to Fordham University
You are at:Home»Fordham Magazine»Features»Sports 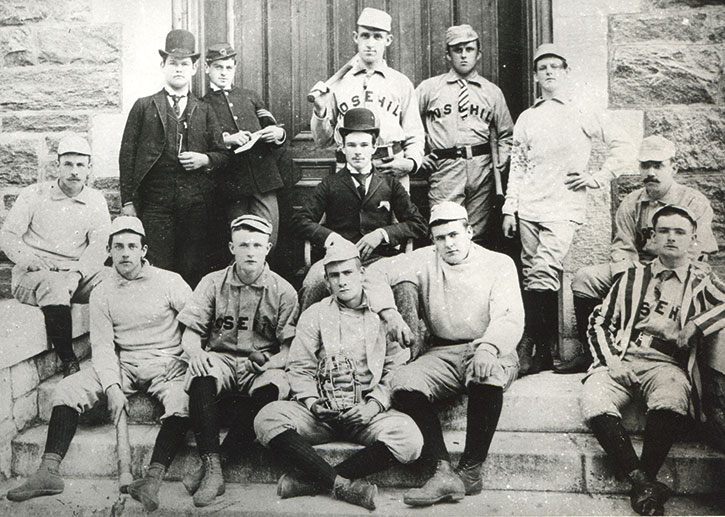 135. Our Baseball Team Is the Oldest in the Bronx

On November 3, 1859, the newly formed Rose Hill Base-Ball Club competed in the first college game played under New York rules—that is, with nine men on each side. The Rose Hills beat Xavier, 33 to 11. It was the first of Fordham baseball’s 4,000-plus wins, more than any other Division I team.

136. Vin Scully Is the Dean of Fordham-Trained Sportscasters 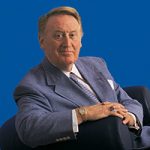 Vin Scully, FCRH ’49, called his final baseball game on October 2, 2016, capping a 67-year career as the winsome, lyrical Voice of the Dodgers. “He’s blazed a path for a lot of Fordham student broadcasters who are now in the business,” New York Yankees announcer Michael Kay, FCRH ’82, once said.

137. One Alumnus Won the World Series as a Yankee and a Met

Johnny Murphy, FCRH ’29, is one of the all-time great ecumenical figures in New York baseball history: The former Fordham ace was a star reliever for the Yankees during the 1930s and ’40s, and he was general manager of the “Miracle Mets” team that won the 1969 World Series.

138. Our Student-Athletes Make the Grade

The Atlantic 10 Commissioner’s Honor Roll recognizes student-athletes who maintain a 3.5 GPA or better. Last spring, 143 Fordham student-athletes made the list, far above the league average of 121. 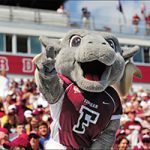 In 1936, Cleveland’s pro football team chose the name Rams in honor of the Fordham Rams. Now known as the Los Angeles Rams, they are the only NFL franchise named after a college team.

Fordham has a rich football history, with roots in the 19th century. But in 1954, Fordham discontinued the program because of cost concerns, and it didn’t return for another decade, when it was brought back by an enterprising group of students. By 1968, Fordham had the topranked club football team in the country.

141. When Football Made Its TV Debut, Fordham Was the Star 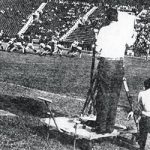 On September 30, 1939, Fordham competed in the first live televised broadcast of a football game. That afternoon, NBC sent two iconoscope cameras (recently patented by RCA), an announcer, and a crew to Randall’s Island Stadium, where Fordham beat Waynesburg, 34–7.

Five months later, on February 28, 1940, Fordham made TV history again, playing in the first live TV broadcast of a college basketball game. That day, however, the Rams were unlucky. They lost to Pittsburgh at Madison Square Garden.

First-year coach Richard “Digger” Phelps (middle row, far right of the team photo) led the Rams to a 26–3 record, a No. 7 national AP ranking, and a third-place finish in the East Regional of the NCAA Tournament in 1971. “It was great to play at Madison Square Garden and see all the hard hats in the stands,” he said in 2010. “We were blue collar, and it was a total team effort that electrified the city.”

144. We Are Three-Time Patriot League Champs in Football

After graduating from Fordham in 1868, Cuban native Esteban Bellán played for the Troy Haymakers (forerunner of the San Francisco Giants), becoming the first Latin American to play professional baseball in the United States.

Jack Mulcahy graduated from Fordham in 1894 and rose to national prominence at the 1904 Olympics in St. Louis, where he and his partner earned two medals: the gold in double sculls and the silver in coxless pairs. A decade later, he returned to his alma mater and became the founding coach of the Fordham rowing team.

147. Frankie Frisch Was the Fordham Flash 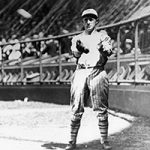 Soon after Frankie Frisch arrived at Fordham in 1916, he was dubbed the Fordham Flash for his speed and athletic prowess. Three years later, he left the University to play for the New York Giants, and in 1921, he and his teammates won the World Series. They won it again the following year. Later, as playermanager with the St. Louis Cardinals, he instilled in his team an appreciation for hardnosed play that earned them the moniker the Gashouse Gang. He was inducted into the National Baseball Hall of Fame in 1947.

148. We Built Our Football Legacy on Seven Blocks of Granite 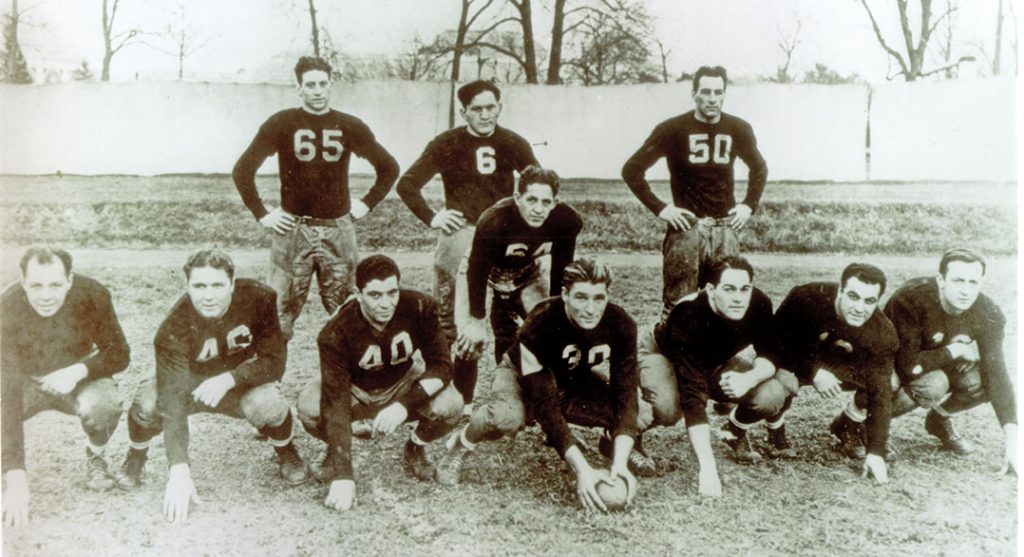 Fordham football’s famed linemen, the Seven Blocks of Granite—John Druze, Al Babartsky, Vince Lombardi, Alex Wojciechowicz, Nat Pierce, Ed Franco, and Leo Paquin—helped the Rams dominate the sport during the mid-1930s, capturing the attention of the nation. As David Maraniss would write in When Pride Still Mattered: A Life of Vince Lombardi, Fordham’s “contests on autumn afternoons were held in front of thunderous crowds and covered by the most influential sportswriters in America.” Lombardi (first row, third from left) would go on to greater fame as an NFL head coach and cultural icon.

149. The First Family of Football Is a Fordham Family

Once the youngest owner of a professional sports team, Fordham alumnus Wellington Mara, FCRH ’37, grew up to become the patriarch of the National Football League. When he was 9 years old, Mara joined the New York Giants as a ball boy, shortly after his father purchased the team. In 1930, his father named him and his brother Jack co-owners. Mara was 14 years old at the time. Under his stewardship, the Giants became one of the marquee names in professional sports, winning six league championships—including two Super Bowls—nine conference championships, and 13 division championships. When he died in 2005, his widow, Ann, became a coowner of the team. Their son John Mara, the Giants’ current president and CEO, is a 1979 graduate of Fordham Law School. 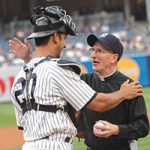 Joseph M. McShane, S.J., president of Fordham, threw out the ceremonial first pitch at Yankee Stadium on July 1, 2009, before the Yankees’ 4–2 win in the Bronx against the Seattle Mariners. The Jesuit right-hander, who blessed Yankees catcher Jorge Posada after making the toss, made his Yankee Stadium debut to commemorate the 150th anniversary of Fordham baseball.

151. A Ram Once Graced the Cover of Sports Illustrated 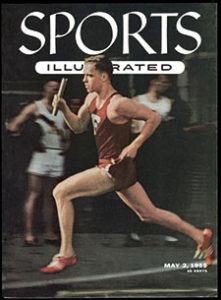 Tom Courtney, FCRH ’55, was featured on the cover of the May 2, 1955, issue of Sports Illustrated wearing his Fordham gear. A year and a half later, he won two gold medals at the 1956 Summer Olympics in Melbourne, Australia. He won the 800-meter race and later anchored the U.S. team’s victorious four-man 1,600-meter relay.

Jack Coffey brought national attention to the University’s sports teams with his larger-than-life persona and his silver tongue. After graduating from Fordham in 1910, he played pro baseball for 12 years before returning to Rose Hill. From 1926 to 1958, he served as graduate manager of athletics. Proficient in Latin and Greek and fluent in French, Spanish, German, and Italian, Coffey was an early master of public relations. Today, Fordham remembers its sportsman-scholar in all seasons. Jack Coffey Field is the home of the University’s football and soccer teams. 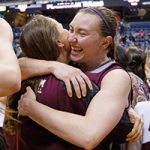 In 2011, head coach Stephanie Gaitley came to Fordham determined to transform a women’s basketball program that had not posted a winning record since the mid-1990s. In just three years, she led the Rams to a 25–8 record and their first-ever Atlantic 10 title.

During her Fordham playing days, Anne Gregory O’Connell, FCRH ’80, helped lead the women’s basketball team to a 91–34 record with four consecutive postseason appearances. She is Fordham’s all-time leader in women’s basketball for points scored (2,584) and rebounds (1,999). In 2010, when Fordham retired her No. 55 in a ceremony in the Rose Hill Gym, O’Connell paid tribute to her teammates. “We got along off the court. It sounds so goofy, but we really did,” she said, “and that helped us tremendously on the court.” 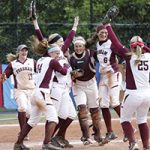 After an opening-round loss in the Atlantic 10 Tournament last May, the Rams rallied, winning four games in a row to clinch their fourth consecutive league title.

156. A Former Ram and Olympian Creates Hope for Girls 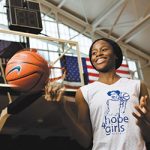 Mobolaji Akiode, GABELLI ’04, was a standout on the Fordham women’s basketball team and later played on Nigeria’s national team in the 2004 Olympics, the year she graduated from Fordham. After working as an accountant at ESPN, she returned to her native Nigeria to found Hope 4 Girls Africa, a nonprofit that helps young women build confidence through the power of sports. 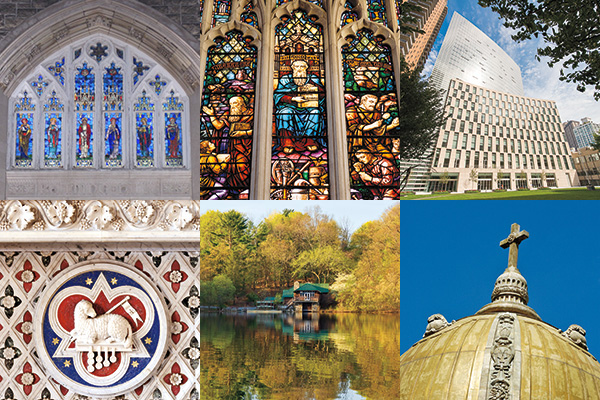