skip to main content
Return to Fordham University
You are at:Home»Fordham Magazine»Features»E. Gerald Corrigan, a Risk Manager Who Excelled in Public Service and on Wall Street, Dies at 80
Photo by Chris Taggart
E. Gerald Corrigan, Ph.D., who earned master’s and doctoral degrees in economics at Fordham during the 1960s, served as a University trustee, and had a long, exceptional career in both public service and on Wall Street, died on May 17 at NewBridge on the Charles in Dedham, Mass., where he was in care for Alzheimer’s disease. He was 80 years old.

“Jerry was known as one of the most honest and wise men in international business,” said Joseph M. McShane, S.J., president of Fordham, in an announcement to the University community about Corrigan’s passing. “He always said his Jesuit education equipped him to work through thorny finance questions and make good decisions. Thanks to him, our students and alumni are better prepared as well.”

Corrigan accepted a position as an economist at the Federal Reserve Bank of New York in 1968, when he was a doctoral candidate at Fordham. He had taught at the University the year before, and although he planned to return to a career in teaching, he instead rose through the ranks of some of the country’s most prominent economic institutions.

In 1979, Corrigan left the New York Fed—where he had become vice president for planning and domestic open market operations—to serve as special assistant to Federal Reserve Board Chairman Paul Volcker in Washington, D.C. The following year, he was named president of the Federal Reserve Bank of Minneapolis, where he served until 1984.

On January 1, 1985, Corrigan returned to the New York Fed as chief executive officer and vice chairman of the Federal Open Market Committee. When the stock market crashed on October 19, 1987—a day that would become known as Black Monday—Corrigan played a pivotal role in getting the market back on its feet by convincing bank lenders to provide liquidity for the financial system.

“Let me tell you, unless you’ve been there, you can’t begin to understand how difficult the decision-making is in those circumstances,” Corrigan told Fordham Magazine in 2009. “You have imperfect information. You have very little time. And you know that inaction is action.” 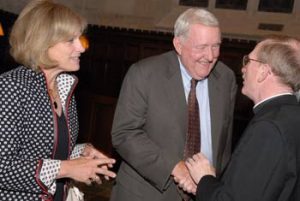 After nine years leading the New York Fed, Corrigan moved to the private sector in 1994, when he became a managing director at Goldman Sachs. He was named a partner at the firm two years later. Until his retirement in 2016, he wore many hats as a senior member of then-CEO Lloyd Blankfein’s executive team. Corrigan was chair of the company’s two deposit-gathering banks in New York and London, and he co-chaired several committees tasked with analyzing risk, including the Global Risk Management Committee.

In 2008, as a member of the firm’s Counterparty Risk Management Policy Group at Goldman Sachs, he helped develop what many saw as a blueprint for global financial system reform, and as co-chair of Goldman’s Business Standards Committee, he worked to strengthen relationships with clients who were reeling from the financial crisis.

In his 2014 memoir, Stress Test: Reflections on Financial Crises, former U.S. Treasury Secretary Timothy Geithner described Corrigan “as a kind of John Madden of finance—big, gruff, old-school, a well-respected student of the game, with a similarly animated rhythm to his commentary.”

When Corrigan retired, Blankfein and Gary Cohn, then president of Goldman Sachs, wrote in a companywide memo, “We have benefited enormously from his leadership in the global financial community, experience as a central banker, extensive knowledge of the complexities of financial systems and exceptional judgment.”

An Ardent Champion of a Fordham Jesuit Education

Corrigan was born on June 13, 1941, in Waterbury, Connecticut, to an innkeeper and a librarian. He received his bachelor’s degree from Fairfield University in 1963, at which point he began his graduate studies at Fordham, earning master’s and doctoral degrees in economics in 1965 and 1971, respectively. While studying at Fordham, Corrigan lived off campus, in a walk-up on 183rd Street and Park Avenue in the Bronx, and balanced his classes with a job bagging groceries at an A&P on Webster Avenue.

At Fordham, he developed a strong bond with Joseph Cammarosano, Ph.D., an economics professor and administrator at Fordham who had served as an economist in the U.S. Bureau of the Budget. Together, they worked on an economic development study of the Bronx while Corrigan completed his master’s degree.

“He was a pied piper,” Cammarosano said of his former student, who recruited and led 50 students who took part in the study, knocking on doors in neighborhoods around the Fordham campus to get information. “Jerry was a very charismatic young man, and he had a can-do attitude. … Before I was through half a sentence, Jerry would know exactly what I wanted.”

In a 2009 interview with Fordham Magazine, Cammarosano also noted Corrigan’s humility, saying, “Jerry is a Jesuit product. He’s not one to promote himself openly. He promotes himself through what he does.” Cammarosano also remembered Corrigan’s competitive spirit, including his “sharp elbows under the basketball hoop.”

For his part, Corrigan credited his Jesuit education, both at Fordham and Fairfield, as instrumental to the critical thinking skills he brought to his career.

“The philosophy of education that’s been associated with the Jesuits for hundreds of years puts great emphasis on liberal arts and humanities,” Corrigan said. “But it puts even greater emphasis on simple, straightforward propositions of trying to teach people how to think. That’s the genius of it.”

And while Corrigan did not pursue a career in teaching, he stayed connected to Fordham in many ways and was one of its most ardent champions.

A member of the University’s Board of Trustees from 1987 to 1989, he made several generous gifts to benefit Fordham students and faculty. In 2000, he established the E. Gerald Corrigan, Ph.D., Endowed Scholarship Fund, which provides support to full-time Fordham students who demonstrate both academic excellence and financial need, with preference given to minority students. Seven years later, he made another gift to further support the scholarship fund and to create an endowed professorship, the Corrigan Chair in International Business and Finance at the Gabelli School of Business. 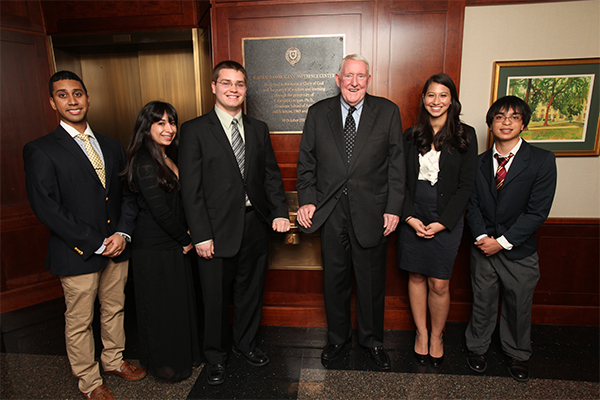 Along with the scholarship fund and endowed professorship, Corrigan’s name lives on at Fordham’s Lincoln Center campus, where the Lowenstein Center’s 12th floor was officially christened the E. Gerald Corrigan Conference Center in a 2013 ceremony. He was inducted into the Fordham University Hall of Honor in 2012, and one year later, he received the Fordham Founder’s Award, given to people whose “personal and professional lives reflect the highest aspirations of the University’s defining traditions, as an institution dedicated to wisdom and learning in the service of others.”

In addition to his gifts to the University, Corrigan was generous with his time, coming back to campus often to share his experience with students. In April 2005, he spoke to more than 120 students, alumni, and faculty of the Department of Economics. He delivered the Graduate School of Arts and Sciences’ Gannon Lecture in 2006. And in a 2010 lecture titled “Leadership: Making the Right Things Happen,” Corrigan spoke to a Fordham audience about the criteria that make for truly great leaders.

“They recognize and embrace the proposition that there is a time when the public interest must come first—before the natural and appropriate responsibility to further the interests of shareholders and other private concerns,” Corrigan said.

“They understand that there are principles that should never be breached. They have the courage of their convictions and the drive to do what is right for its own sake. Lastly, they are men and women of superior integrity.”

‘Working Toward the Good of the World’

In addition to his devotion to the Fordham community, Corrigan supported many other institutions. He was a trustee of Macalester College in St. Paul, Minnesota, from 1981 to 1986, and he served two terms on the board of Fairfield University before being named a trustee emeritus of his undergraduate alma mater. In 2004, he established the Ernesto Zedillo Scholarship at Fairfield, and in 2007, he endowed a new professorship at the university, the Corrigan-Minehan Professorship in Political Science, named after him and his wife, Cathy E. Minehan, who served as president and CEO of the Federal Reserve Bank of Boston from 1994 to 2007.

He also funded scholarships at the University of Rochester, and among his and Minehan’s other philanthropic gifts was one to Massachusetts General Hospital in 2012 that supports innovation and research in the Corrigan Women’s Heart Health Program and throughout the Corrigan Minehan Heart Center. Along with Minehan, Corrigan was a trustee of the Challenger Foundation (formerly known as the Corrigan Foundation), which supports education, health and human services, and research in international economics and finance.

In a life filled with professional success and accolades, those who knew Corrigan point out his love for quiet moments with his family or while fly fishing and golfing, as well as his honesty and grounded nature.

“Jerry was a person who solved problems,” Minehan said. “He would step into a situation, and his clear way of thinking—which I know he attributed to his Jesuit education—was always the gold star in terms of how to get through a crisis and how to prevent a crisis from happening again.”

She added that the Jesuit focus on the common good was something he took to heart.

“Being all about working toward the good of the world—that really spoke volumes to Jerry, and that’s what his life was about.”

A private funeral Mass for close family and friends will be held on Monday, May 23, at 10 a.m.  and will be livestreamed on YouTube. A celebration of his life will be held in New York City at a later date.