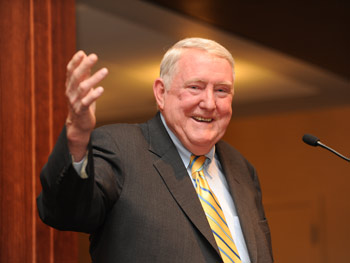 E. Gerald Corrigan, Ph.D., tells the audience that no one is predestined to be a leader.
Photo by Chris Taggart

Scores of books are published each year on effective leadership techniques. What can be learned from a man who has never read any of them?

As it turns out, quite a lot.

On Jan. 26, roughly 140 people were treated to thoughts on leadership from E. Gerald Corrigan, Ph.D. (GSAS ’65, ’71), managing director of Goldman Sachs and Co., who spoke as part of the Flaum Leadership Lecture Series.

In his hour-long address, “Leadership: Making the Right Things Happen,” Corrigan gave his assessment of great leaders, listed the characteristics they possess, and recalled personal experiences with mentors who fit those qualifications.

“I have never read any books about leadership, and after I finish what I have to say tonight, you might conclude that I should have read some of them,” he said jokingly.

In more than 40 years working at the top levels of international finance, most notably as president and CEO of the Federal Reserve Bank of New York from 1984 to 1993, there is little doubt that Corrigan knows his subject matter.

• the ability to listen;
• patience;
• pragmatism;
• sharing, rather than monopolizing, information;
• respectfully but effectively mentoring the development of young people;
• championing diversity in all forms;
• commanding the respect of peers as well as competitors.

“These are necessary—but not sufficient—criteria that make up truly great leaders,” he said, adding that top leaders carry three traits that place them in a class by themselves.

“They recognize and embrace the proposition that there is a time when the public interest must come first—before the natural and appropriate responsibility to further the interests of shareholders and other private concerns,” Corrigan said.

“They understand that there are principles that should never be breached. They have the courage of their convictions and the drive to do what is right for its own sake.

“Lastly, they are men and women of superior integrity,” he said.

Corrigan then related his personal experiences with four outstanding individuals.

“Paul Volcker, chairman of the Federal Reserve from 1979 to 1987, dedicated his entire life to upholding the public interest,” he said.

Corrigan told the audience about accompanying Volcker on a fishing trip in June 1980, a time when the nation was facing 20 percent interest rates and 10 percent unemployment.

The group had stopped for breakfast in Ennis, Mont. Conversation in the establishment, which was filled with roughly 50 cowboys, came to a halt when the economists entered. Corrigan feared the worst when one of the cowboys approached their table and reached into his pocket.

“He pulled out his wallet, took out a $20 bill and asked Volcker, ‘Mr. Chairman, could you autograph this for me?’” he recalled.

“These cowboys could recognize what Volcker was doing—that he was going to be the one to deal with the problem of inflation, to step up and do the job that needed doing.”

Gordon Richardson, governor of the Bank of England from 1973 to 1983, also left a mark on Corrigan.

“Richardson was the most eloquent public speaker I have ever witnessed,” he said. “He would give talks on economics and effortlessly lace in topics from every facet of human existence.”

Finally, Cyrus Vance, secretary of state under Jimmy Carter, was a model of quiet strength and integrity.

“Cy Vance had utter faith in the power of diplomacy to trump the threat of confrontation,” he said. “When he was Carter’s secretary of state and Carter decided on a military mission to rescue the hostages in Iran, Cy made his case against it. He lost. And as a matter of personal conviction, he resigned.

Although those four men differed in their management and leadership styles, each shared a trait that Corrigan called “presence.”

“Each of them could walk into a room full of strangers and the entire room could instantly tell they were looking at a true leader,” he said. “I have had the incredible good fortune to work with and to learn from these four exceptional humans.”

The Flaum Leadership Lecture Series was founded by Sander Flaum to provide graduate business students with opportunities to connect with leaders from the world of business.