skip to main content
Return to Fordham University
You are at:Home»Fordham Magazine»Features»Bronx Doctor Donates Medieval Manuscript Facsimiles to Fordham
Above: A section of The Nativity, illumination for the hour of Prime in the Très riches heures, illuminated manuscript by the Limbourg Brothers. France, ca. 1412–1416. Chantilly: Musée Condé, ms. 65, fol. 44v.
The Très riches heures, a book of prayers commissioned for a French prince, is one of the most famous illuminated manuscripts of the 15th century. It contains dozens of images painted with rich pigments and embellished with gold. The original sits in the Musée Condé in Chantilly, France.

But thanks to a fine art facsimile of the historic tome in Fordham’s Walsh Library, students can flip through the lush pages and absorb a visual representation of medieval art and religion.

The Très riches heures facsimile is one of 300 books and objects donated to Fordham by Dr. James Leach, a New York physician who’s been curious about medieval manuscripts and liturgical books since he was young.

“When I was growing up, I had an interest in Latin and in the church,” said Leach, who heads the dermatology department at Lincoln Medical Center in the Bronx. “The prayer books I was familiar with were a springboard to begin looking at the older manuscripts.”

He began amassing a collection of fine art facsimiles of medieval manuscripts, which have been produced since around 1990, typically in limited-edition runs of 300 to 900 copies. He thought that Fordham, as a Catholic university with an established medieval studies program, would be the perfect repository for these works. Leach also donated a sizable collection of original Catholic prayer missals from the late-19th to early-20th centuries.

Nina Rowe, PhD, chair and associate professor of art history at Fordham, said the University is lucky to have such high-quality reproductions available for students.

Rowe said the Très riches heures is one of the “greatest hits” of medieval art history. She also has a few other favorites among the collection.

“I’m delighted to be able to teach students from the facsimiles of the Lindisfarne Gospels, an English monastic manuscript made around the year 700 and renowned for its so-called Carpet Pages, full-page designs with intricate interlace, often in the form of the cross,” she said.

“Another favorite facsimile of mine reproduces a Moralized Bible (sometimes called the Saint Louis Bible) from Paris, 1226 to 1236. Every page features eight circles arranged in four pairs, each with little scenes linking a vignette from the Hebrew Bible to a Christian or contemporary commentary. The images are especially fun when they depict the perceived vices of early 13th-century Parisian life, evoking the real world of the street in a remote period.” 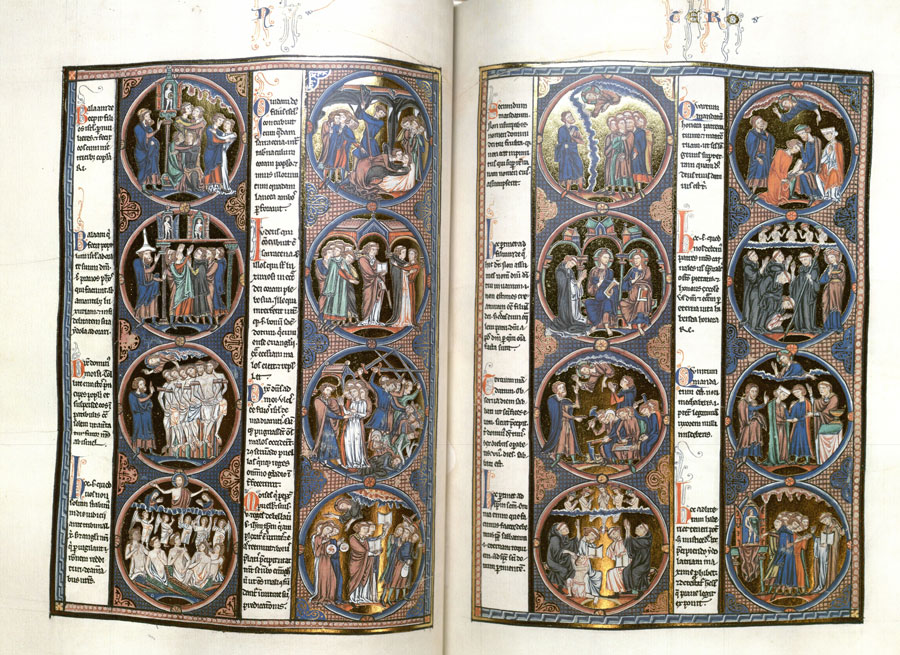 “The facsimiles are an extraordinary example of medieval artistry,” she said. “They’re done with highly specialized devices, and the bindings are reproductions as well.”

The cover of a facsimile of the Sacramentary of Henry II, a liturgical manuscript from the late-10th to early-11th century, includes an intricate copy of the original’s ivory relief. Other facsimiles Leach has donated include the Eton Choirbook and the Lorsch Gospels. 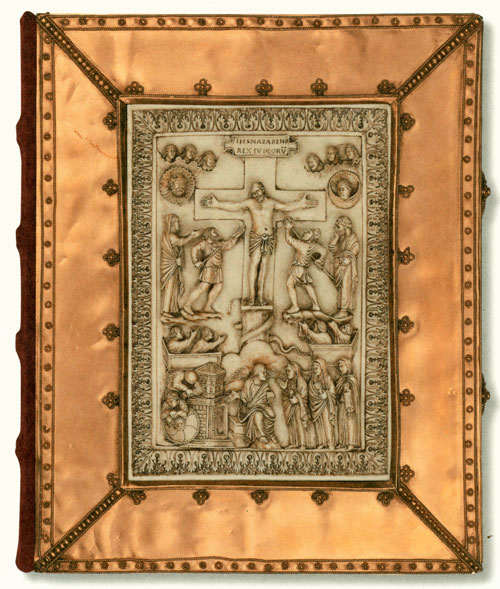 The cover of a facsimile of the Sacramentary of Henry II, which features an intricate plastic copy of the original’s ivory relief

The recent establishment of Fordham’s Shvidler Chair in Judaic Studies, and the collection of Judaica being assembled by Magda Teter, PhD, the chair’s inaugural holder, prompted LoSchiavo to ask Leach if he would consider donating a a Haggadah, a book used during Passover seders. He was happy to oblige, and earlier this year donated a facsimile of the Barcelona Haggadah. The original dates to the middle of the 14th century.

Leach hopes his gifts will help Fordham students learn that art and illuminated manuscripts flourished during the medieval period, even though the era sometimes gets a bad rap.

“Most important is that they realize that ‘medieval’ is not purely a derogatory term,” he said. “It was an age of faith and artistic productivity that contributed to Western civilization.”