skip to main content
Return to Fordham University
You are at:Home»Inside Fordham»Scholar Shares Little Known History of Hebrew Texts
“Jewish studies is extremely important for understanding the history of Christianity, especially Catholicism.”
When Magda Teter, PhD, was young, her father made her aware of the Jewish establishments that were lost when Jews from their towns in Poland were sent away to concentration camps. Before World War II, Teter said, Eastern Europe, including Poland, had the largest Jewish population in the world; it was impossible to not see remnants of the past.

“You can’t escape noticing the absence of the former presence,” she said.

On Nov. 16, Teter will assume the newly endowed Shvidler Chair in Judaic Studies at a ceremony at the Lincoln Center campus. The chair, housed in the Department of History, was created with a $3 million gift from Eugene Shvidler, GABELLI ’92. 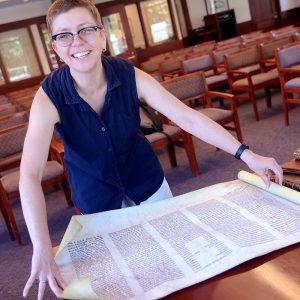 At the installation, Teter will deliver a lecture, “Alienation to Integration: Rethinking Jewish History,” to which she will bring an intimate awareness of preserving knowledge inspired, in part, by her father. She said one of the things her father witnessed as a young child was the liquidation of the Jewish ghetto in his town. Later, he wandered into an abandoned synagogue and found sacred scrolls strewn about the floor.

“I don’t know how a five- or six-year-old child responds to that,” she said.

Teter has begun to assemble a new collection of rare Hebrew scrolls and books that will be housed at Fordham Libraries and used by students taking her courses.

“This is a tremendous acquisition,” said Linda LoSchiavo, director of Fordham Libraries. “The items will be incorporated into our special collections and we’ll be able to use them for exhibits.”

An important aspect of the collection is its usability, said Teter. While the books are valuable and rare, many are second and third editions, rather than first—chosen because Teter wants her digital-focused students to handle and use the old texts.

“My students are always shocked when I bring a 500-year-old book to class,” she said. “They’ve never touched something that old.” 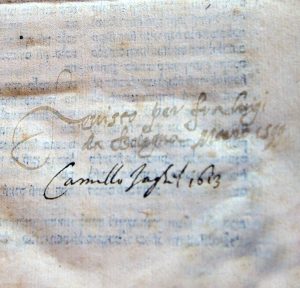 Signatures of two Catholic censors: Luigi da Bologna from 1599 and Camillo Jaghil from 1613.

While she applauded the accessibility afforded by digitalization, she said that scale is often lost in reproduction—to say nothing of the feel.

“On the screen everything is the same size, the physicality gets lost,” she said. “It’s important for this generation to feel where the font pressed against the page, to understand that every single letter was once a physical object that had been put there by someone, backwards and upside-down, and then pressed [to create an image].”

Teter said that it is fortuitous that the Shvidler chair has been established 50 years after Nostra aetate, the Vatican II declaration that changed the course of church relations with Jews by encouraging the study of Hebrew texts for mutual understanding.

“Jewish studies is extremely important for understanding the history of Christianity, especially Catholicism,” she said. “Teaching Jewish studies here will illuminate aspects of the Catholic history in ways that would not have been illuminated without thinking of Jews as being part of that mutual history.”

But not all of that history between Judaism and Catholicism is easy, she said. Church laws required Jews to bring their books to the church to be licensed—and sometimes the books were censored. Teter has purchased two copies of the same book published in Venice in 1547, one of which is expurgated and the other is not. Placed side-by-side, researchers can determine which content was blacked out.

“Anything that they found offensive or dangerous to the church they censored, expurgated, or banned,” said Teter.

“People who get exposed to this will see the sting of censorship in its raw form,” said Stephen Freedman, PhD, provost of the University. “This exposure will get students to think about the differences, and that is extremely important.”

Freedman said that the interreligious dialogue fits into the larger ecumenical context of the University. He said that the McGinley lecture series by Patrick Ryan, SJ, McGinley Professor of Religion and Science, has created an ongoing dialogue between Muslims, Jews, and Christians. And Fordham’s Orthodox Christian Studies Center’s Solon and Marianna Patterson Triennial Conference on Orthodox/Catholic Dialogue fosters a conversation between Catholics and Orthodox Christians.

“By exploring similarities and differences, you respect them,” he said.

Example of expurgation of a text found offensive by Christian censors on the Sefer Mitzvot Gadol by Moses of Coucy (d. 1260), published in Venice by Daniel Bomberg in 1547.

Beginning on Nov. 16 the original books will be on display on the 4th floor of the Walsh Library, in O’Hare Special Collections, Mon. through Fri. 9 a.m. to 5 p.m. Quinn Library at Lincoln Center will have a similar exhibit using photographs of the originals.