To illustrate the story, “A Communal Reckoning,” we commissioned Bronx artist Laura James, a painter and illustrator who specializes in sacred images and scenes of everyday life. James uses vibrant colors and draws on Ethiopian Christian iconography in her work, an influence evident in the wide, almond-shaped eyes of the people she depicts.

“Those eyes—they’re all over in Ethiopian art, but especially in the churches,” she said. “They often have angels painted on the walls, just heads and wings with these great big eyes, and [the idea is] that they’re watching you, they’re protecting you.”

For Together We Rise, the painting featured on the cover, James worked with Fordham Magazine art director Ruth Feldman. She chose to depict the story’s “secular theme with that ancient style,” she said, and with Fordham’s Keating Hall and Edwards Parade in the background. 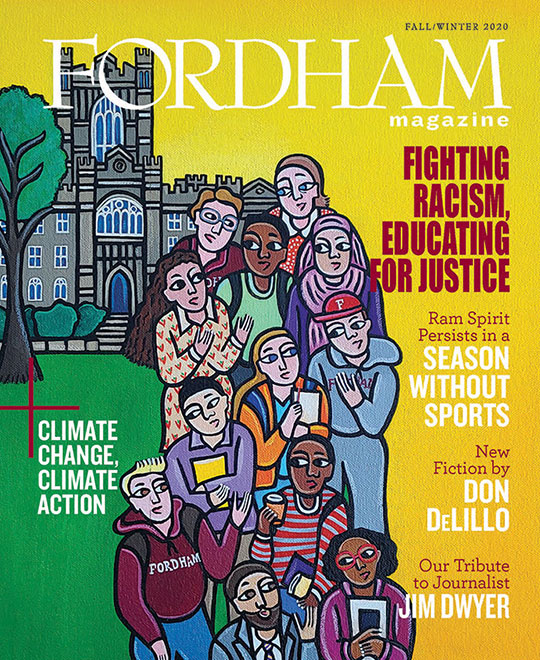 “It’s not churchy; it’s not a Bible story,” James said of the painting, but she wanted to give people a sense of the spiritual nature of the work of anti-racism, particularly at a Jesuit university. She said that came through to her as she read the cover story, a roundtable conversation among six members of the University’s Board of Trustees.

“To see people, to hear them, to talk and communicate—it’s all very, very important. There are more students in the image than anything else, and it really is up to them to hold people accountable and make sure discussions happen, the listening and the hearing, and the seeing with these eyes,” she said.

“We have to see the humanity and the divinity in one another, because yes, we are all made in the image of God, no matter what color you are.”

James said she paid particular attention to the tone of the conversation depicted on the cover.

“Everybody’s not smiling, ‘Oh, I love you,’” she said. “It’s like, ‘Hey, we’re really looking at each other and saying let’s talk about this. There’s so much to learn. And then we have to do something about it, by the way. We can’t just have all this information and sit on it.’”

‘A Sermon for Our Ancestors’

Together We Rise is not the first time James has mixed sacred and secular with a focus on societal issues. In A Sermon for Our Ancestors (2006), she brought the ancient Ethiopian Christian style to bear on U.S. history, juxtaposing 10 scenes of slavery and the slave trade with the Sermon on the Mount (Matthew 5:1-14). 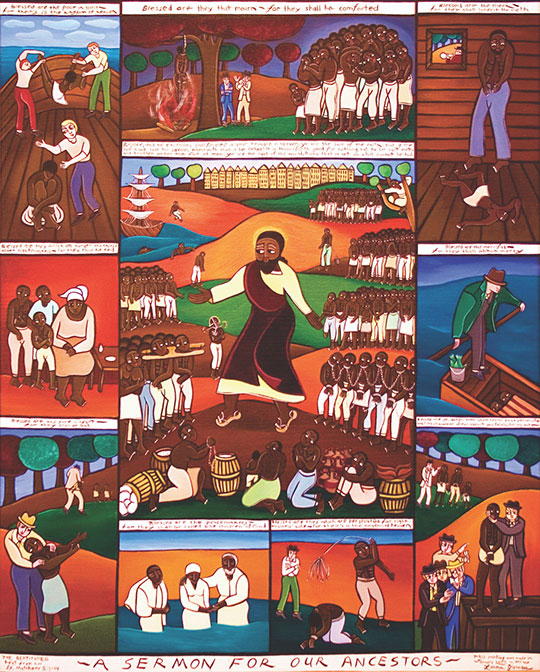 In one scene (in the top center panel), more than a dozen Black people console each other after witnessing a lynching, as two white men look on, indifferent and unmoved. Above that panel James painted the words of the second Beatitude: “Blessed are they that mourn, for they shall be comforted.” And in the painting’s large central panel, Christ addresses groups of enslaved people, some arriving by ship, others in chains, with the words that follow the blessing on those who are persecuted. “Ye are the salt of the earth,” the text reads in part. “Ye are the light of the world.”

“Representing Christ as an African places him in solidarity” with the enslaved people depicted in the painting, Rebekah Eklund wrote in The Visual Commentary on Scripture. “The work’s title points both to the past (the enslaved Africans) and to present-day African Americans (‘our ancestors’). The message is clear: the suffering slaves, and their present-day descendants who suffer still, are blessed.”

The vigilant, mutually supportive group James depicted for Fordham Magazine is more directly related to another one of her earlier works: Love One Another (2000), a detail from which illustrates the feature story in the print edition of the magazine.

James created this earlier work as part of a series of more than 30 paintings she produced to illustrate a Book of the Gospels published by Liturgy Training Publications. She said the Chicago-based Catholic publisher commissioned her to create artworks that would be more inclusive in their depiction of biblical figures and stories, and more reflective of the racial and ethnic diversity of the church itself.

For two decades, the book has been used in Catholic parishes in the Archdiocese of Chicago and throughout the country and the world. It’s currently in its second edition, James said, and this past May, James’ work on it was the subject of a feature in U.S. Catholic magazine.

“The sacred art of Laura James challenges and inspires,” John Christman wrote in that story. “Her compositions are filled with people navigating the difficult task of reaching fullness of life within a community.”

James grew up in Bedford-Stuyvesant, Brooklyn, the youngest of eight daughters of immigrants from Antigua, and she has called the Bronx home for the past 17 years. She said she became more involved in her community after she illustrated a children’s book, Anna Carries Water (Tradewind Books, 2014), and the publisher’s biography for her noted that she lives and works in the Bronx.

Today, she is a member of Bronx Community Board 6, which represents the Bathgate, Belmont, East Tremont, and West Farms neighborhoods, and includes Fordham’s Rose Hill campus. She also promotes the work of other artists as the founding director of BX200: The Bronx Visual Artist Directory, an online database that highlights a curated selection of works by more than 200 Bronx artists, connecting them with collectors, businesses, and other artists worldwide.

In 2020, James collaborated with the nonprofit arts group Chashama to curate four public art exhibitions in the windows of 1 Fordham Plaza, just across the street from the Fordham Metro-North stop and the University’s Rose Hill campus.

James said she designed the installations—including Living Walls, about our connections to the natural world, and Black Lives/Black Matters—to “add a bit of artistic color and happiness to Fordham Road,” and to strengthen pedestrians’ sense of hope and community at “a time when we are all feeling isolated” due to the coronavirus pandemic.

In addition to painting scenes from the Bible, James has created works inspired by Buddhism and by the Yoruba religion as well as ancient Egypt, often highlighting the divine feminine. She is currently working on a series of 10 paintings on the theme of race and reparations that she said is inspired in part by a William Faulkner quote, taken from his 1951 novel Requiem for a Nun: “The past is never dead. It’s not even past.”

James said she is encouraged by the sharpened focus on anti-racism not only at Fordham but throughout the country, particularly among students.

“It’s good—and it’s necessary, it really is, because we cannot go back. All of these Black Lives Matter protests, it’s not like it’s a moment that passed, and it’s done now,” she said. “Once students get to places like Fordham or wherever they’re going to better themselves and their families, they’re going to let people know what’s going on. They’re not going to allow the status quo.”

“We have to move forward,” she added. “[Jesus said,] ‘Love one another.’ That was 2,000 years ago. I don’t know how well that has done, but we’re getting there, slowly but surely—and I think faster now, actually.”

View Laura James’ website to learn more about her and her work.