skip to main content
Return to Fordham University
You are at:Home»Commencement»Commencement 2022»Gabelli Students Honored at Lincoln Center Awards Ceremony
Donna Rapaccioli and Stephani Polakoski
Photos by Bruce Gilbert
With less than 24 hours left before they officially graduated, seniors in the Gabelli School of Business at Lincoln Center gathered on May 20 to receive prestigious honors and to bid farewell to Donna Rapaccioli, Ph.D., who is stepping down as dean of the Gabelli School in July.

The ceremony, which brought family and friends to the McNally Amphitheatre, was the first held in person since 2019. The awards given out included those for admittance to honors societies, outstanding senior thesis, and the Dean’s Award, which was given to Stephanie Polakoski.

Polakoski, a Fordham Founder’s Scholar who was a member of the Dean’s Council and an orientation leader, was lauded for her good cheer, friendly manner, care for others, and enthusiasm. 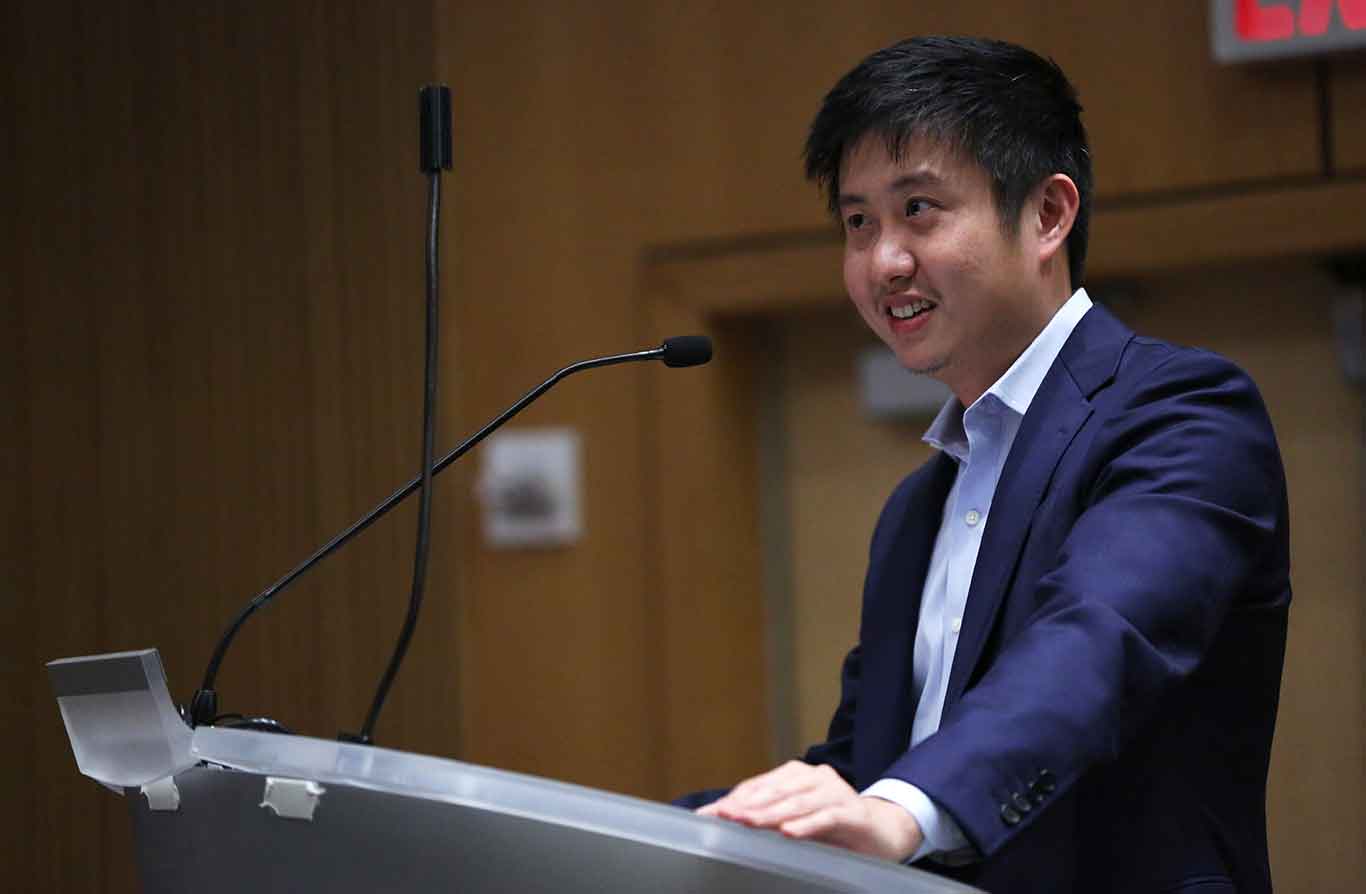 Sihien Goh, the recipient of the 2022 Gabelli School of Business Alumni Inspiration Award

Rapaccioli noted in her remarks that the students, all of whom were earning a Bachelor of Science in Global Business, were part of a program that has grown at a remarkable clip, from around 50 when it debuted in 2017, to 156 this year. What’s more, three of the students also earned second degrees in philosophy, psychology, and history, and 30 completed minors in the humanities.

“You really showed that Gabelli School of Business students are both well-rounded and globally oriented,” she said.

Reflecting back on her 15 years as dean, she said that for all the changes that have happened since 2007, one thing that hasn’t changed has been the feeling of pride in her heart for the students.

“I wanted my legacy to be that every Fordham business student graduates prepared to be a compassionate leader who contributes to society and also lives a balanced life,” she said.

“I’m so grateful that when I look at you, I have a great legacy.” 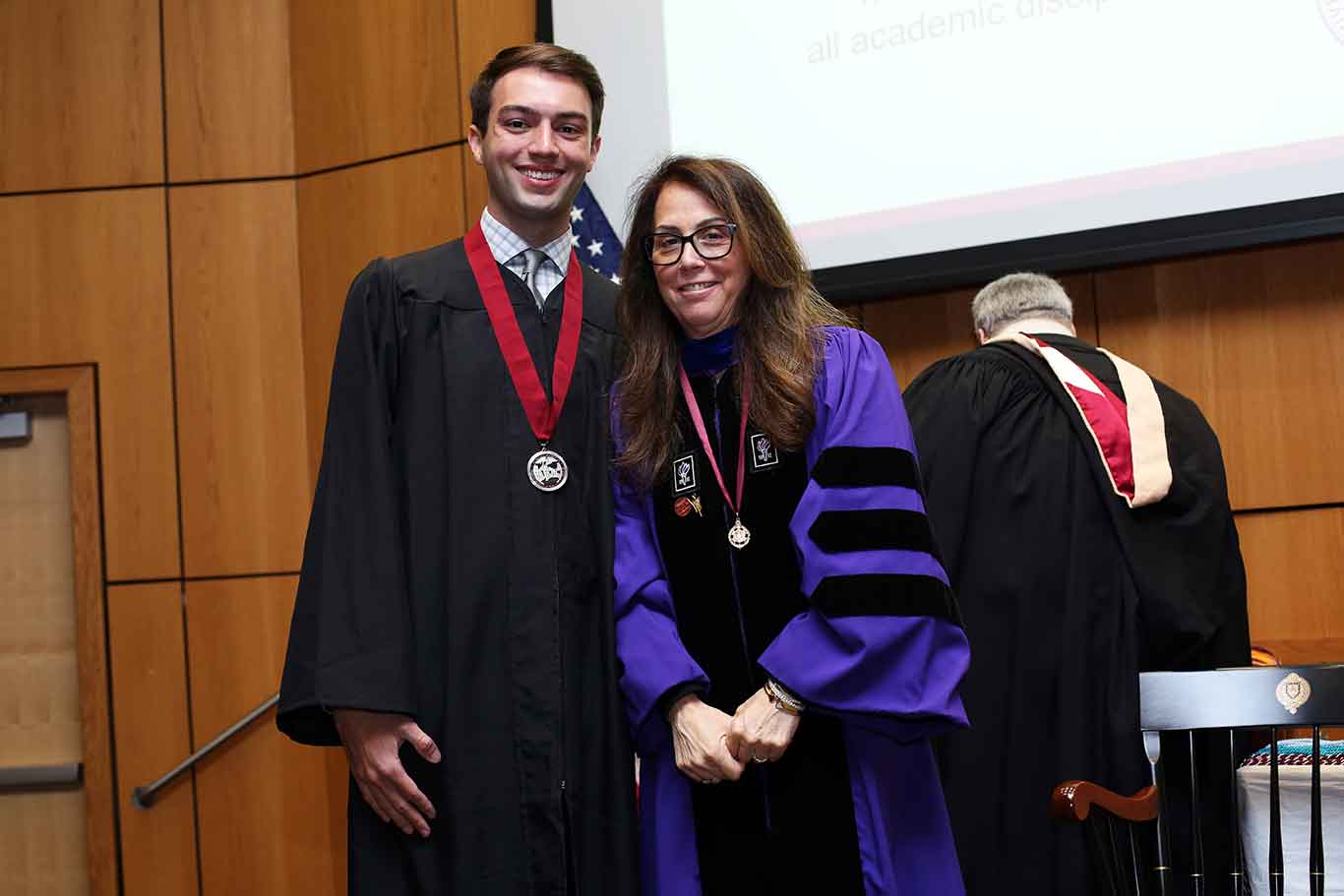 Joseph VanGostein, who was honored for his thesis “The Eco-Consumer Versus Greenwashing.”

Alia Benabdeljalil, a member of the class of 2022 who was chosen to speak on behalf of the class, addressed the gathering via a taped greeting from Dallas, where she recently moved to accept a position with McKinsey & Company.

“For the first time in 18 years, our primary label of ‘student’ is going to fade, and we will have to reinvent ourselves. Some as analysts, some as associates, some as marketers. The list goes on,” she said.

“As we embark on this new challenging and thrilling adventure, please note that you have a village of people supporting you and rooting for you.”

The message delivered by Benabdeljalil—who was also the recipient of the school’s Alumni Chair award—was one that was echoed by Sihien Goh, GABELLI ’13, who was presented the 2022 Gabelli School of Business Alumni Inspiration Award. 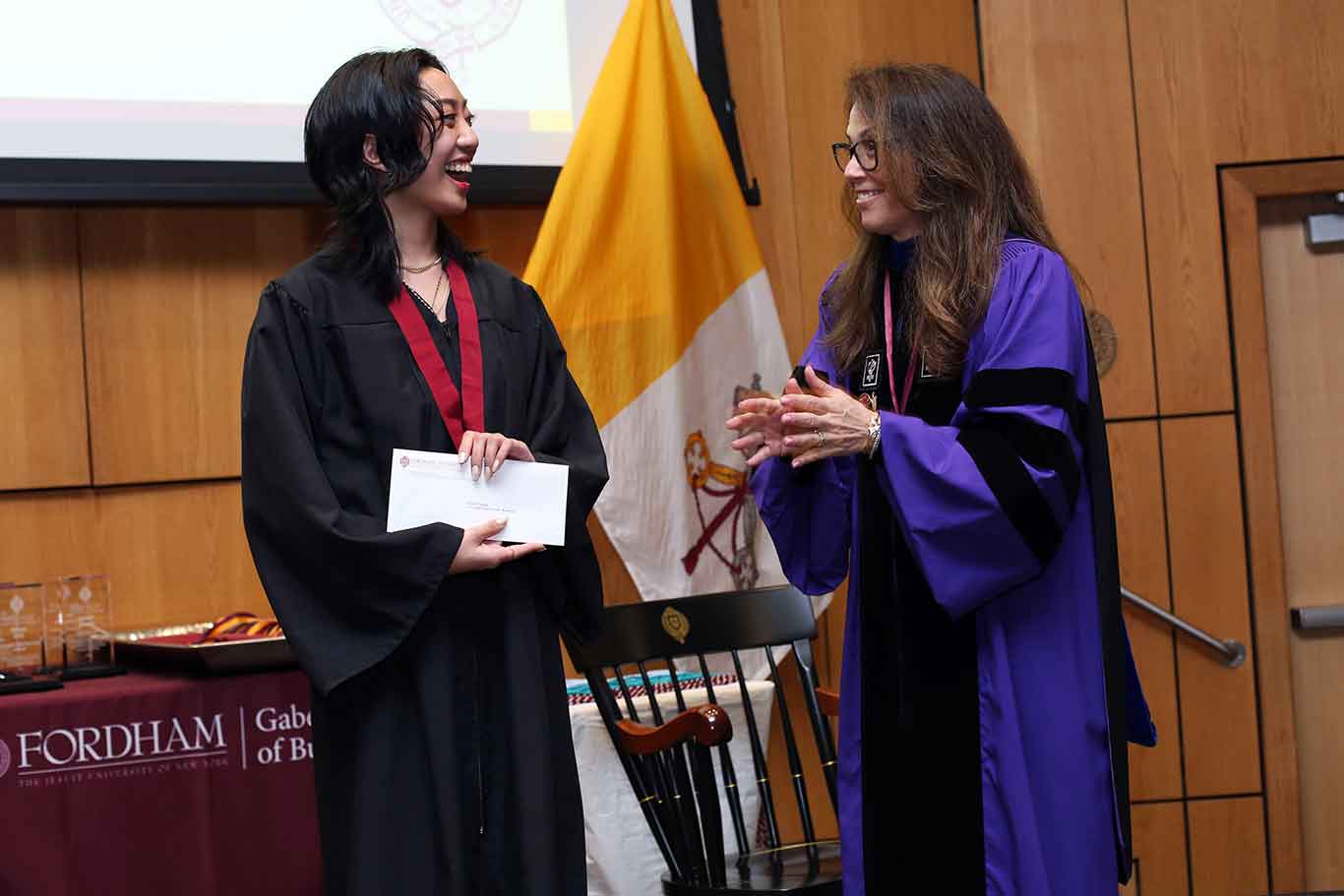 Kaitlin Cunanan, who was honored for her thesis “Connecting during COVID-19: Exploring Relational Cohesion Theory and Personality within Digital Environment of COVID-19.”

“For me, a kid that grew up in a fishing village in Singapore in a family that didn’t speak any English and barely even wrote in Chinese, having any job after graduation was a dream,” he said.

“Most would agree that to achieve success, you need to be hungry, driven, and willing to work hard. Most of you who are here today likely have those traits. That’s why you’re at Fordham. But today I want to add one more factor for you to consider, and that is that relationships matter.” 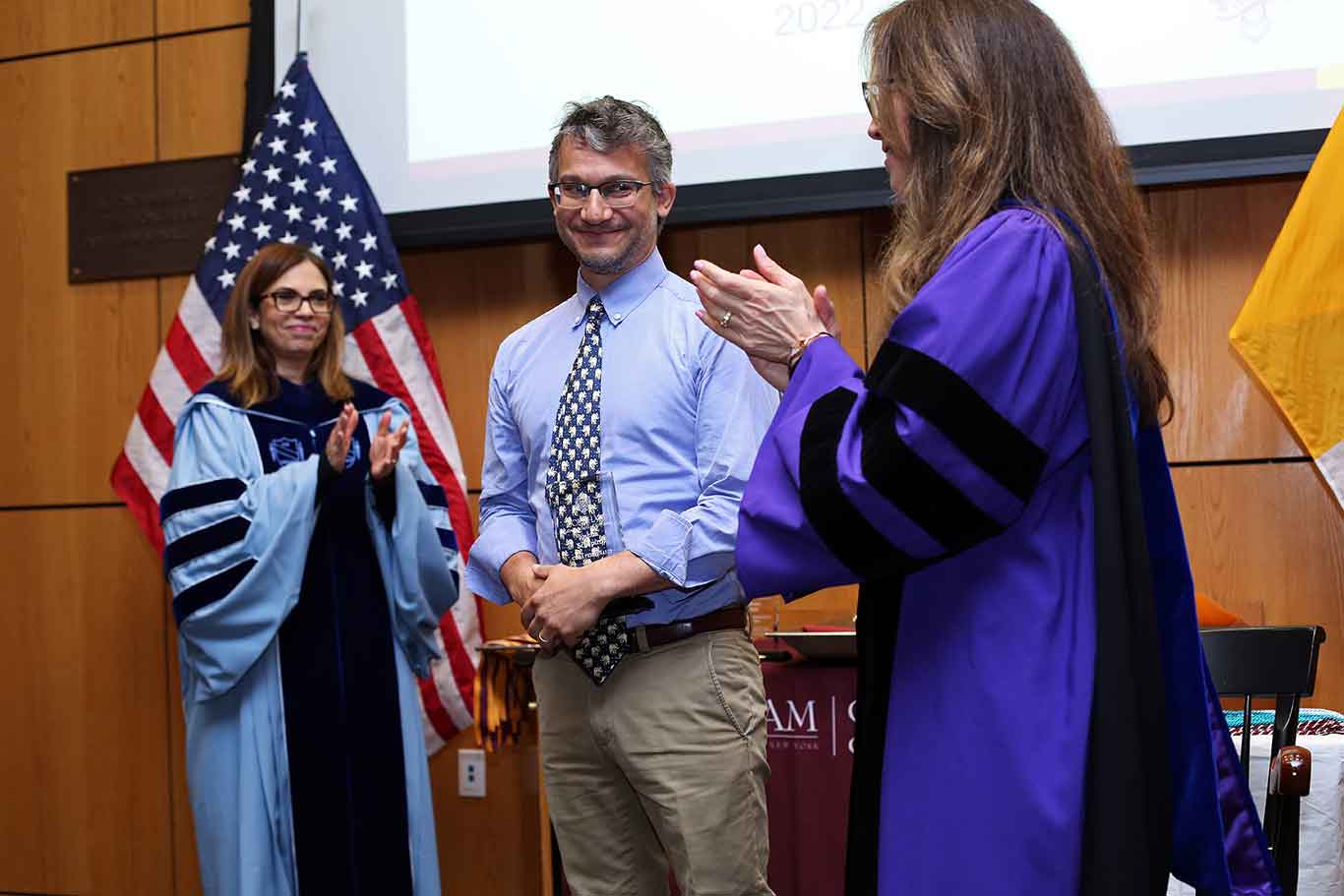 Joshua Schapiro, who was one of two professors awarded the Faculty Personalis Award

Although he has found success in the banking world, Goh said that when he graduated in 2013, he had no prospects, and as an international student, he had a visa that would expire if he didn’t find employment. Fortunately, a friend from Fordham who was a junior intern at JPMorgan Chase connected him to his manager in July and landed him a job there. Time and time again, he said, it was someone from Fordham that extended a helping hand and got him in front of the right people.

“More importantly, your ability to empathize, your ability to put yourself in someone else’s shoes, and your ability to relate to someone else allows you to build real and lasting relationships, whether it is with your friends, your co-workers, or your family. Those are some of the intangible things that I learned in my four years at Fordham, that I now know are a big part of the reason why I’m here today in front of you.” 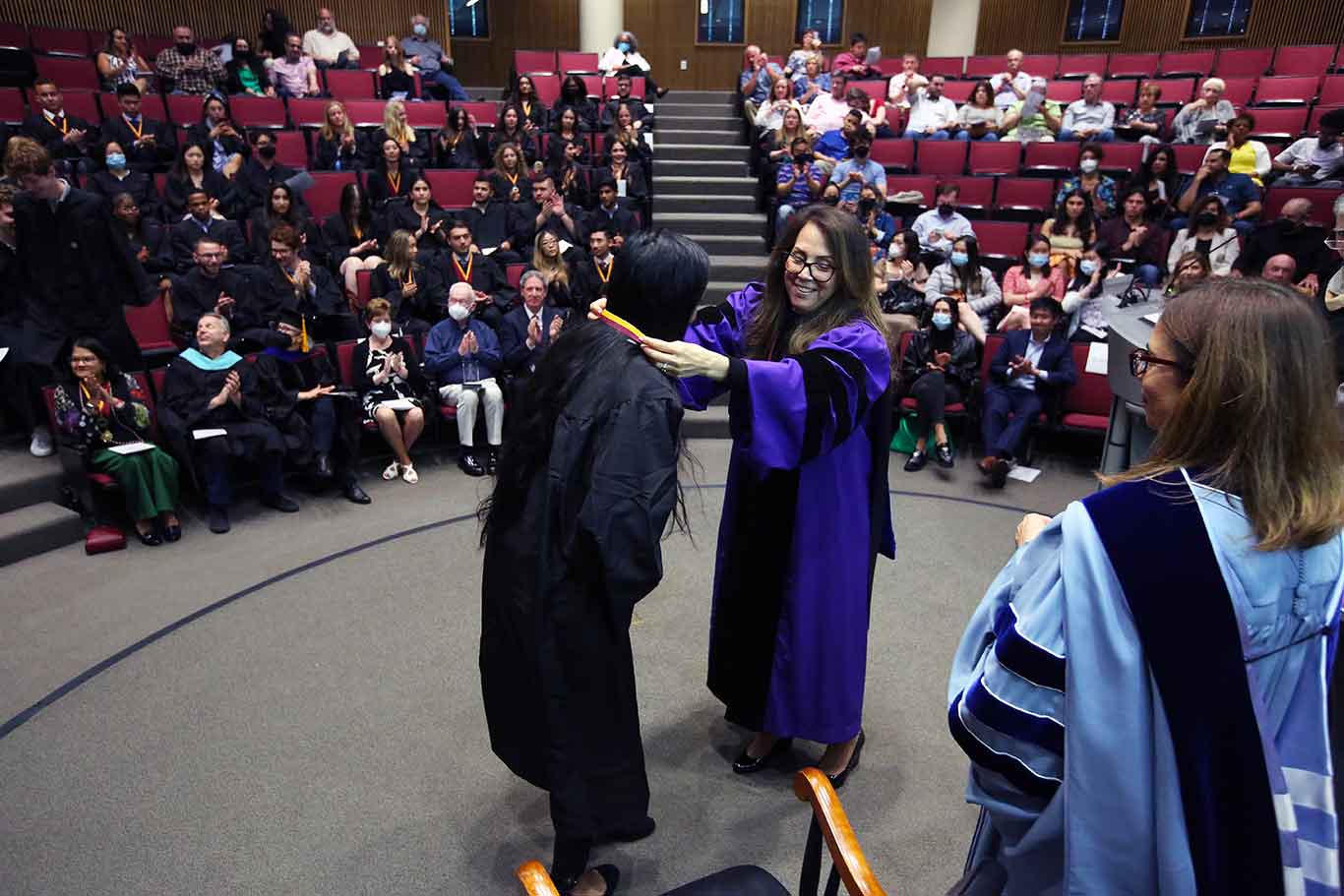 The event was the first in-person gathering of the awards in three years.