skip to main content
Return to Fordham University
You are at:Home»Commencement»Commencement 2022»A Graduate Who Overcame a Car Accident That Changed His Life
Davis Bigelow at Fordham’s 2022 Commencement. Main photo by Argenis Apolinario; other photos courtesy of Bigelow
Davis Bigelow was one year away from graduating from Fordham when he became paralyzed in a car accident.

On July 19, 2018, Bigelow was driving around his hometown of Easton, Connecticut, with two friends before heading back to school. The driver, who was intoxicated, accidentally crashed the vehicle. The driver and another passenger were mostly uninjured, but Bigelow could no longer walk on his own. 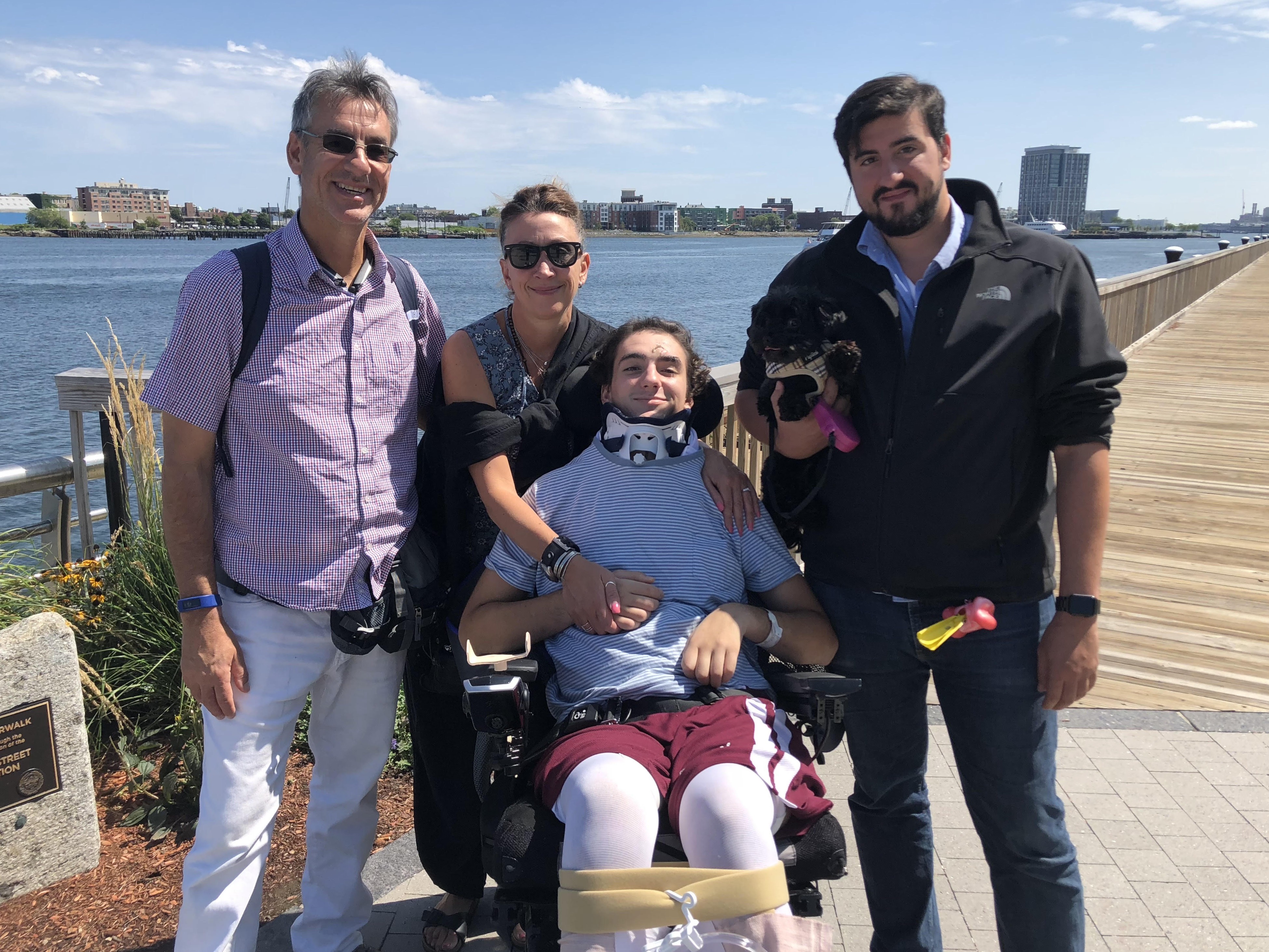 Davis with his family after the accident

A neck fracture had paralyzed Bigelow from the chest down and limited his arm and hand movement. After the accident, he underwent emergency spinal surgery at Yale University Hospital in New Haven, where doctors tried to repair his vertebrae. He spent the next few weeks in the surgical intensive care unit, where he required a ventilator, tracheotomy, and feeding tube. Once he was stabilized, Bigelow was transferred to Spaulding Rehabilitation Hospital in Boston, a facility with a special spinal cord center that could provide the care he needed.

Over the next four years, he underwent multiple surgeries, physical rehabilitation, and therapy to try to recover his mobility. His parents also moved from their Connecticut home to a wheelchair-accessible apartment in Boston, where they could better support their son.

It was a miracle that Bigelow had survived the car crash, especially without any brain injuries, said his family. But his life would never be the same. 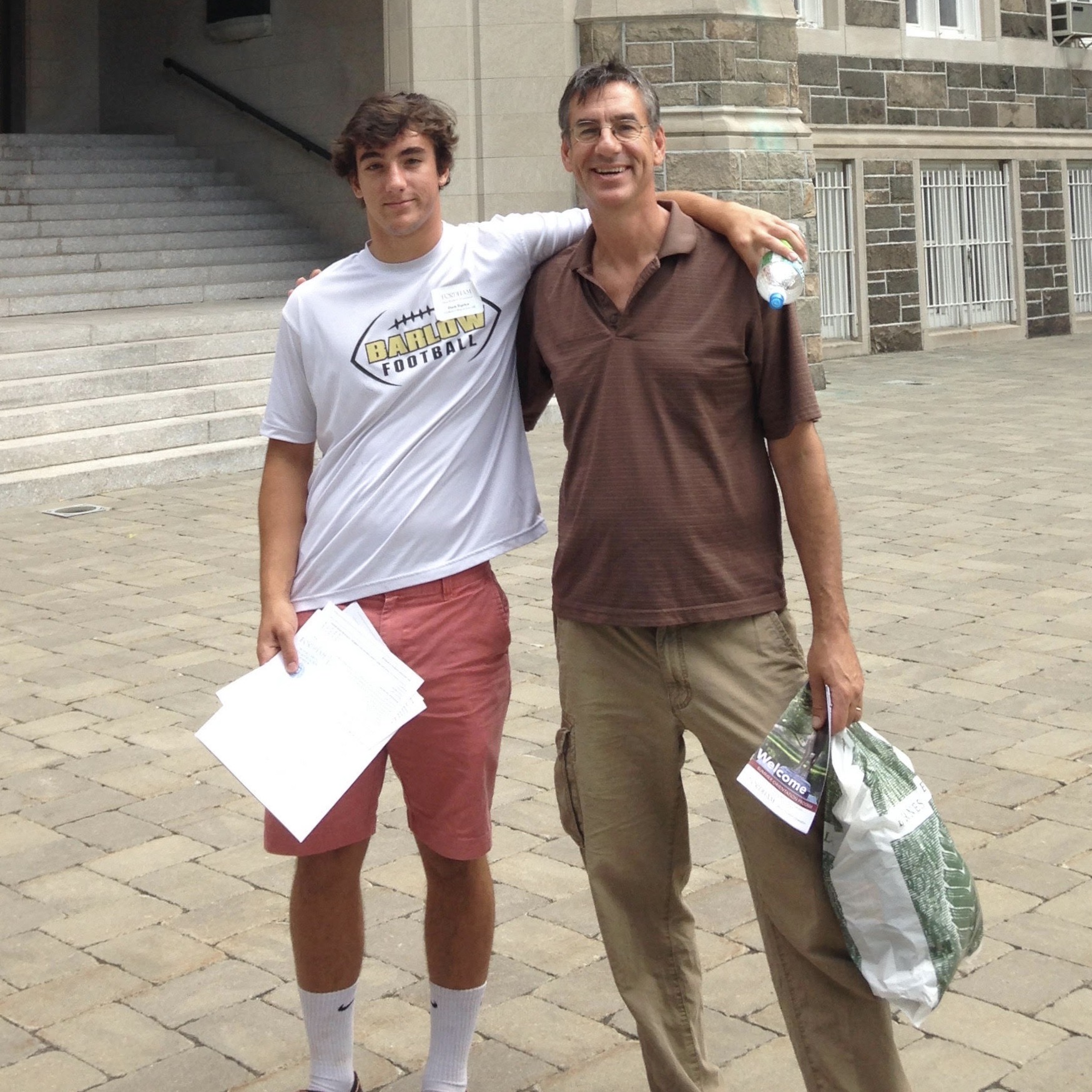 Davis with his father at his 2015 Fordham summer orientation

“Before the accident, I was the most independent I had ever been. I had moved out of my childhood home, I was living on my own. Then I moved to a new state and was taken away from my friends and hometown,” said Bigelow. “Everything, from going to the bathroom to sexual function, also changed. I wasn’t able to properly feed myself, get out of bed, get dressed, or bathe.”

His final year at Fordham stretched into a three-year-long hiatus. He could no longer play club lacrosse or continue his summer job as a tram driver at the nearby New York Botanical Garden. He was also unable to graduate with his classmates in 2019.

The accident changed everything, but it also gave him a new perspective on life, he said.

“It gives you perspective on everything you once took for granted and what you used to consider difficult,” he said. “It really made me appreciate my family and the relationships I’ve built in my life.”

Returning to Fordham: ‘It Feels and Looks Like Home’

After becoming more accustomed to life with his disability, Bigelow returned to Fordham College at Rose Hill in fall of 2020. He took advantage of the online courses offered during the pandemic and learned how to complete his schoolwork alongside his disability. Instead of using a computer and keyboard to type papers, he used voice dictation on an iPad Pro. His advisers at Fordham also pitched in. 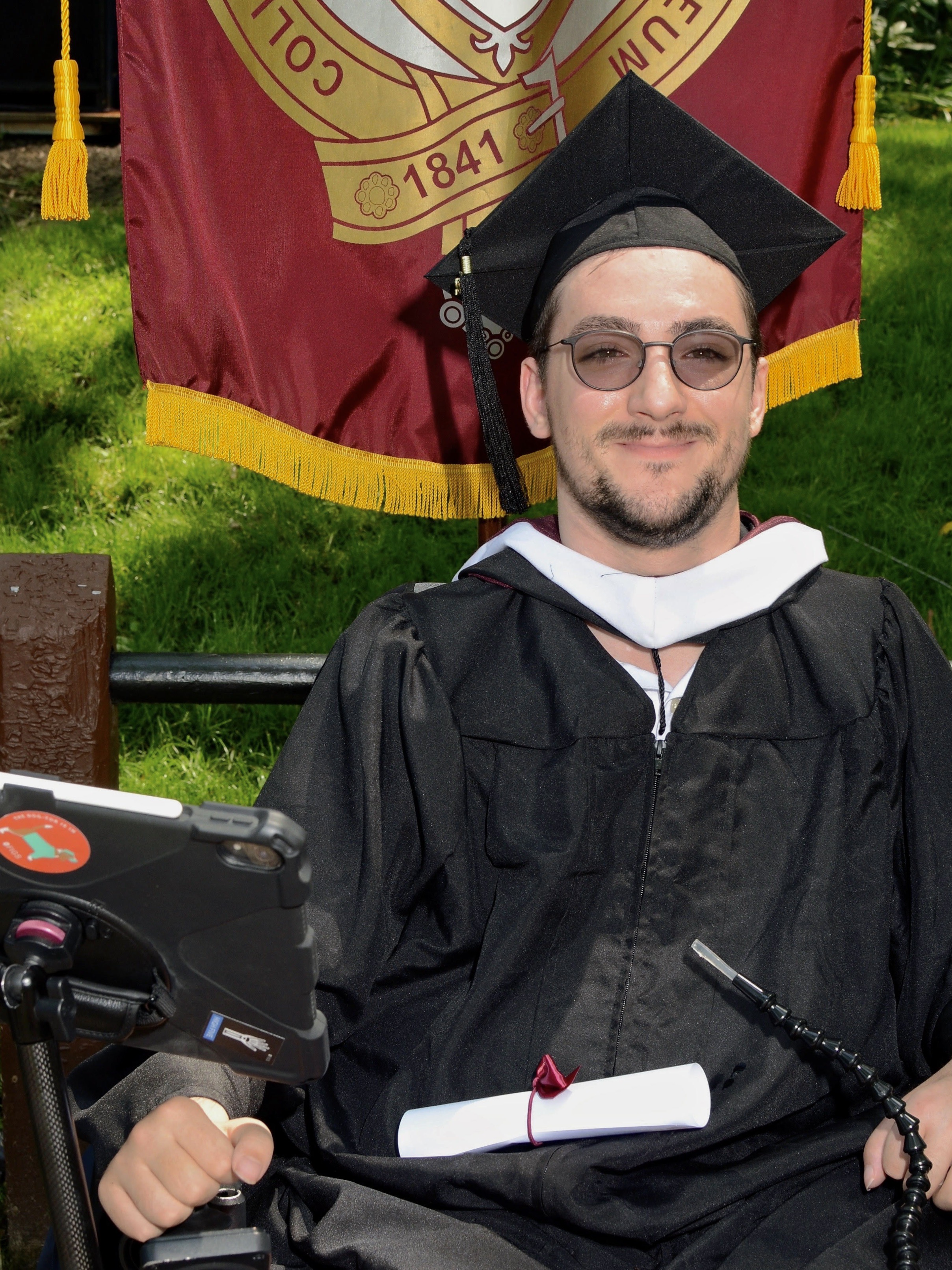 Davis at the 2022 Commencement

“The Office of Disability Services made test-taking, scheduling, and note-taking as simple as possible,” he said, giving a special shout-out to the office director, Mary Byrnes.

Bigelow said he was concerned that his disability would cause him to fall behind his able-bodied classmates, but he proved himself wrong.

“I was really worried that because of my injury and not feeling like I could always do everything as easily as my classmates, that I would fall behind and lose out on those honors that I was proud of,” said Bigelow, who received a Loyola Scholarship, a renewable scholarship that requires a minimum cumulative GPA of 3.00, as an incoming first-year student. “But I finished my degree and maintained at least a 3.00 GPA.”

The last time he stepped foot on campus was nearly four years ago, before his accident. On May 21, 2022, he returned to Rose Hill to receive his bachelor’s degree in economics at Commencement.

Bigelow said that his friends and family asked him if the campus looked different. “No,” said Bigelow, who had lived in Loschert Hall and off-campus apartments in the Bronx. “It feels and looks like home.”

‘I Can Do Those Things—Just in a Different Way’

Bigelow now lives in Marina Bay, a Boston neighborhood lined with restaurants and boats. He and his girlfriend live in a two-bedroom apartment with their four-month-old kitten, Batman. 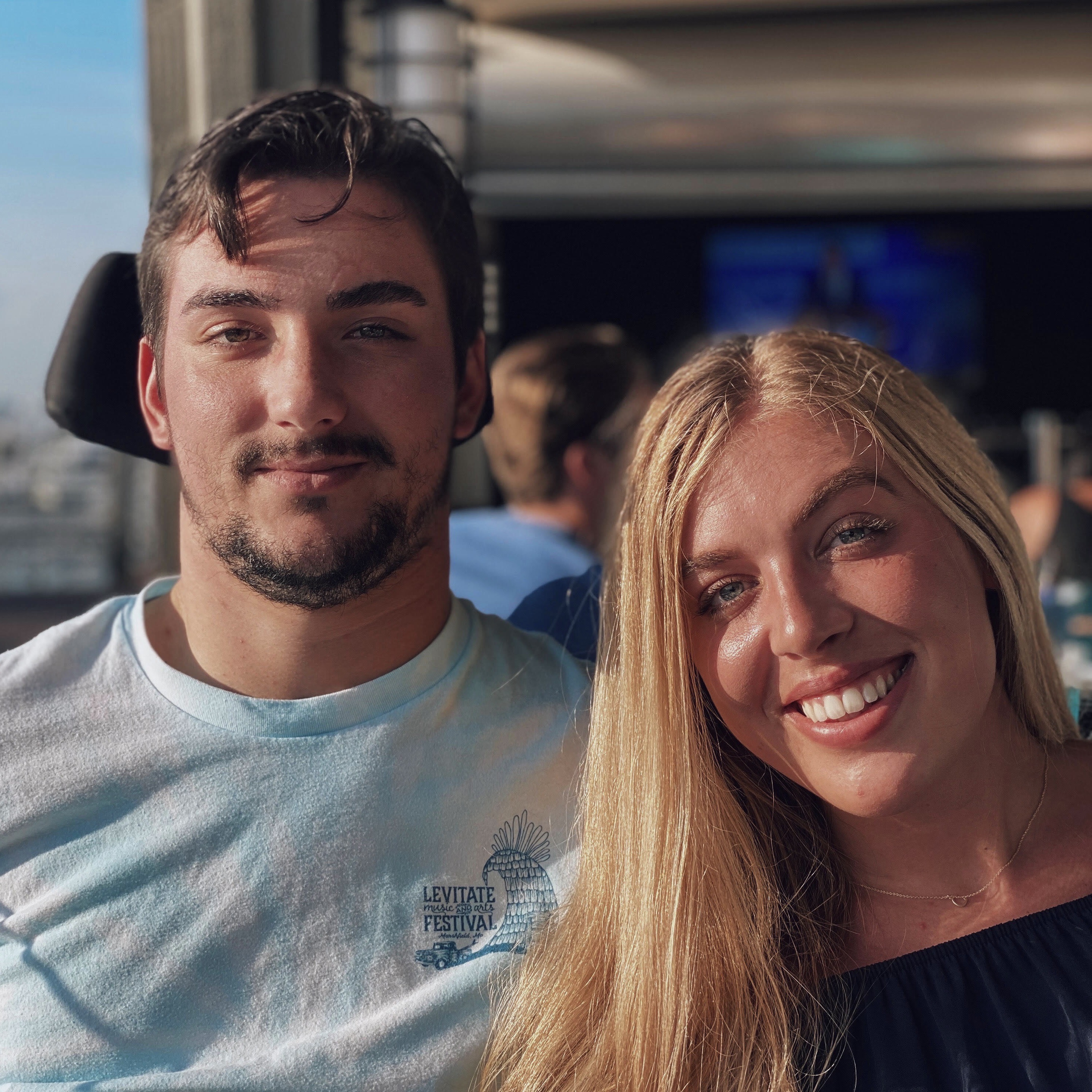 Davis and his girlfriend

In the future, he sees himself working remotely in a senior data analytics position in the banking, finance, or insurance industries. He said he wants to continue exercising regularly at his local YMCA and enjoying life in Boston, particularly the theater district.

After years of therapy, Bigelow is able to grasp objects, although he can’t hold onto them for a long time. He can brush his hair and teeth and use a stylus for his iPad Pro, which has become an essential tool in his daily life. But he still deals with chronic pain and fatigue everyday.

Bigelow said his doctors have told him that most mobility returns within two years of an injury. But instead of focusing on what he might be able to do, he said he tries to focus on what he can do.