skip to main content
Return to Fordham University
You are at:Home»Commencement»Commencement 2019»Humor and Reflection at 2019 Encaenia
Photos by Bruce Gilbert
Good-natured quips, memories, and a sobering talk on climate change set the scene at Fordham College at Rose Hill’s annual Encaenia ceremony, held at the Rose Hill Gym on May 16.

Erin Kiernan, an English and film and television student who opened for Saturday Night Live comedians Alex Moffat and Mikey Day this past Spring Weekend, was the 2019 Lady of the Manor. In a monologue that mixed nostalgia with good humor, she poked fun at her home for the past four years.

“We entered Fordham with countless questions: Will I make friends? Will I find my passion? Is my roommate bringing the mini fridge, or am I? When will Edward’s Parade occur?” Kiernan joked. 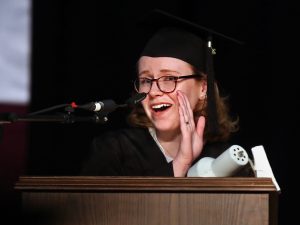 2019 Lady of the Manor Erin Kiernan

“As we move into the next stages of our lives, we’re faced with even bigger questions: Will I get a job? What is my purpose? How do you pronounce Cunniffe House? Is the small building next to Freeman a seismic station or a tomb? Where did all the cats come from? What is the Calder Center for, except shutting down for a week every time there’s a rumor of snow?” she continued, to laughter so frequent it seemed like a laugh track.

At the end of her playful satire, she tempered her tone to one of gratitude. Kiernan listed a string of things she was grateful for at Fordham. Among them were the sunny days on Eddies and GO! (Global Outreach) trips.

“Thank you for turning me into the woman I’ve always wanted to be. And most of all, thank you for not having an application fee or requiring a supplementary essay,” Kiernan said, as her classmates cheered.

Valedictorian Robin Happel, an environmental studies major and the daughter of field biologists, steered the night’s speeches toward a tougher topic—climate change.

But before doing so, she acknowledged two young women who should’ve been at the ceremony that evening.

“I would also like to take a moment to acknowledge Donika Celaj and Sydney Monfries, two members of our class who tragically could not be with us,” Happel said. “May their memories be a blessing.”

She then delivered a personal reflection on the climate change crisis. For three consecutive years, Happel and her friends faced natural disasters that were worsened by the effects of climate change. The fall of her sophomore year, her close friends from California were forced to drive through wildfire flames that encircled—and eventually destroyed—their homes. A year later, her roommate’s hometown flooded during Hurricane Harvey. And last fall, Happel’s own family home flooded during Hurricane Florence. 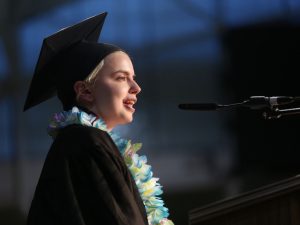 She urged the audience to not only celebrate her classmates’ four years of achievements but to also focus on what they need to achieve in the next 11.

“That’s how long climate scientists have given us—11 years to avoid catastrophic climate change,” Happel said. “It’s already damaging our homes, our health, our safety, and our happiness. We won’t let it take our futures, too.”

It’s more than possible at Fordham, she said. The University already has solar panels that help provide low-cost power to its neighbors in the Bronx. It’s home to the fair trade start-up Spes Nova and other student clubs that aid the less fortunate. And it’s created a global alumni network that now includes the Class of 2019, she said—the class of “zero emissions, zero excuses, and zero time to waste.”

“I challenge you tonight to see yourself as placed here for a purpose. Whatever that purpose is, I hope that—win or lose—you pursue it. Because you are free, free someone else. Because you are alive in this moment, do more than simply step aside. Because we are the class of zero, and we have zero time to waste,” Happel said, to a standing ovation from her peers and other audience members.

More Fordham College at Rose Hill students were recognized for being inducted into top academic honor societies and winning prestigious awards, fellowships, and scholarships over the past four years.

There were two special awards, whose winners—unlike the rest—were a surprise.

The Claver Award, given from the Jesuits of Fordham to a senior who epitomizes the University’s commitment to community service, was bestowed on Katarina Martucci, a senior who met weekly with an immigrant child living alone in the United States, and then accompanied the child to court as a child advocate with the Young Center for Immigrant Children’s Rights. The Fordham College Alumni Association Award, given to a senior who exemplifies the Fordham spirit, was presented to Charlotte Hakikson, a senior who served the campus community in more than six roles at Fordham, including vice president for ASILI: the Black Student Alliance.

At the end of the night, Maura Mast, Ph.D., dean of Fordham College at Rose Hill, addressed the graduating class of 2019. She encouraged them to find God in all things—including the bad and the ugly—with a simple approach used to cross a street: stop, look, and go. When you stop, you take a break from the chaos of reality and begin “to see clearly,” she said. When you “look” and become more aware of the reality around you, you can develop a deeper, more receptive attitude. And when you “go,” you engage with the world based on what you have learned from stopping and looking.

“Weave attention, reverence, and devotion into your life,” she said. “And when you do that, when you practice that, your eyes will open, your heart will open, and you will find God in all things.”

Mast also described the students as her “classmates.” Like the students sitting before her, Mast said, she was also new to Fordham in August 2015. She learned the hard way that she “couldn’t get on the red trains bound for Grand Central” at Fordham’s Metro-North station. It took her three years to find Pugsley’s, thanks to the aid of Google Maps.

But the last four years, no matter the train or on-campus Wi-Fi issues, were transformative for all—and the years ahead will be, too.

“Your education doesn’t stop on Saturday,” Mast said. “I expect you to continue learning and growing as you reflect on your Fordham experience throughout your life.”