skip to main content
Return to Fordham University
You are at:Home»University News»Fordham Expands Solar Power Use
The solar array on top of the garage is comprised of 2,790 individual solar panels and is the second one to be installed on the Rose Hill campus.

As part of a continuing commitment to reduce its carbon footprint, Fordham has increased its sustainable energy sources with the use of on- and off-campus solar arrays.

A 963-kilowatt solar panel array was recently installed atop the five-story parking garage on Fordham’s Rose Hill campus and is expected to be operational in April, thus dramatically increasing the University’s embrace of renewable energy. 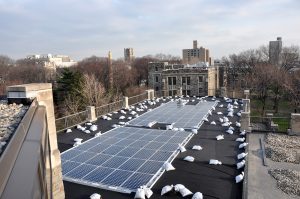 In 2010, a 25-kilowatt solar array was installed on the roof of the William D. Walsh Family Library, Rose Hill’s most energy-intensive building.

The array, which comprises 2,790 individual solar panels, is the second to be installed at Rose Hill and will generate electricity for use throughout the campus. In 2010, 84 panels were installed on the roof of William D. Walsh Family Library; they generate 25 kilowatts for the library, Rose Hill’s most energy-intensive building.

The University has also begun drawing renewable energy from off-site sources, including the largest solar-power system in New York City to date. In July, Fordham signed a 20-year agreement with the solar developer EnterSolar to purchase electricity generated at a 10-acre, 9,000 solar panel installation just east of the Arthur Kill waterway in Staten Island. It will generate up to 2.6 megawatts of solar power annually, which will be credited to Fordham’s energy usage.

A Greener Source of Energy

A 9,000 solar panel installation in Staten Island will generate up to 2.6 megawatts of solar power annually that will be credited to Fordham’s energy usage. Photo courtesy of Enter Solar.

Marco A. Valera, vice president of facilities management and sustainability at Fordham, said that the new power sources can provide over 20 percent of the total electric consumption at the university when operating at maximum production. It makes Fordham the largest consumer of locally installed solar capacity of any college in New York City and goes a long way toward cutting the University’s carbon output.

In 2007, Fordham accepted the New York City Carbon Challenge and committed to reducing its greenhouse gas emissions by 30 percent. In the fall of 2017, the University extended its commitment to the challenge by pledging a 40 percent reduction by 2030.

In addition to cutting back on carbon emissions, the combined off- and on-site arrays will result in approximately $200,000 annual savings for Fordham for 20 years.

“This is a terrific initiative for the University, as we achieve budget savings over the term of the 20-year contract at the same time that we significantly reduce our greenhouse gas emission profile,” he said.

“Sustainability ties into Jesuit beliefs and practices. It’s good for the environment, and in this case, it is good for us financially. It’s a win-win.”

Julie Milea, FCRH ’17, EnterSolar’s engineer for the Rose Hill project, added that solar power is not only cost-effective but an efficient use of green or renewable power. It draws the most power during peak daylight hours, exactly when there is the most electric use in buildings.

Valera said that the cost of solar panels has recently become more economically feasible, but that tax breaks and grants from federal and state governments on renewable energy sources still play a big role in making them affordable, especially in northern parts of the country where solar hours are limited.

The University is also pursuing other sites for additional solar arrays, including a 8-kilowatt array that will be installed on the roof of Campbell Hall later this year and partly funded by Fordham graduates.