skip to main content
Return to Fordham University
You are at:Home»Business and Economics»With Scholarship Gifts, Alumnus Brings Friends Along for the Ride
Kawa was so moved at the naming ceremony held in his honor in 2015, he led the assembled crowd in a second singing of the Fordham fight song. Photo by Bruce Gilbert
The year 1961 was a very good one for Jack Kawa.

That was the year that Kawa, GABELLI ’65, moved into Queen’s Court on the Rose Hill campus. There, he met Patrick Rogers, Joseph Furfaro, Frank Ferro, and Quentin Lauer II, all of whom would graduate with him four years later from the Gabelli School of Business.

Fifty-eight years later, Kawa is paving the way for future students to follow in their footsteps. After making a $1.5 million gift in 2014 to support the information and media technology center at Hughes Hall, the Rose Hill home to the Gabelli School, Kawa funded a scholarship for Gabelli School undergraduates with a $150,000 gift. At a 2015 ceremony during Kawa’s 50th anniversary Jubilee in which the center was named for him, he beseeched his classmates to follow his example. 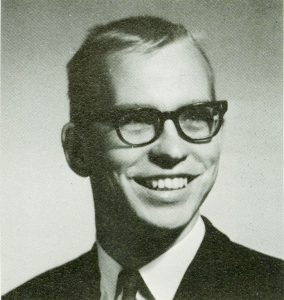 Kawa in the 1965 edition of the Fordham yearbook Maroon

“I said, ‘I want to do one every year, for as long as God lets me live.’ And Father McShane said, I’m going to say a prayer right now that you live a very long life, Jack,’” he recalled, laughing.

Kawa has lived up to his vow; since the initial scholarship he created, he has funded four more for Gabelli School students. He’s added a twist though: These scholarships bear both his name and those of Rogers, Furfaro, Ferro, and Lauer.

In creating the scholarships, Kawa, a resident of Knoxville, Tennessee, who made his career as a stock analyst specializing in transportation companies, said he wanted to celebrate the lifelong friendships he witnessed and inspire others to honor their friends in the same way.

“Although I like to see my name in print, if you see your name five to 10 times in a row for a scholarship, it’s a little much,” he said. “I thought, why not highlight some of the students who made Fordham what it is today?”

Donna Rapaccioli, Ph.D., dean of the Gabelli School, said gifts like Kawa’s are at the heart of the school’s drive to be a center for “business with purpose,” particularly as it prepares to celebrate its centennial anniversary in 2020 and as the close of University’s Faith & Hope | The Campaign for Financial Aid draws near.

“Scholarships provide an essential opportunity to create diversity of thought in our classroom,” she said. “Jack’s generosity is unique in that it honors others, and it’s also significant that he’s targeted it toward scholarships, which are essential for us to attract and retain a talented student body.”

Although he was close to Rogers and they stayed friends after graduation, Kawa said he didn’t have a lot of time for socializing on campus. He worked during his junior year at the library, and in his senior year he manned gas pumps along the Major Deegan Expressway from 8 p.m. to midnight.

“That took me out of a lot of campus activities. If I look back at it again, I wouldn’t have done that. I should have stayed on campus, and participated more. But that’s the past,” he said. 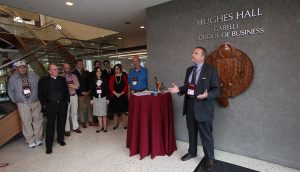 “If you see your name five to 10 times in a row for a scholarship, it’s a little much,” Kawa said. “I thought, why not highlight some of the students who made Fordham what it is today?”

Rogers, who roomed with Kawa his first year and a half at Fordham and still talks over the phone with him daily, said it was poignant to be named in a scholarship as he himself benefited from one.

“I don’t really care about the immortalization; I’m not going to be around to see it, and that’s OK. I just think that that this is something other people might have never thought of, and they might think, ‘That’s something I could do,’” he said.

It’s also fitting that Ferro and Collins are named in the scholarships, Rogers said, as he vividly recalls he and Kawa facing off against them in bridge games over the years.

“I still play today. My doctor tells me it’s a way to keep my mind sharp. One of my fondest memories is me and Jack together, playing bridge,” Rogers said.

For Ferro, Kawa’s idea was a surprise. Although he remembers the bridge games and playing with Kawa on a club football team that nearly beat the upper-class team in a game on Edwards Parade their first year, he said Kawa had drifted away from the campus social scene by senior year. He’d heard Kawa was funding scholarships, but didn’t give it much thought.

When Kawa said he wanted to honor Collins, Ferro said he was extremely touched. Ferro and Collins were roommates for four years, and Collins would have been the best man in his wedding had he not been drafted for service in the Vietnam War. He died recently of brain cancer. “He still appears in my dreams regularly,” Ferro said.

“My senior year, the apartment we shared on 193rd Street and Webster Ave was a social center of the university. We threw parties that started at 6:30 and ended at 6:30. It was just astonishing, and Collins was a big part of that. So, it was a good gesture on Jack’s part,” he said.

Furfaro was closer to Kawa, and had him in his wedding party in 1965. He too was touched when Kawa said he wanted to dedicate a scholarship to Joseph Sutera, who’d been Furfaro’s best man in his wedding. Sutera died suddenly on a business trip when he was just 50.

“I had lunch with Joe’s widow, and she was just so touched that Joe’s classmates would remember him. Jack touched the hearts of the whole Sutera family by making this in memory of Joe,” he said. “Joe’s daughter is my goddaughter. So there all of these connections, connections, connections. I think it just brings more of the Fordham family into the picture.”

Furfaro recalled that at the 2015 Jubilee, Joseph M. McShane, S.J., president of Fordham, told them that their story is “the Fordham story.” He also made a small contribution to the scholarship, to show his support.

“What Jack is doing is enhancing the Fordham story amongst all of his classmates,” Furfaro said.

Like Ferro, Lauer wasn’t the closest to Kawa. But he noted that back then, commuter students outnumbered residential students, so there was a natural bond between those who lived on campus. Rich Kelly, who he lived with for four years and who is honored on the scholarship with Lauer’s name, was from Jamaica, and when Lauer and his wife honeymooned there, Rich and his family arranged everything for their visit, he said.

Although Kawa, who retired as senior vice president of Dean Witter Reynolds in 1997, said he regrets not spending more time on campus, he said the education he received set him on a path to an extremely successful career.

“I was a bear with numbers. What I learned in accounting was invaluable for what I did on Wall Street,” he said.

Jamie Wang, a junior majoring in accounting, is the first recipient of the first scholarship that Kawa created. In a letter she wrote thanking Kawa, Wang, who transferred from Baruch College in 2017, noted that her mother had pressed her to consider transferring to a public college rather than Fordham.

“This scholarship, as well as my hard work I’ve put in since transferring, has convinced her to allow me to continue my education in my dream school and work towards a degree in my desired career,” she said.

“I want to thank you for your generous contribution. It has made it possible for me to continue my education here at Fordham.”

Stories like Wang’s are what inspire Kawa to give.

“Fordham is number one on my hit parade, and I like the scholarship idea, because you’re giving money to kids who couldn’t theoretically go without any financial help. In addition, the scholarships that can be set up to honor classmates and their friendships will last forever.”