skip to main content
Return to Fordham University
You are at:Home»Campus Locations»Rose Hill»Time Traveling at Jubilee

This year’s Jubilee Weekend welcomed nearly 2,000 alumni and friends back to the Rose Hill campus. More than $25 million was raised and class gifts will continue to be accepted through June 30. 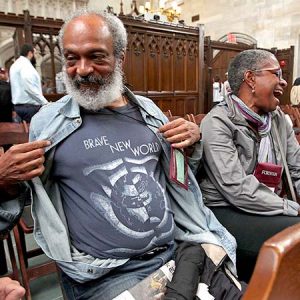 Michael Mitchell displays a t-shirt his wife Ina gave him that holds a special Fordham connection.
(Photo by Bruce Gilbert)

On June 6, Joseph M. McShane, SJ, president of Fordham, welcomed alumni back to the Rose Hill campus for Jubilee weekend.

On hand were Michael Mitchell, PhD, FCRH ’65, and his wife Ina, to celebrate Michael’s becoming a Golden Ram.

After Father McShane’s welcoming address, Ina prompted Michael to tell the story of when he decided to come to Fordham. As he told his tale, Michael slowly unbuttoned a denim shirt to reveal a faded T-shirt emblazoned with the cover art from Aldous Huxley’s 1932 novel, Brave New World.

Fifty years ago, Mitchell said, he sat on a bench gazing at the campus, contemplating whether he’d like to attend Fordham. He had yet to sign on the dotted line, when a Jesuit approached and asked him what he was reading.

“What’s the message?” the Jesuit asked. 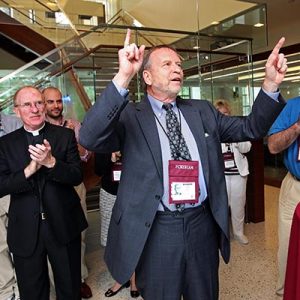 Jack Kawa, from the class of 1965, celebrates dedicating the media room at Gabelli School of Business by leading the crowd in two rounds of The Ram Fight Song. (Photo by Bruce Gilbert)

“Not, ‘What’s it about?’ he asked me, ‘What’s the message?’ No one had ever asked me that, not in high school, not ever,” recalled Mitchell.

He attempted an answer that he assumed would mollify the priest.

“It’s about the soul of man,” he said grandly.

The Jesuit continued, “What do you mean by that?”

“I said, ‘It’s about tradition and modernity,’ but that wasn’t enough. He kept probing me and pressing me for more answers until finally he said, ‘Keep reading.’ Then he left.”

Mitchell did decide to attend Fordham. He was one of very few African Americans to do so in that year, 1965. He went on to get his doctorate in political science and now teaches at the University of Arizona.

He quoted Father McShane’s welcoming address to describe the way that he teaches his students today: “to think critically, read analytically, write persuasively, and speak eloquently.” 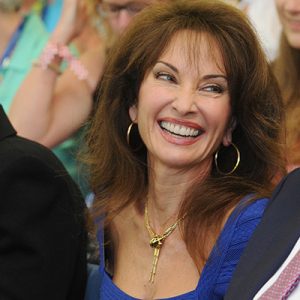 Susan Lucci, from the Class of 1968, praised the women of Marymount College who “paved the road” and were “ahead of their time.” (Photo by Chris Taggart)

“My Fordham education gave me tools that I didn’t appreciate until long after I left,” he said. “They taught me how to think.”

On returning to the campus after so many years, Shotwell said he felt like a “deer in headlights” with all the new buildings and physical changes.

Liz Fitzgerald, FCRH ’85, said that the new Starbucks on Fordham Road took her by surprise more than anything else. She and fellow classmates said that positive changes just off campus were as welcome a sight as any improvements on the campus itself—a sign that the dangerous days of the Bronx are fading.

Still, Joe Moorhead, FCRH ’96, head coach of Fordham Football, told a crowd of alumni at the Gabelli School of Business that he constantly reminds his players that disparities in the Bronx remain.

“There are people two blocks from this campus who don’t know where they’re going to put their head at night, and we make sure our players know that,” said Moorhead, adding that last season the football team logged in more than 500 hours of community service.

Although Rosemary Carr, MC ’60, appreciated the beauty inside of University Church, she noted that the University Church and Rose Hill are not stored in Marymount alumnae’s memory banks. The Fordham Marymount campus, sold seven years ago, was in Tarrytown. 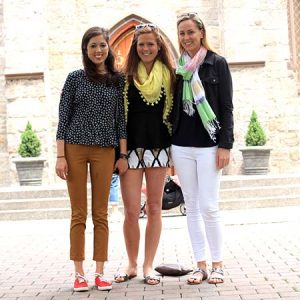 Members of the Class of 2010 outside of University Church. (Photo by Tom Stoelker)

Instead, her memories included nuns in full habit that taught elocution, conservative dress, and modest behavior to her and her and classmates.

As Carr spoke, three stylish young women in skirts and jeans from the Class of 2010 slipped into the last pew, knelt, made the sign of the cross, and prayed.

One of the girls, Bridget Murphy, FCRH ’10, said returning to the campus five years after graduating made her feel like time stands still.

“You come back here and it’s exactly the same.”