skip to main content
Return to Fordham University
You are at:Home»Arts and Culture»Painting from Fordham Archives Spotlighted at the Met
Cristóbal de Villalpando’s painting “Adoration of the Magi,” which ordinarily hangs in the Office of the President, is now temporarily on display at the Metropolitan Museum of Art.

When visitors to the Metropolitan Museum of Art take in Cristóbal de Villalpando: Mexican Painter of the Baroque, a new exhibition opening on July 25, one of the pieces they’ll see for the first time is the Adoration of the Magi.

For a little over a century, the painting has only been seen by visitors to Fordham’s Office of the President in Cunniffe House. The 1683 painting depicts a scene from the Gospel of Matthew when kings, or magi, visited the infant Jesus. It was given to Fordham shortly after the University’s founding and first put on display in 1900.

(ABOVE) Metropolitan Museum of Art conservator Dorothy Mahon touches up Cristóbal de Villalpando’s Adoration of the Magi
Since last October, it has been undergoing a restoration at the museum. It is one of the show’s featured pieces.

Villalpando, who lived from 1649 to 1714, emerged in the 1680s as a leading painter in viceregal Mexico and one of the most innovative and accomplished artists in the Spanish art world. The Adoration of the Magi, which was based on an early-17th-century engraving of the same title by Peter Paul Rubens, is being touted as one of the highlights of the show along with Moses and the Brazen Serpent and the Transfiguration of Jesus, a 28-foot-tall canvas that he painted in 1683.

Ronda Kasl, curator of Latin American Art in the American Wing at The Met, said Adoration of the Magi is significant because it reveals Villalpando’s capacity to envision the divine.

“The subject itself is fundamentally concerned with the revelation of divinity. The holy child’s humanity is manifest in his nakedness, while his divinity (and his mother’s) is revealed in the illumination of their idealized features,” she said.

The painting had hung at the Rose Hill campus for nearly a century before Barbara Mundy, Ph.D., professor of art history and Latin American and Latino Studies, stumbled upon a mention of it in 2001 in the University’s archives while researching four other paintings.

“I couldn’t believe it, because Villalpando is an immensely important Mexican painter. He’s like the Michelangelo of Mexico in the 17th century,” she said.

“I almost hit the floor when I first I saw the painting.”

Because of its size, (78 inches wide and 99 inches high), it has been Met conservator Dorothy Mahon’s primary focus for the past 10 months. Mahon noted that over the years, the varnish coating the painting had become discolored and needed to be delicately removed and replaced. The backing holding the canvas taut needed to be replaced as well.

“It’s a big picture, so it had lots of varnish and lots of discoloration,” she said, noting that every step of the restoration is painstakingly done by hand with custom-made tools and adhesives. As part of the restoration process, Mahon traveled to Mexico to see in-person other examples of Villalpando’s works from that same period.

At a July 24 press preview at the Met, Diego Gómez Pickering, Consul General of Mexico in New York, said the timing of the exhibit could not come at a better time for the estimated one million Mexican Americans living in the New York Metropolitan area. who, like Villalpando, primarily hail from the state of Puebla.

“The Hispanic community is a founding community of this country, along with the African American, European and the Indian American community.  We cannot understand the fabric of the American society if we do not mention these important roots,” he said.

“I hope you will enjoy the exhibition and have a chance to build with us bridges that will cross boundaries, bridges that connect peoples, cultures, societies and nations, bridges that no wall will ever tear apart.”

Mundy called the inclusion of the painting in the exhibition, which runs through Oct. 15, a long overdue recognition for a masterpiece that was hidden in plain sight.

“Villalpando has a very special way of painting the emotion in scenes. In this one, you can see that response of all of the figures to the Christ Child, who is seated on Mary’s lap. You can see the awe and the adulation that the magi are feeling, and you can see the wonderful, calm serenity in Mary’s face, and the way she’s holding the baby,” she said.

“What’s also fabulous is, the big crowd scene behind them, and every member of the crowd whose peering in to see the Christ Child as he’s seated on his mothers’ lap has their own distinct personality and response to this event.” 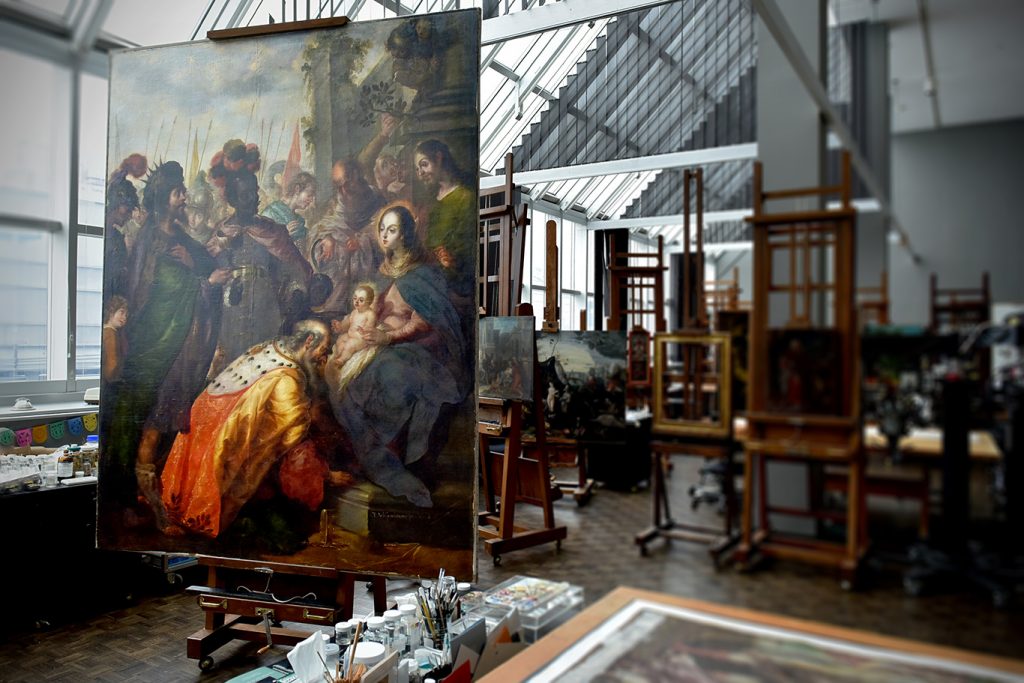