skip to main content
Return to Fordham University
You are at:Home»Inside Fordham»Administration Building Named for Alumni 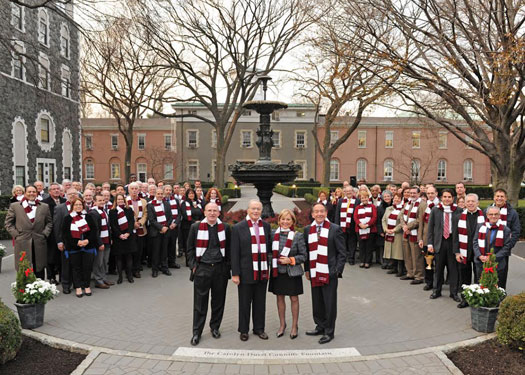 One of Fordham’s most stately structures has officially received a new name, honoring an alumnus and benefactor who has been part of the Fordham community for nearly seven decades.

The Administration Building, located in the heart of Fordham’s 85-acre Rose Hill campus, was officially renamed Cunniffe House during a ceremony held at the historic manor house on Dec. 4. The building, which houses the office of Joseph M. McShane, S.J., president of Fordham, and other administrative offices, was named for alumnus and trustee emeritus Maurice J. Cunniffe, FCRH ’54.

“I have had the great pleasure of knowing Mo Cunniffe for more than two decades,” said Father McShane. “He is a man of both great accomplishments and great humility. In naming the administration building Cunniffe House, we not only acknowledge Mo’s and [wife]Carolyn’s great generosity and service to Fordham, but their integrity and steadfastness. It is very much Fordham’s honor to be associated with their name in this public way.”

“It’s an incredible juncture that is marked by this fountain,” said Monsignor Joseph G. Quinn, vice president for University mission and ministry, who offered a benediction. “It is placed between Hughes and Dealy Halls, in front of Keating, and looks upon an iconic center of the long-term history of Fordham—the original manor, known for the longest time as the Administration Building, but which today, thanks to the Cunniffes, takes on a whole new name.”

During the ceremony, Father McShane and the Cunniffes unveiled a portrait of Mo Cunniffe painted by artist Mark Hess. The portrait now hangs at the western entrance of the building, near the “historic doors through which people will pass, as they have for more than a century, to support and aid the noble mission of Fordham,” said Msgr. Quinn.

“If there is one couple that typifies the warmth, decency, and generosity of the Fordham Family, it is Mo and Carolyn,” said Roger A. Milici, Jr., vice president for development and University relations. “I have been the beneficiary of their wisdom and friendship from my first day here. They helped make Fordham a welcoming place for me, and by bestowing their name on Cunniffe House, they make the University a more welcoming place for all.”

Cunniffe was a 2010 recipient of the Fordham Founder’s Award, which recognizes members of the University community whose support has been extraordinary. The chairman and chief executive officer at Vista Capital Corporation served as a trustee for both the University and Fordham Preparatory School, of which he is a 1950 graduate. During his eight-year tenure as a trustee, the University saw such transformative events as the launch of its Excelsior | Ever Upward | The Campaign for Fordham, a $500 million capital campaign designed to bring Fordham into new era of preeminence.

Cunniffe said that his gift to Fordham not only pays tribute to his family’s legacy (his nephew is a 1993 graduate of Fordham Prep, and his grandson is a senior in the Gabelli School of Business,) but also recognizes and supports the place that has been like a home for nearly his entire life.

“It’s in my bones,” Cunniffe said. “I had lived within walking distance of Fordham, and then I started the Prep in 1946. But I’d played on the campus even before that. So in some ways, I’ve been hanging around Fordham my whole life.”

Much about the campus has changed since his days of studying Latin, Greek, and physics at the University, Cunniffe said. For one thing, the bricks and mortar on campus today were largely nothing more than trees and turf.

“There were no buildings between the front gate and Duane Library. Residence halls such as Campbell, Salice, and Conley, and even the library weren’t there. It was just green,” he said.

Nevertheless, the building that will bear Cunniffe’s name was a centerpiece even on the campus Cunniffe knew, as it is one of the oldest buildings at Rose Hill. Built between 1836 and 1838, the building has stood throughout Fordham’s evolution into the institution that it is today. The Greek revival manor house sprang up right before Rose Hill transitioned from Fordham manor—the property granted to John Archer in 1671 by the British royal governor of New York—to St. John’s College. New York’s Archbishop John Hughes purchased the property in 1841 to establish what would become today’s Fordham University.

Now, Cunniffe hopes that the newly dubbed Cunniffe House will continue to see transformations for the better.

“Fordham is aspiring to not just do a competent job, but to become a first-class institution,” Cunniffe said. “Fordham will continue to get better, but that doesn’t change overnight—it changes over time.”

Watch a video of the ceremony:

In addition, see footage of remarks made during the evening’s fetivities here.