skip to main content
Return to Fordham University
You are at:Home»Arts and Culture»Demystifying the Business of Performing Arts

It’s been six years since Fordham and the Julliard School first collaborated on a course focusing on the business of the performing arts.

Now William F. Baker, PhD, the Claudio Acquaviva SJ Chair and Journalist in Residence, has compiled a new book that culls some of that class’s major notes.

Baker, together with Evan Leatherwood and Warren Gibson, PhD, has published
The Worlds a Stage: How performing artists can make a living while still doing what they love (American Management Association, 2016). The book follows the storied history of the performing arts and finds that, while the artists’ world has changed, their struggle to make a living has not. 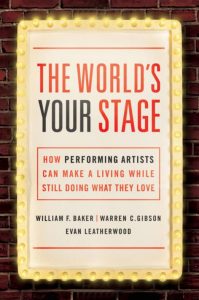 “The fine performing arts have forever existed in a precarious position,” said Leatherwood, a Slifka Fellow at Fordham’s Bernard L. Schwartz Center for Media, Public Policy, and Education. “We’re letting people know that is normal, but we’re arming them with current knowledge.”

The book’s section titles suggest that the artist’s history of struggle and triumph is a long one. Sections include “Mozart and the Hustler,” “George Gershwin Catches a Wave,” and “Beverly Sills: Artist, Manager, Mom.”

“Only in the 20th century did people really begin to do this full-time,” said Baker.

But the book doesn’t linger in the past for long. Many contemporary managers who were guest lecturers for the Fordham/Juilliard class made themselves available for interviews—such as Peter Gelb, manager of the Metropolitan Opera. The book documents how Gelb’s embrace of technology has brought the world’s largest nonprofit performing arts institution into the 21st century.

The digital platform that has taken Met performances to millions of new viewers through its Live in HD broadcasts is examined in “The Technology Gamble.” These live broadcasts, which are shown in movie theaters around the world, bring in $17 million annually. Yet, Baker said, the institution’s budget of nearly $325 million often operates at a loss.

Baker said that most of his students, both artists and business majors, don’t realize that 30 percent of an arts institution’s budget comes from philanthropy, not ticket sales—something explained in the chapter “Fundraising.”

“When you are a performer, you don’t go back to your dressing room and relax,” said Baker. “If somebody applauded for you, you go out and find them and become their friend, because you’re going to need their support.”

Others featured in the book are Carnegie Hall Executive and Artistic Director Clive Gillison and the American Ballet Theater’s former CEO Rachel Moore.