skip to main content
Return to Fordham University
You are at:Home»Arts and Culture»Happy Homer Halloween! 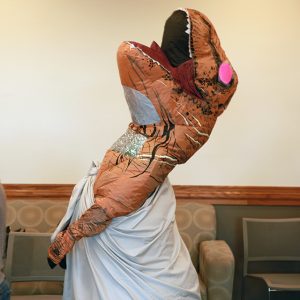 Organizers challenged students from all disciplines to name as many Rose Hill trees by both their common name and their Latin name. The contest winner was announced at a Halloween party where guests dressed up as their favorite Homeric characters.

One common denominator for everyone attending, including biologists, classics majors, anthropologists, and more, was an appreciation for Latin. Anthropology major John Perroni said that he likes to attend as many events thrown by the Classics Club in order to brush up on the language—he encounters Latin through forensics and biological anthropology, which use plenty of Latin derivatives.

“I feel like if I know the Latin and I come to a term that I’m unfamiliar with, I’ll be able to figure out what it means,” he said. 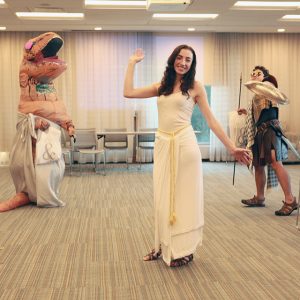 For sophomore Blair Brunetti, winner of the tree-naming competition, Latin is big part of her biology curriculum. She said that while attending a Classics Club event at the herbarium at nearby New York Botanical Garden (NYBG), she began to understand how plants were named.

“A lot of the plants are named after the people that discover them or for their characteristics, like there was one plant that used nasum, which is the [Latin] word for nose, because the leaves looked like a nose,” she said.

The tree contest turned out to be a two way street, as many of the Latin majors found an appreciation for botany. Classics graduate student Harrison Troyano said he recently presented a paper on the flora and fauna found in Seneca’s Oedipus.

“I see that my interest is not just something for a paper, but that it might be more useful in the future,” he said. Fordham’s strong biology department, as well as its proximity to NYBG make for “more opportunities that I have here at Fordham—and that makes botany more enticing.”

Just as Troyano was speaking of Oedipus, a reference to the play arrived in the form of Devin D’agostino, dressed as a dinosaur in a toga: Oedipus Tyrannosaurus Rex.