skip to main content
Return to Fordham University
You are at:Home»University News»Author of Young-Adult Books Sees Writing as the ‘Best Buzz’
Photos by Dana Maxson
“I’m here on earth to make sure people understand that teenagers’ emotions are absolutely relevant, absolutely no different than mine—and I’m nearly 50,—and no different than my 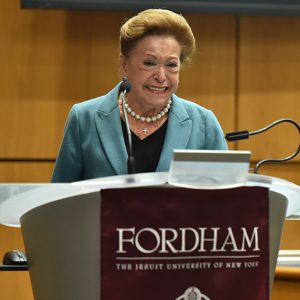 “Take yourself seriously enough to do your best job,” author Mary Higgins Clark told students at a lecture featuring A.S. King. “And stick with the dream.”

mother’s—and she’s nearly 90,” said A.S. King. “Emotions are emotions, it’s just our culture that mixes it all up.”

King, a bestselling author of young adult (YA) books and the 2017 Mary Higgins Clark Chair in Creative Writing, made her remarks at an Oct. 2 lecture on the writing process. The author of nine YA novels said that, even as a teen, she wanted to write books that help teenagers and adults understand each other better.

“To assume that teenagers and I aren’t having the same emotions is to underestimate both teenagers and emotion,” she said in her talk, Writing Novels—Trust the Process, Work Often, Die Happy. “To assume that we must regress to find the voice that fits the child or teenager is some sort of weird adult idea that our emotional processing changes over the course of time, and I don’t believe it does.”

King said she has little interest in fame and writes because she wants to help people. Regarding the nuts and bolts of her writing process, King called herself a “pantster” as opposed to a “plotter,” meaning that she writes by the seat of her pants. 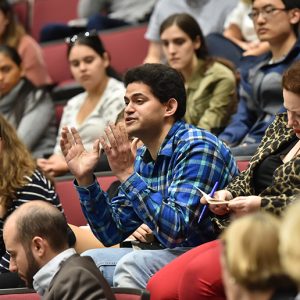 “When I’m working in fiction, I’m much like a kid who hasn’t done her homework but who also doesn’t care about not having done her homework,” she said. She likened her creative process to “a walk off the trail with no compass on a cloudy night, with no Polaris.”

Her own characters speak to her and unfold over the course of writing a story, she said,—sometimes even to her surprise. Once, one her characters revealed a secret to her that left her pacing through the rooms of her home. She called such cathartic moments “plotgasms”: surprising plot turns that elicit identical emotions in both the writer and the reader as they unfold.

An accountant’s daughter, King described a free-form process of writing akin to stream of consciousness, which she then offsets with a variety of strategies to hone the plot. Her organization tools range from keeping a daily diary to recording notes on the Siri app to using color markers that correspond to characters.

Making Time for the Work

As writing is hard work, King said she carries her laptop with her daily to steal away time to write.

“I have two grown kids, orthodontist appointments, band camp, and midnight trips to Target to buy that thing that I forgot when I was at Target last,” she said. “But nothing stops me from writing, even if it’s a half hour before bed.”

She said that, when people tell her that they’d write a book if only they had more free time, she balks.

“I do not have free time. Our bank accounts, in the bank of time, all read the exact same number. None of us are poor or wealthy.

“When I’m done with all the things I have to do to take care of my family and my community, I choose to write books,” even if that means no television, not enough sleep, and a limited social life, she said.