skip to main content
Return to Fordham University
You are at:Home»University News»Vatican Archbishop Warns of “Self-Defeating” Nationalism
Photos by John O’Boyle
“Nationalism is the Achilles’ Heel of much of our history of the last two centuries, and we don’t want to repeat that,” said Archbishop Paul Richard Gallagher, secretary of relations with states in the Holy See’s Secretariat of State.  “Nationalism is self-defeating and tends to lose track of truth, in terms of interpretation of history and of issues.” 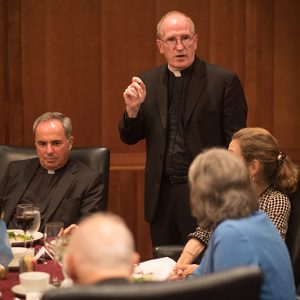 Joseph M. McShane, S.J., president of Fordham, reminded the crowd that the Irish-born founder of Fordham, Archbishop John Hughes, had to contend with nativist bigotry.

Archbishop Gallagher made the remark at a Sept. 26 address, “The Holy See Perspective on Contemporary International Issues,” held on the Lincoln Center campus. His appearance at Fordham culminated his weeklong visit to the United Nations for a meeting of the General Assembly.

The event was sponsored by the graduate program in International Economy and Political Development and the Centesimus Annus Pro Pontifice Foundation.

The archbishop’s address covered a host of issues spurred by “increased tension and conflicts in vast areas of the world.” On the subject of nationalism, he shared various papal opinions: Pope Paul VI once identified nationalism an obstacle to peace and development, while Pope Pius XII said that “a committed Christian cannot withdraw into a convenient or selfish ‘isolationism’ when he sees the needs and extreme poverty of his brothers and sisters.”

“Love of one’s own country and culture is obviously a virtue,” he said. “Yet such love is a Christian virtue only if it embraces love for all men and women …  A nationalism which is not ‘ennobled by a love for the whole family of men’ is a deficiency of Christian love.  Love for one’s country is limited by the requirements of justice towards our neighbor.”

Challenges brought about the current migration crises have been complicated by nationalistic tendencies in countries hosting migrants and refugees, he said. But  it would be “foolish” for the church to underestimate the difficulties of integrating people into “a harmonic society that is well established.”

“We have obviously made enormous mistakes—you see that reality in certain quarters of Paris in Marseilles, and in Brussels [where migrant communities]are not integrated at all.

“But we have to move things forward through education, generosity, and correcting injustices—and there are many injustices.”

If that message does not get out, he said, the backlash against those who are suffering will only increase.

“We have the capacity to do it, but we need fresh ideas,” he said. “The pope said on various occasions that the crisis we’re experiencing now is not a crisis of migration, it’s a crisis of solidarity.”

“Without solidarity, there will be pushback that is going to create incredible suffering . . . and resentment in many of these countries.”

Archbishop Gallagher said he believes a nation can preserve its national identity while also helping migrants and refugees. He pointed to North America—and the United States in particular—as a place of strong national identity that has also historically welcomed refugees.