skip to main content
Return to Fordham University
You are at:Home»Inside Fordham»Urban Sociologist Publishes Book on the Detroit Newspaper Strike

An introduction was delivered by Dorian Warren, Ph.D., assistant professor of political science at Columbia University and former student of Rhomberg’s.

Rhomberg, associate professor of sociology, read a selection from his book, which discusses the newspaper strike in Detroit during the 1990s. In his book, Rhomberg argues that unions go to the table wanting to negotiate the terms of employment while employers want to do away with the table entirely. 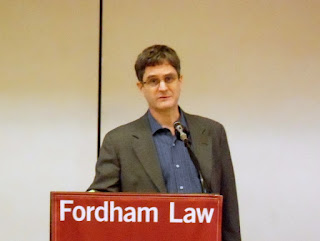 The event was sponsored by the Department of Sociology and Anthropology and the Urban Studies Program at Fordham, the Russell Sage Foundation, and the National Writers Union / UAW 1981.