“We can thank a lot of people along this road,” said senior Colin Sheeley, the paper’s editor-in-chief. “Throughout the years there’s been past staffs that helped us figure out how to fill in the holes and make the paper the smooth efficient machine that is has become.” 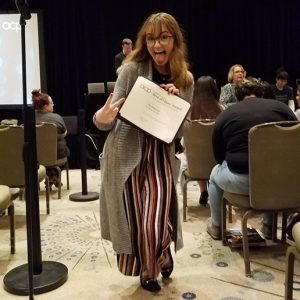 Indeed, the group has an Observer veteran in its adviser, Anthony Hazell, FCLC ’07, who played many roles at the paper when he was a student. He said he’s proud of the staff and the work they put out.

“They were honored for work that held the Fordham community accountable to uphold its ideals and values,” said Hazell.

The top category win was specific to newspapers that are not weekly and come from four-year colleges (The Observer comes out bi-weekly, except during breaks). The award was complemented by several other recognitions, including fourth place in the Best of Show Four-Year Website and sixth place for Best of Show Newspaper In-Depth News Special Section for a special themed issue on love, sex and relationships.

Articles from the winning Jan. 24 issue that brought a campus focus to national and international issues, such as the government shutdown, the Jesuit sexual abuse scandal, and a photo essay on Bilbao, Spain, all contributed to the first-place honors.

From sexual health and pickup lines to e-cigarette use and a Fordham-focused crossword, the latest iteration of the 38-year-old paper continually finds new ways to remain relevant. Among them: “engaging layout and design” and a renewed social media presence, said Sheeley.

For online editor Courtney Brogle, a junior who went to the convention, the website win points to the future of student newspapers– and journalism in general.

“As much as I love the feel of paper, whether we want to acknowledge or not, digital is the way of the future. It makes us eager to improve the website for our readership,” she said.

Brogle tipped her hat to social media editor Shamya Zindani for helping set the strategic tone for digital distribution across platforms. She said that the team encapsulates articles for Facebook with an eye on alumni, while Instagram posts incorporate a more student-focused voice.

She said the convention was a great place for sharing ideas.

“It was so much fun, there were so many colorful and diverse voices; we’re going to get some really fun stuff going this semester based on what we learned,” she said.

Brogle said the dedication of visual adviser Molly Bedford, a staff editor at The New York Times and an adjunct in the Visual Arts Department, was key to a successful redesign of the website.

For Sheeley, the awards for both the print and web reflect a storied past and promising future. But he credits the entire staff with preserving The Observer’s overarching mission.

“We break down ideas and what’s affecting [students],” he said. “You might think of some of these issues as so far removed from a college student’s everyday life– and that’s not the case most of the time.”

He added that the paper remains integral to the institution at large.

“As a student newspaper we find it our responsibility to address concerning issues,” he said. “It’s a very important responsibility; we are the student voice of Fordham College at Lincoln Center. When people come to us, we’re going to tell their story and tell it responsibly.”