skip to main content
Return to Fordham University
You are at:Home»University News»Television Executive and Fordham Trustee Emeritus Herb Granath Dies at 91
Photo by John Roemer
Fordham Trustee Emeritus Herbert A. Granath, FCRH ’54, GSAS ’55, a former president of the Academy of Television Arts and Sciences and a pioneering force in cable television, died on Nov. 26 in Stamford, Connecticut. He was 91 years old.

“Herb Granath’s passing is a great loss to Fordham, and of course to his family and loved ones—and in the latter category I would include everyone who ever had the pleasure of meeting him,” said Joseph M. McShane, S.J., president of Fordham. “Herb brought to Fordham a steadiness of heart, openness of spirit, and a strong faith that there was a world of possibilities waiting over the horizon. His great gifts of heart, mind, and spirit were readily apparent whenever Fordham’s Board of Trustees convened: when he spoke, we all listened, and listened intently.” 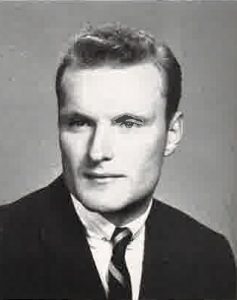 Granath in his 1954 class photo

Born and bred in Brooklyn, Granath started in the television industry as an NBC page during his college years and steadily climbed the ranks of entertainment juggernauts, moving from NBC to ABC to ESPN and the Broadway stage. He made his name in the then-nascent world of cable television, rising to become chairman of the board of ESPN (and later chairman emeritus) after ABC purchased the cable channel in 1984. He’s the recipient of two Tony Awards and six Tony nominations, an International Emmy Award for Lifetime Achievement in International TV, and a U.S. Emmy for Lifetime Achievement in Sports.

His career was a tribute to a liberal arts education. He parlayed an undergraduate education in physics to a graduate degree in communications, and spoke specifically to the value of both degrees in advancing his career.

“One of the reasons I enjoyed physics was looking into the essence of things,” he said in an interview with Fordham just before the University honored him with its Founder’s Award, adding that a course in logic was among the most influential he ever took. “It is amazing to me in American business how little a role logic plays. It has been a hallmark of the way I approach business.”

His stint working evenings as a page at NBC inspired the young Granath to pursue graduate work in communications at Fordham. What followed was a career that redefined an industry. But when he saw the page position pinned to a bulletin board at Dealy Hall, he didn’t even know what the job entailed. He simply needed the work to get through school.

He also credited financial aid with helping him get his degree. He continued to generously support Fordham throughout his life and served as an honorary co-chair of Fordham’s Excelsior | Ever Upward fundraising campaign.

“Without financial help, I never would have been able to attend Fordham. Supporting the campaign is one way for me to repay the moral grounding I received at the University, which has served me well over the years both in my business and personal lives,” said Granath, who was elected to Fordham’s board in 1993.

At ESPN, Granath backed his business savvy with a sports fan’s enthusiasm. And while his love of sports helped the network grow to become one of ABC’s single largest profit centers, his other interests also spurred networks that would become household names, including A&E, The History Channel, and Lifetime.

In its infancy, during the 1980s, A&E was truly an arts and entertainment network that featured opera from La Scala and ballet from Paris, Granath said.

“It was gorgeous stuff,” he said. “We were the darlings of the critics.”

He also helped ABC branch into theater, managing its investments in partnership with the Shubert Organization. The relationship gave the network first dibs on plays that might make good television series. Ironically, Granath told his bosses at the network that he didn’t necessarily see Broadway as a profit-making venture.

In an amusingly understated 2004 interview for the McGannon Center TV Oral History Project, Granath told Fordham communications professor Albert Auster, “We got into something very early called Cats, we got into something called Phantom of the Opera, we got into Les Miserables, we got into the things that really have over the years turned out large sums of revenue and, therefore, profits for those who invested.”

Amidst the glamour of stage and screen, Auster noted that Granath maintained a low-key demeanor in an industry filled with massive egos. When asked how he managed to remain unassuming and rise so swiftly, Granath credited Fordham.

“Everyone knows that if you’re a Fordham graduate, no matter what it says on that piece of paper, you really majored in philosophy,” he said, which allowed him to take a “bit of a different point of view” and stay focused on what matters, a trait that came in handy in the entertainment business’s notoriously meandering meetings.

“My first reputation was established, I think, when I would sit back and listen to all this babble, and then about 20 minutes or so into the meeting, I’d restate the reason for the meeting. And people would go, ‘Wow, that guy really has it together,’” he said with a chuckle. “It’s a very simple prescription for success, but I’m afraid it may be all that simple.”

Granath held a number of other leadership positions, including trustee of the American Museum of the Moving Image, president of the International Council of the National Academy of Television Arts and Sciences, governor of the National Academy of Cable Programming, director of the International Radio and Television Society, and president of the Veterans’ Bedside Network. He served in the U.S. Army, assigned to Special Services as a writer/producer.

For all his success, Granath said business should always take a back seat to family.

“Business is business. It’s part of a life,” he told Auster. “The things that are the most important to me are the fact that I’ve got a wife and four young people that we brought into this world and they, in turn, now are forming their families.”