skip to main content
Return to Fordham University
You are at:Home»Inside Fordham»Tackling the 21st-Century Proliferation of Disagreement
Picture this: You believe capital punishment deters crime, but when you make your argument to a smart and well-informed friend whose opinion you respect, she disagrees. In fact, she presents an equally strong argument to the contrary.
Where might the conversation go from here, if anywhere?
Bryan Frances tackles this type of conundrum in Disagreement (Polity, 2014), which he describes as an introductory book on a subject that’s drawing heightened interest from philosophers in the Internet age. When everyone has access to the wealth of arguments and counterarguments that can easily be found online, deciding whether, and how, to disagree can be daunting. 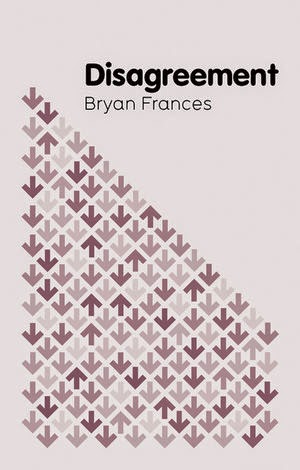 “It is one thing if you can say ‘they don’t have this key piece of evidence I have,’ but that doesn’t happen too often anymore,” said Frances, professor of philosophy. “No matter what you think, you can go onto the Internet and find a whole lot of really smart people who disagree with you and have some evidence that goes against yours.
“So how do you conduct your intellectual life? It’s more pressing now than ever.”
Among philosophy scholars there hasn’t been much written on disagreement, says Frances, who was approached by the publisher to write the introductory book. The interest in the topic has its roots in philosophers’ increased focus on religious disagreement—most notably in English-speaking countries where mass communication has made global religions, such as Islam, more visible to westerners.
And while the book offers no hard-and-fast advice, it does come to a conclusion on how to approach highly controversial issues such as capital punishment or the morality of abortion.
“In many of these instances, we probably would do well to suspend judgment and dig deeper,” said Frances, “even on those issues near and dear to our heart.”
Frances did not come gently into his philosophical scholarship. Before turning to the humanities, he earned bachelor’s and master’s degrees in physics with emphasis on quantum theory and relativity theory.
“Eventually I realized that the questions I wanted to ask about those topics were more philosophical than scientific,” he said.
Even though disagreement has been around since the beginning of time, Frances said, philosophers have only recently written about it in a “rigorous and thorough way.”  In fact, the void of scholarship made writing Disagreement difficult.
“I’d write an article about this topic and, because there was so little to go on, I’d end up disagreeing with my former self a few years later.”
Department of PhilosophyFordham University
Share. Twitter Facebook Google+ Pinterest LinkedIn Tumblr Email