skip to main content
Return to Fordham University
You are at:Home»Colleges and Schools»Gabelli School of Business»Rachel Ragone, Gabelli School Alumna and Founder’s Scholar, Dies at 22

Rachel Frances Ragone, GABELLI ’18, a Founder’s Scholar who graduated from the Gabelli School of Business despite a long battle with bone cancer, died on Sunday, Jan. 20. She was 22.

Rachel was diagnosed with Ewing’s Sarcoma, a type of pediatric bone cancer, as a teenager and spent a year in treatment before completing high school.

The Founder’s Scholarship enabled the Manorville, New York, native to enroll at Fordham in 2014, where she majored in applied acccounting and finance. She was named to the Dean’s List; was involved with Colleges Against Cancer; and raised funds for the Fordham Dance Marathon, which benefits the children’s cancer charity Be Positive.

Despite a reoccurrence of the cancer in 2016, Rachel continued her studies and joined her graduating class at Fordham’s 2018 Commencement on May 19. When the cancer returned a third time in July, three weeks after she’d begun an internship at JP Morgan Chase, Rachel had to set her studies aside. In December, shortly before she died, the University presented her diploma to her at Memorial Sloan Kettering Commack.

“Today we mourn with Rachel’s mother, Kim; her father, John; her brother, Andrew; and all of her friends, classmates, and faculty at Fordham,” said Joseph M. McShane, S.J. president of the University.

“There is no consolation for such a loss, but let us all remember Rachel as she lived: loving, idealistic, and full of dreams for the future,” he said.

‘She Just Wanted to Be Normal’

Kim Ragone, Rachel’s mother, said Rachel made the most of her time at Rose Hill. When she arrived on campus in September 2014, she was still feeling the effects of chemotherapy and had to wear a wig. Kim said her daughter’s doctor strongly suggested she ask for housing with a private bathroom and an air conditioner, but Rachel insisted she live like every other first-year student.

“I was like, ‘Where are you going to put your wig when you’re taking a shower?” Kim said.

“She didn’t care, she just did it. She hung it up with the bathrobe.”

“She just wanted to be normal, because everything was taken away from her, whether it was being able to go to school, driving, or working,” Kim said. “The time when she would have been doing normal things, she was in the hospital.”

Kim said that the semester Rachel spent studying at Fordham’s London Centre in the spring of her sophomore year was life-changing for her.

“[Fordham] gave her the best time of her life.”

Donna Rapaccioli, Ph.D., dean of the Gabelli School, said Rachel’s influence would live on at the college.

“Rachel was an inspiration, using her amazing intelligence and persistence to positively impact others, always with a smile,” she said. 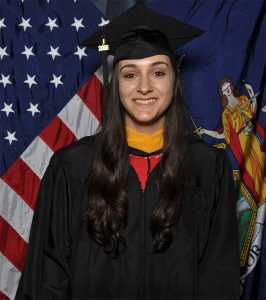 Remembering a Kind and Determined Friend

Colleen Dineen, GABELLI ’18, befriended Rachel during their sophomore year when Rachel approached her on the plane shortly before it took off for London. Dineen was crying at the time, she said, because she feared being away from her family.

“She sat with me for a bit and talked to me, and luckily, she didn’t think I was crazy,” said Dineen, a fellow finance major.

They hung out on weekends and arranged to take classes together, and even when Rachel had to take the spring semester of her junior year and the fall semester of her senior year off for medical leave, Dineen said that she still visited campus on the weeks she didn’t need to undergo treatment.

“She didn’t want to miss out, which is pretty remarkable when I think about it. That’s the type of person she was; she wouldn’t let anything get in her way or limit the life she wanted for herself,” she said.

When Rachel recovered and returned to Rose Hill the spring semester of her senior year, she and Dineen lived together in an off-campus apartment.

“She was tough, she was strong. She could have graduated fully in May with all of us had she switched her major, but she said, ‘I did not spend three and a half years at this school just to take the easy way out. If I have to take an extra class, so be it,’” Dineen said.

“She wouldn’t want to focus on herself, or her illness, she just wanted to have a normal friendship. She was truly the most caring person I’ve ever met.”

Jack Trevor, GABELLI ’18, met Rachel in class their first year, and the two bonded over their mutual adoration of Beyoncé, whose concerts Rachel loved to attend. He, too, studied in London with Rachel. On May 12 of last year, they celebrated their birthdays, which are a week apart, with brunch in Chinatown.

“We’re so grateful for that last semester. She got to come to all the senior nights, do the senior events like the Senior Ball, and she got to walk with us at graduation. I’m so grateful that she was able to do that with us.”

Connor Murphy, FCRH ’18, another friend who studied in London with Rachel, said he only learned of her fight with cancer when it came back the second time.

“She was one of those people who you would never be intimidated to talk to. She was lighthearted but also caring. She would never half-ass a friendship. She was just the kind of person you loved. She also made a really good Oreo cookie birthday cake,” Murphy said.

The University’s announcement of Rachel’s death on Tuesday moved Maggie Senft, FCRH ’17, who was a resident assistant in Alumni Court South when Rachel first arrived on campus in 2014, to reach out to Rachel’s mother with condolences. She told Kim she considers herself fortunate to have watched Rachel mature into “an incredible young woman.”

“Rachel goes down as being one of my favorite residents, even though we were not supposed to have favorites,” Senft said.

“She was one of the kindest, most easy-going, smartest girls I knew.”

To honor Ragone’s “steady perseverance, spiritual fortitude, and deep compassion,” Fordham has established a scholarship in her name.