skip to main content
Return to Fordham University
You are at:Home»Editor's Picks»On Fordham’s 175th Anniversary, a Look Back to a Very Different Time
A plaque next to Collins Hall marks the spot where professors Roger Wines and Allan Gilbert (left, right) conducted an archaeological dig into the foundations of Rose Hill Manor, the 18th-century farmhouse that was one of the original buildings at the Rose Hill campus. Photo by Dana Maxson
Today, Fordham is the Jesuit university of New York. At the time of its founding, however, it was anything but.

“An unfinished house in a field” is how Archbishop John Hughes would later describe the state of Fordham’s property at the time he bought it in 1839. The first Jesuits wouldn’t arrive until 1846, five years after the small college was up and running. Meanwhile, going south into New York City was a tougher trek in those days before cars and commuter trains—and that’s just how the college fathers liked it.

“They didn’t let the students go down to the city. The city was considered ‘sinful,’” said Roger Wines, PhD, professor emeritus of history.

He and anthropology professor Allan Gilbert, PhD, have researched and written about early life at Fordham for years, drawing on the meticulous records kept by Fordham’s early Jesuits as well as their own excavations at the Rose Hill campus. Their archaeological work, part of which they write about in a soon-to-be-published book, helps illustrate just how different life was in the early years of Fordham, which was founded as St. John’s College 175 years ago on June 24, 1841.

For one thing, the small, rustic college was also a working farm, Wines noted. “The students lived here in an atmosphere where the grape jelly came from the grapes [and]the milk came from the cows,” courtesy of the live-in Jesuit brothers who also shoveled the coal, tended the grounds, and staffed the infirmary, among other labors, he said.

Water came from wells, baths were once-a-week, and recreation tended to get the blood pumping, according to Wines and Gilbert. In the summer, it was swimming in the Bronx River or cross-country hikes to the Harlem River or Pelham Bay, led by Jesuits who believed in physical exertion. In the fall,  college elders would block the flow of a stream to create a pond where the campus’ large parking lot and garage sit today, and students skated on the pond when it froze over in the winter, Gilbert and Wines said.

In fact, ice skate fragments were among the many artifacts they found buried in the earth at the heart of the Rose Hill campus. 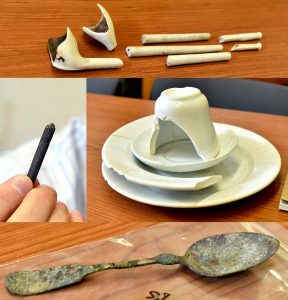 Artifacts from the early years of St. John’s College: pipe fragments, a place setting from the dining hall, a silver spoon, and a pencil. (Photos by Dana Maxson)

In 1985, Wines and Gilbert sought permission from Fordham’s then-new president—Joseph A. O’Hare, SJ—to excavate the foundations of Rose Hill Manor, the colonial-era farmhouse that served as one of the original campus buildings. They won over Father O’Hare by taking him to the spot where they wanted to dig: “We said to him, ‘Six feet down is the 18th century.’ He said, ‘Okay, go for it,’” Wines recalled.

For the next 17 years, they mobilized students from their history and archaeology classes for the digging, covering the crumbly innards of the site with tarps in the off-hours to protect them from the elements. Within a few years they had cleared out one corner of the manor’s cellar, finding a wood floor, brick cisterns, impressions of floral-patterned wallpaper, a bin full of anthracite coal, and many fragmentary objects.

They also dug in various other places around the Rose Hill campus, including, in 1986, the construction site for two residence halls–Loschert Hall and Alumni Court South–after work crews discovered two pits containing pre-1877 refuse from the college. They explored cisterns, drainage basins, and ditches around campus, compiling a list of archaeologically valuable locations.

Their collection of artifacts includes pipe stems, patent medicine bottles, the college’s first set of dishes, rods of lead for writing on slate, and the remains of a toothbrush made from bone and hog bristles. They found dice, combs, pottery, and religious medals, and a remnant of one of the era’s advances in communications field: the nib of a steel pen, a device that allowed for easier writing than did the goose-quill pen that came before.

Writing—or, more to the point, penmanship—was a key part of the curriculum, and was especially important for finding a job. “Employers judged your character and fitness for the job on how clearly you could write,” Wines said. Students also studied Greek, Latin, history, literature, and other classic subjects in a custodial, highly structured setting. Students lived barracks-style in wings that were added to what is today Cunniffe House (the “unfinished house in a field” Hughes referred to), the same building in which they attended class. Rose Hill Manor had various occupants over the years, including Jesuits-in-training.

Students followed a six-year curriculum—modeled on a European lycee—that the Jesuits brought with them in 1846. It comprised three years of grammar (corresponding to an American secondary school) and three years of college-level humanities. After six years, students received a bachelor’s degree, and those who stayed for one more year could earn a master’s in philosophy.

The students numbered anywhere from 100 to 200 for the first few decades, and some were adolescents, possibly as young as 10.

Unlike the College of St. Francis Xavier, the companion college founded in Manhattan by Fordham’s first Jesuits, the college at Rose Hill could draw students from beyond the New York area because it was a boarding school. About a third of the students were Latin American boys from merchant-class parents who wanted them to be able to speak English and do business in New York while also maintaining their faith.

“This was a good place to send them because they would be in a safe Catholic environment,” Wines said. “Nothing bad was going to happen to them.”

Vice wasn’t the only worry in the city to the south; hostility to Catholics in New York led Hughes—named the first archbishop of New York in 1850—to buy the college’s land through an intermediary, Gilbert said. Hughes also made sure the charter for the school was approved before announcing it was being taken over by Jesuits, whom critics considered to be “political priests,” Wines said.

The Jesuits brought a rigorous system with them in 1846. Students cycled through a regimen of prayers, study halls, classes, meals, and occasional recreation that stretched out across six-and-a-half days a week. (The weekend hadn’t been invented yet.) They began the day by washing their faces in sinks filled by a servant who’d drawn water from the well outside, and everyone went to bed at the same time every night when the candles or whale oil lamps were snuffed out.

The students stayed in this closely supervised setting for a longer school year, one that lasted until mid-July. One principal teacher taught all major subjects to each class, paying close attention to the moral as well as intellectual formation of students. “They really took care of you for a whole year” and found out everything, including “things you probably wish they didn’t,” Wines said.

Recreation consisted of ball games or indoor games played with plain objects like marbles or dominoes—which Gilbert and Wines found during their excavations—or, simply, words and imagination. “There was nothing to buy; you just made it up,” Gilbert said.

He and Wines have put much of the relics into safe storage in Dealy Hall and are exploring the possibilities for finding them a new space. Wines is working on a book about the early history of Rose Hill and the Bronx, and he and Gilbert wrote a chapter about their excavation of Rose Hill Manor for a forthcoming book, impishly titled Digging the Bronx.

In its pages, readers will see the many ways in which schools, colleges, and other institutions are exploring the history of an area that has been transformed from countryside into a major metropolis, all within the lifespan of Fordham.

“It’s a range of different kinds of applications, so that people get a sense for how many sorts of people are out there digging in the ground,” Gilbert said.